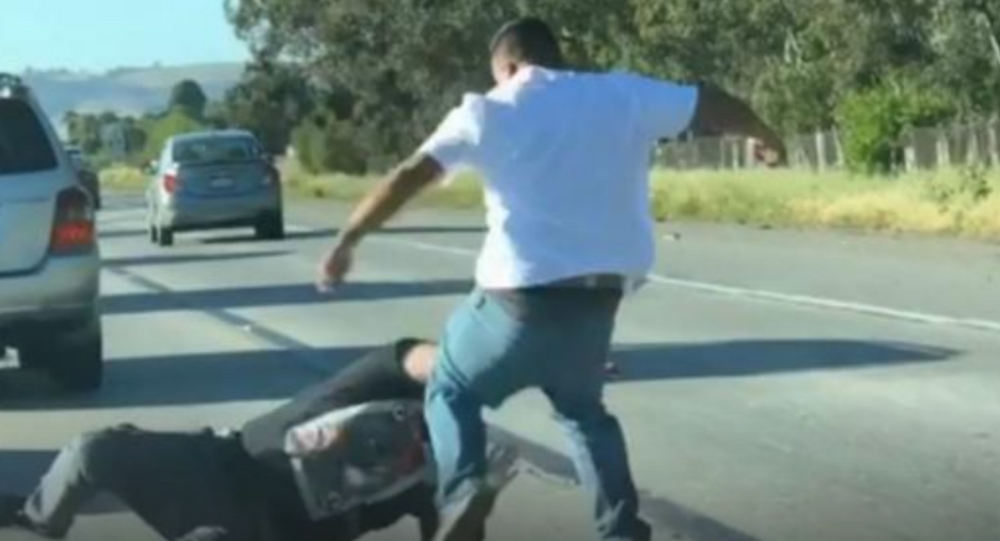 Some people were just not feeling the holiday spirit this Easter.

According to Mallery Petty, the woman who took the video and posted it on Reddit, the brawl between the two unidentified men occurred at around 6 p.m. Sunday in San Martin, a census-designated area in Santa Clara County, California. Petty snapped the video while driving in her car on the highway.

In the clip, the two men can be seen punching each other in the middle of the highway, as cars swerve by to avoid hitting them. At one point, one of the men falls to the ground, after slightly brushing against a car driving by, only to find himself kicked twice by the other man.

According to Petty, before the fight broke out, one of the men involved was swerving in and out of traffic. At one point, the driver of the swerving car pulled over on the right side of the highway, putting his vehicle in park before getting out.

The other man, who was driving in front of the swerving car, then decided to stop and get out of his car. The brawl between the two erupted shortly afterwards, although it is unclear which driver instigated the altercation.

After exchanging punches for around 60 seconds or so as numerous drivers on the highway honked at them, the two men eventually hopped back into their cars and drove away, Petty noted.

"I think that it's kind of a normal thing in these parts," Petty told NBC News, seemingly unfazed by the incident.

"This is what I never got about people. Is road rage really that serious? You going to get worked up because you're 45 seconds late to work or something?" one Reddit user commented on the video.

"I used to get so pissed and drive so fast and aggressively until I realized that I was only saving like 2 minutes max on my 40 minute drive over driving safely and courteously, which was way less stressful," another user commented.

The California Highway Patrol (CHP) reported to the scene of the incident, presumably after being alerted by other concerned drivers on the congested highway. However, by the time CHP officers arrived, the men had already fled the scene.

The CHP, which has decided not to carry out an investigation of the incident, did not immediately respond to Sputnik's request for more information.