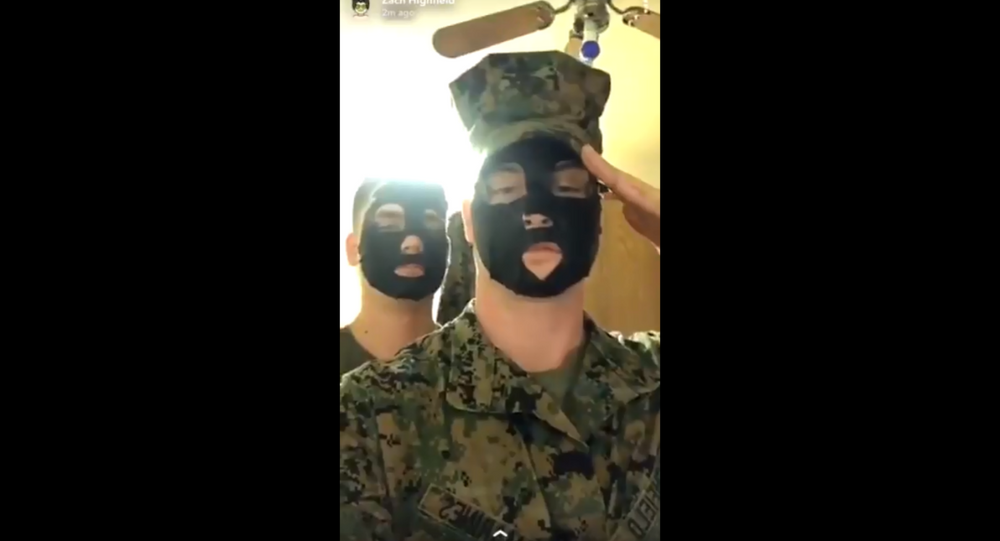 Two servicemembers with the US Marine Corps recently came under investigation after video surfaced on social media showing the pair posing in blackface and using racially charged language.

The video, which was initially posted on Snapchat before being widely shared on Twitter, begins with Zach Highfield and an unidentified Marine both appearing in their uniforms and using a charcoal cleansing mask to pose in blackface.

After the unidentified individual says "blackface," Highfield responds by saying "good morning, sir." He later proceeds to put on his cap and salute. The video cuts off with the unidentified Marine saying, "Hello monkey."

​While the name of the second Marine is still unknown, the Marine Corps Times did report that the pair belong to the 3rd Marine Aircraft Wing (3rd MAW), which is based out of Miramar, California.

Speaking briefly to San Diego outlet KPBS News, Highfield claimed that he didn't mean to post the images and that he took full responsibility for his actions.

"It looks a lot worse than it is," he told the outlet. "It was a bad mistake. We had no intention to offend."

Highfield also indicated that his superiors have reached out to him regarding the Snapchat post.

A spokesperson for the 3rd Marine Aircraft Wing confirmed to the Times that it has launched an investigation into the footage in order to "determine the facts and circumstances surrounding the content."

"Our leaders are committed to maintaining an environment of professionalism, dignity, and respect," the statement continued. "3rd MAW takes all allegations of discriminatory behavior very seriously, as they stand in stark contrast of our core values of honor, courage and commitment and do not reflect the discipline and professionalism of the Marines and Sailors of 3rd MAW."

Such behavior, however, isn't completely unheard of. According to the Times, there have been at least three other incidents that surfaced in February alone in which a Marine or former Marine was linked to allegations of racism, white nationalism or promoting anti-Semitic messages and Nazi propaganda.

Over the weekend, netizens were abuzz after it was revealed that the Twitter handle @Jacobite_Edward was reportedly tied to Lance Cpl. Mason Mead, who was identified by military website Task & Purpose as an "infantry assault-man with the 1st Battalion, 3rd Marines in Hawaii."

The since-deleted account included scores of pro-Nazi images and even included a photo from a field training exercise that was captioned, "Hello, fellow black men." The photographed Marine is seen wearing a dark camouflage on his face. It's unclear if the individual is Mead.

​Another photo from the deleted account showed explosives being arranged in the shape of a swastika, which was captioned "epic."

​An investigation into Mead is presently ongoing.

© CC0
US Students Share Mock ‘Passes' Allowing Them to Use Racial Slur (PHOTO)
In early 2018, it was also revealed that an active-duty Marine was also a member of the US neo-Nazi organization Atomwaffen Division and participated in the "Unite The Right" rally in Charlottesville, Virginia, in 2017. In online forums, Lance Cpl. Vasillios Pistolis bragged about attacking a woman at the event. A court-martial later found him guilty of making false statements and failing to obey orders and booted him out of the service in August 2018.

Pistolis was based out of North Carolina's Camp Lejeune before his removal, and as Sputnik previously reported, two other Marines from the same base were arrested in May 2017 for flying a white supremacist banner at pro-Confederate rally. Task & Purpose reported that one Marine was "administratively separated" from the service in April 2018 and that the other was discharged in December 2017.