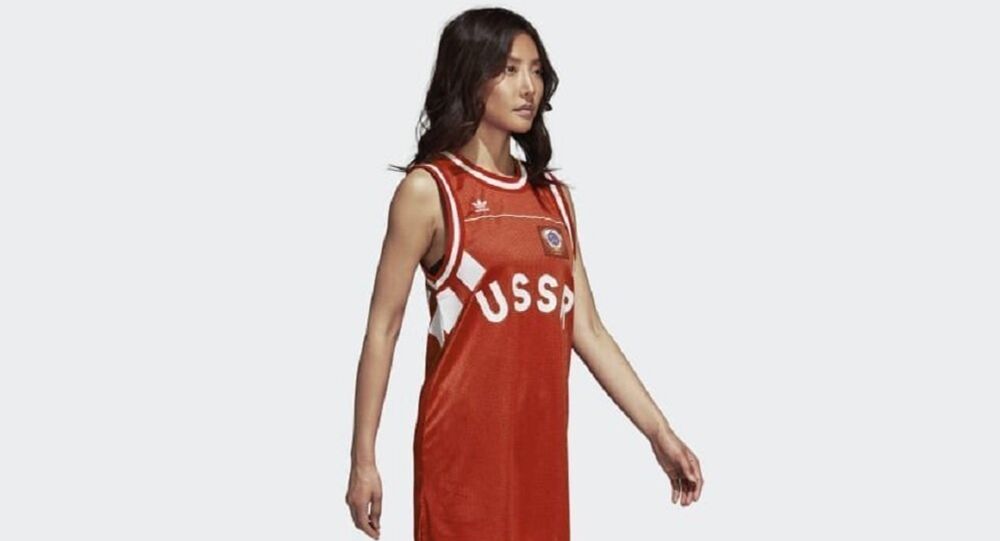 Adidas has launched a vintage model of trainers with the word “Moskva” written on them. The classic model number 350 with stripes of three different colors will hit the stores on May 19. It is not the first pair of the brand's shoes to feature Soviet symbols, and the tendency has struck a chord with some of Russia's neighbors.

The Lithuanian Foreign Ministry lashed out the other day at a red T-shirt dress with the Soviet emblem and the abbreviation "USSR" on it, reproaching the German sportswear manufacturer for indulging in "unhealthy imperial nostalgia."

Being sick with "imperial nostalgia" — it still occurs. A bit surprising from the famous @adidas, though. https://t.co/fRjAQCH525 pic.twitter.com/kgdGobszTS

The model was notably inspired by Soviet sports fashion of the late 1980s, and is dedicated to the upcoming FIFA football championship, which Russia is due to host from June 14 to July 15. Ten years ago, Lithuania adopted a law that bans showcasing the USSR's emblem, even in the context of fashion; perpetrators may face an administrative penalty and a fine of up to 289 euros.

Nevertheless, Western buyers should take it easy: the Soviet-inspired retro fashion has been on the world’s catwalks for many years now.

One of its popularizers is notably Moscow designer Gosha Rubchinsky: last year, Adidas collaborated with him to launch a collection of T-shirts with the inscription "footbal" on them also, in the run-up to FIFA 2018.

Other European brands, from Comme des Garçons to Burberry, partner with Rubchinsky as well. One of his most recent fashion hits is sports trousers tucked into socks and sweatshirts featuring a well-known Soviet slogan: "Ready for labor and defense" as well as "Sport." US designer Heron Preston offered his clients hoodies featuring "Style" in Cyrillic characters, and a propos, Kanye West and his little daughter were caught on camera wearing these during their family walk.

Soviet aesthetics are also central in some collections by co-founder of the French fashion brand Vetements, Georgian designer Demna Gvasalia. His laconic, mostly baggy and loose items made of flowy fabrics echo the beauty standards of the late Soviet era, which appeared to suit the taste of a number of top celebrities, including Rihanna.

Ukrainian designer Yulia Yefimchuk is no less inspired by the Soviet history and propaganda posters from her Soviet childhood.  She launched a collection of factory-style clothes a couple of years ago and it immediately struck fashion enthusiasts’ fancy and dominated for long the pages of slick magazines.

Separately, several years ago, Polish designer Gosya Bachinska, whose work is very much appreciated by Kate Middleton, among others, launched a collection called "Yalta," which commemorated the meeting of the anti-Hitler coalition leaders during WWII. Bachinska’s models strode along the catwalk wearing blouses adorned with brooches imitating medals.

Unlike Lithuania, which is up in arms against the Soviet symbolism, another Baltic state, Estonia, views it more favorably. In particular, fashion guru Marit Ilison sews coats from Soviet woolen blankets, which remain perfectly familiar to many Soviet generations.

The trend started by Soviet-born designers was promptly borrowed by international fashion houses. For instance, Urban Outfitters, popular for its street fashion collections, released hoodies and T-shirts featuring the Cyrillic version of “Equality,” which essentially is a cue of the Soviet symbolism entering the mass market.