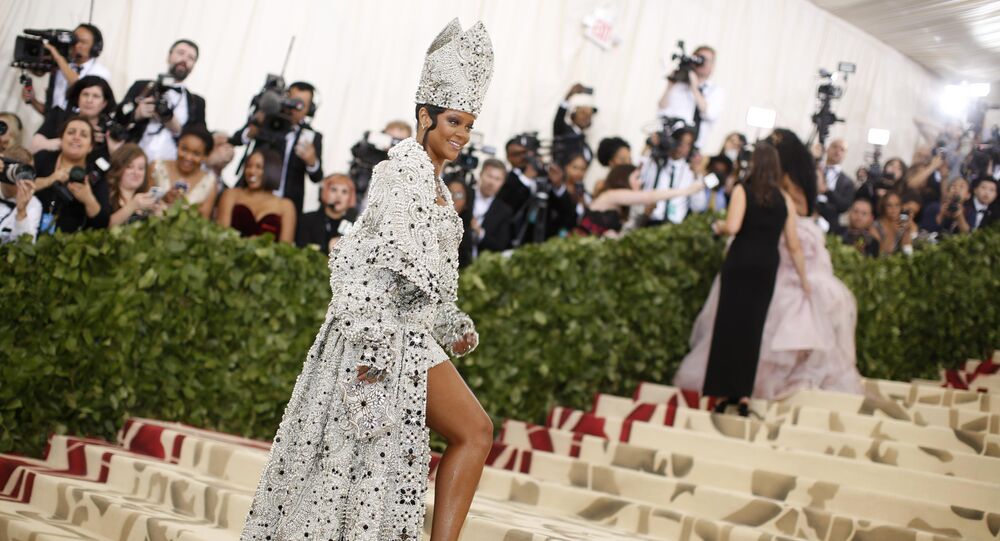 The gala, which is essentially a fundraising benefit for the Metropolitan Museum of Art in New York City, was doomed to incur divine wrath. Despite its theme being linked to sacred religious dogmas, the celebrities put a strong emphasis on sexualizing and thus compromising Catholic values, according to critics, many of whom took to Twitter to voice their indignation.

This year’s top fashion event has drawn inspiration from a number of well-known Biblical scenes, such as the Nativity and the Pentecost, as well as other Biblical and religious themes, such as clerical imagery and the everyday life of the clergy.

Many took this frivolous pageantry for religious appropriation and expressed their annoyance using nearly the same wording, usually making use of expletives to make the message stronger:

'My religion I Not your…#MetGala outfit'

Left: My culture is not your goddamn prom dress

Right: My religion is not your goddamm #METGala dress

Center: Just wear whatever you want to wear pic.twitter.com/pYmoDbjCYR

The phrase was notably borrowed from no-less-indignant Twitter comments triggered by a teenager who wore a traditional Chinese dress to her school’s prom. One tweet read: "My culture is NOT your goddamn prom dress," which racked up thousands of likes and was universally retweeted.

The Met Gala story to a great extent echoed the prom dress one, which was obvious from Twitter reactions.

This is the same crowd that jumped all over a teenage girl for wearing a Chinese dress to her prom and saying “Chinese culture is not your prom dress” so I’d like to say “my religion is not your met gala outfit.” pic.twitter.com/vhsf7YOA8m

A girl was shamed for respectfully wearing a qipao to prom, but when the Met Gala sexualizes my religion and turns its sacred symbols into a costume there is no outrage??

Some, having compared the two, say the stories, although they are very much alike, are treated for some reason differently by the same people.

White people: the Catholicism theme for MetGala is so problematic! An insult to my religion!

Also White people: idg why ppl are mad at that white girl who wore that Chinese dress for prom she’s just appreciating the culture!!! HUGE difference!! God ppl are so sensitive nowadays

Conservatives: lol snowflakes…how could you be offended over a Chinese styled PROM DRESS?? Haha it's just fashion cHiLL oUt

Also conservatives: how DARE everyone at the met gala MOCK MY RELIGION?? diSguStiNg

Others, naturally, opted for comparisons with potential Jewish or Muslim reactions, saying that such groups would never tolerate that kind of blasphemy.

*NEW COLUMN*
If the Met Gala was Islam or Jewish-themed, all hell would break loose – so why was it OK for a bunch of flesh-flashing celebrities to disrespect MY religion?https://t.co/aXXTl8P5eE pic.twitter.com/MiLLlJFaSu

Catholic/Christian themed #MetGala?
Why is it ok for a bunch of Hollywood nobodies to disrespect my religion?

Very daring to mock a religion that won't come after them.

Next year, let's do islam, with severed heads, women w/ black eyes, child brides & a side of FGM 4 the girls. pic.twitter.com/GR45C0VYOV

There were those, however, who laughed it all off, or, alternatively, chose to make non-religious comments:

Wearing my religion at the #MetGala pic.twitter.com/rwe0BvJBRs

My religion is not your Met Gala costume pic.twitter.com/QOF8qXbb0E

The Metropolitan Museum and the Vatican reportedly collaborated for over a year to select as many as 40 religious articles as well as Christian art objects for the red carpet display; event curator Andrew Bolton had even reportedly been granted access to the secret chambers where nuns look after papal outfits.

In essence, it is not the only time the event has been blasted for its profanity or misinterpretation of cultural values. Three years ago, the show’s theme was "China: Through the Looking Glass." On that occasion, some were accused of sexualizing traditional Chinese attire, while some donned kimonos, despite the traditional garments being Japanese. Ultimately, the event was highly-appraised after it had been reiterated that the organizers focused not on Chinese fashion per se, but rather the Asian country’s influence on the West.