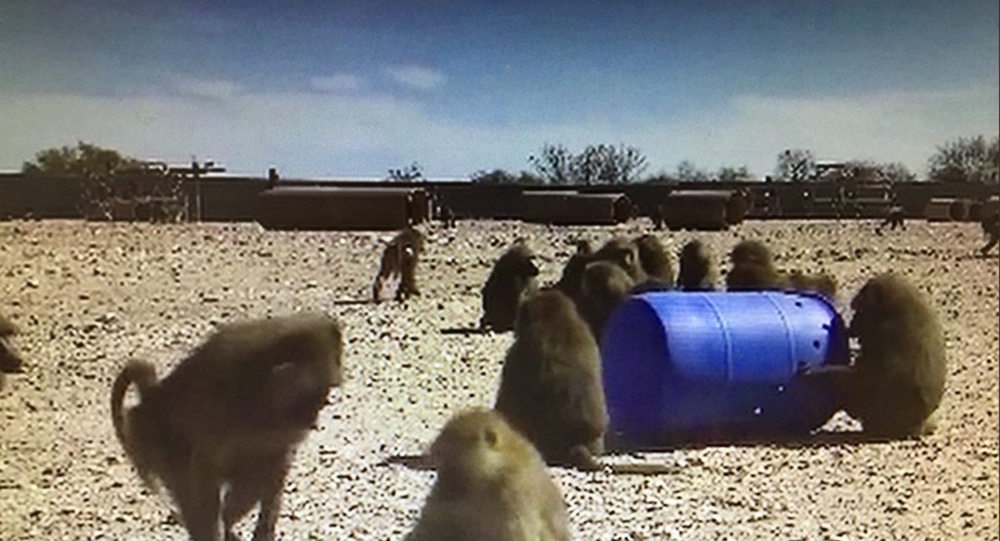 Texas Biomedical Research Institute officials are considering modifying their enclosures after four research baboons propped a 55-gallon barrel against the walls of the center’s open-air enclosure on Saturday and used it to leap over the fence to freedom.

Three baboons successfully escaped the research center. The fourth baboon, who was considering the getaway, eventually decided against it and returned to its pen. Within half an hour, though, all three baboons were recaptured, according to a Tuesday press release by the institute.

"The actions of the animal care and capture team taken this weekend is just one example of the strong training and preparedness of animal care workers in biomedical research," said John Bernal, a veterinarian at the Southwest National Primate Research Center, whose team helped recapture the baboons

"Our animal capture team and the entire animal care team acted diligently and followed protocol to locate, secure and account for the baboons," he added.

All of the baboons were safely returned according to a statement. https://t.co/sA148VbSDd pic.twitter.com/pPBW4V5ZIu

"The animal care team held two of the three baboons to the tree line while members of the animal capture team followed one baboon along the street and used verbal and hand signaling commands to corral the baboon to the tree line for its safety and efficient capture," Bernal explained.

"Our team was ensuring the baboon was not hurt by traffic on Military Drive," Bernal expressed.

According to officials, the barrel was placed in the enclosure in the first place to act as an enrichment tool to allow baboons to carry out typical foraging behavior. The staff has since removed the barrel from the enclosure.

"We have been caring for research baboons for more than 50 years. We have nearly 1,100 baboons on the property that date back eight generations. Baboons, as with all our animals, are critical to biomedical research. Baboons in particular have played an important role in the discovery of life-saving drugs, therapies and vaccines and have led to greater understanding of chronic diseases like heart disease, diabetes, obesity, osteoporosis and so much more that impact the lives of millions of people."

The Texas Biomedical Research Institute has more than 2,500 animals on its premises.