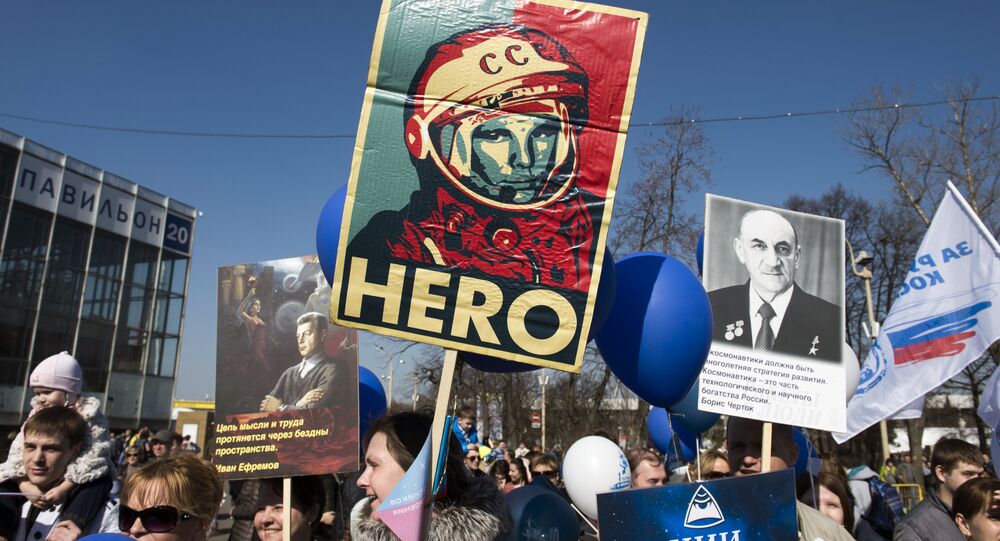 Russia is celebrating Cosmonautics Day on April 12, established in 1962 to commemorate the first manned space flight.

© Sputnik / Roscosmos
Russia to Launch Robot Assistant to ISS in 2020 – Roscosmos
MOSCOW (Sputnik) – On the same day, the world is celebrating the International Day of Human Space Flight.

On April 12, 1961, a booster rocket took into orbit the Vostok spacecraft with the first cosmonaut on board — Soviet citizen Yuri Gagarin.

Having travelled around the Earth once, the reentry module landed on the territory of the Soviet Union. At an altitude of several miles from the surface of the Earth, Gagarin ejected with a parachute and landed on a field near the Volga River outside the village of Smelovka in Russia's Saratov Region, at 10:55 a.m. Moscow time. The flight lasted 108 minutes. Sergei Korolev, Anatoly Kirillov and Leonid Voskresensky controlled the world's first manned spacecraft flight.

This historic event paved the way for space exploration for the benefit of humankind. New opportunities for that opened up in 2000, when the International Space Station (ISS), which is a joint international project involving 15 countries, welcomed its first crew.

Two mission control centers, one in the town of Korolev outside Moscow and the other in Houston, Texas, control its flight around the clock.

Over time, the ISS has become a vast near-Earth laboratory. Over 500 people from nearly 40 countries have been in the outer space since Gagarin’s flight.

In November 1968, the 61st General Conference of the Federation Aeronautique Internationale (FAI), known as the World Air Sports Federation, adopted a decision to celebrate World Aviation and Cosmonautics Day on April 12. Making this day a holiday was confirmed by the FAI Council decision of April 30, 1969 upon the proposal of the USSR Aviation Sports Federation.

In Russia, Cosmonautics Day was established as a commemorative date by the Federal Law On the Days of Military Glory and the Commemorative Dates dated March 13, 1995.

On Cosmonautics Day, Russia celebrates designers, researchers, engineers, workers and cosmonauts — everyone who works in the space industry, tests space equipment, monitors control panels at the Mission Control Center and the Command Measuring Complex, and receives, processes and stores the research space documentation that comes from spacecraft and space stations.

On April 7, 2011, upon Russia's initiative, the UN General Assembly (UNGA) proclaimed April 12 the International Day of Human Space Flight on the occasion of the 50th anniversary of the first space flight by Gagarin. The resolution was co-authored by over 60 UN member states.

The UNGA expressed its deep belief in the common interest of humankind in promoting the exploration and use of the outer space for peaceful purposes, scaling up these activities and continuing efforts to provide access to resulting benefits for all states.

The purpose of Yuri’s Night is to raise public interest in space exploration and inspire younger generations to explore the outer space.

In 2014, over 200 events were held internationally as part of Yuri's Night.

Russia Starts Recruiting Team of Cosmonauts for Flights to Moon