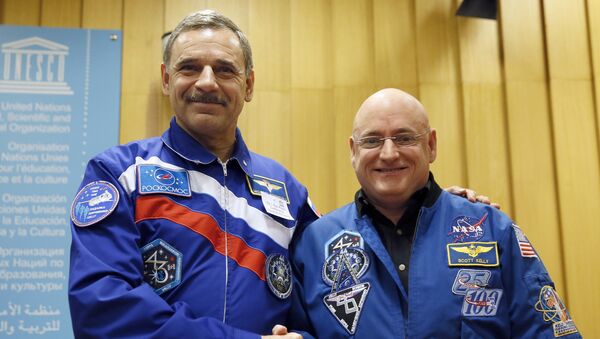 © AFP 2023 / PATRICK KOVARIK
Subscribe
International
India
Africa
The US nonprofit organization Space Foundation has awarded its 2017 Space Achievement Award to Russian cosmonaut Mikhail Kornienko and NASA astronaut Scott Kelly for their groundbreaking almost a year-long mission on board the International Space Station (ISS) during the opening ceremony of the 33rd Space Symposium in Colorado Springs.

Russia
Legendary Cosmonaut Tereshkova Maintains Quality of Russian Space Missions
COLORADO SPRINGS (Sputnik) – Kelly and Kornienko spent 340 days at the ISS — the longest space mission ever recorded — while Sergei Volkov was there for around six months.

During the mission, the station crew conducted almost 400 investigations to advance NASA’s mission, according to NASA.

Kelly and Kornienko particularly conducted research into how the human body adjusts to weightlessness, isolation, radiation and the stress of long-duration spaceflight, the knowledge of which are expected to guide future missions to deep space destinations.

Neither Kornienko nor Kelly could participate in the ceremony, and the award was accepted Monday by Roscosmos Deputy Director General for International Cooperation Sergey Savelyev and NASA Acting Administrator Robert Lightfoot respectively. Both award recipients, however, sent a video message.

Kornienko and Kelly thanked everyone who participated in the mission, and the Space Foundation for the recognition of their work.

"I am sure that the results of our one-year mission will be a breakthrough on the way of deep space exploration," Kornienko said.

"Clearly, I was a guy who was in space for almost a year but really this is about the hard work of thousands of individuals around the world who've made this mission happen… I am really accepting this on their behalf," Kelly said. "Unfortunately, I can't be there in person but I am there in spirit, I am thinking about you, guys."

Kornienko and Kelly were replaced by Russia’s Aleksey Ovchinin and Oleg Skripochka, and US’ Jeffrey Williams who take off aboard the Soyuz TMA-20M on March 19, 2016.

The annually presented Space Foundation's Space Achievement Award recognizes individuals or organizations for space achievement, breakthrough space technology or program representing critical milestones in the evolution of space exploration and development, according to the website.

The Space Foundation, located in Colorado Springs, Colorado, is one of the leading organizations in space awareness activities and major industry events.