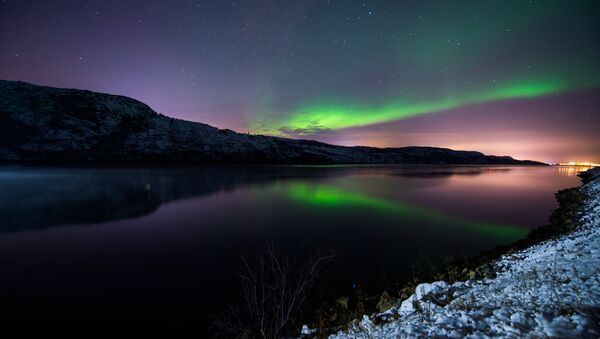 © AFP 2022 / JONATHAN NACKSTRAND
Subscribe
How’s the view from your balcony?

French astronaut Thomas Pesquet has taken fabulous photos of the aurora borealis — the breathtaking seafoam green lights hugging the curvature of the Earth — from the International Space Station (ISS).

The view at night recently has been simply magnificent: few clouds, intense #aurora. I can’t look away from the windows pic.twitter.com/ZL6KRMFYMM

​Pesquet is the only Frenchman aboard the ISS during the ongoing Expedition 50, along with Americans Robert Kimbrough (the mission commander) and Peggy Whitson, and Russians Sergey Rhyzhikov, Andrei Borisenko and Oleg Novitsky.

Hard to imagine the physics behind #aurora: particles bombarding our atmosphere light up in a spectacle like no other! pic.twitter.com/3gzkPtJo1F

​The 39-year-old is in the midst of his maiden spaceflight, and is the first Frenchman to be part of an ISS expedition since 2008. Pesquet is also slated to also take part in Expedition 51, to begin on April 10.

File under desktop #wallpapers: the blue gradients of a sunrise

​Pesquet is also known for being a bit of a shutterbug, often posting photos he's taken of his one-of-a-kind view of Earth. His favorite subject of photography is his native France. He has been on two spacewalks thus far, once in January and once in March. For his January trip, Pesquet attached a camera to his chest so he could give a first-person view of an ISS spacewalk.

​"What struck me the most was that our planet shines! It is not something we are aware of, but due to the reflection of the sun on the clouds and blue oceans, Earth is phosphorescent. It is illuminated and absolutely sublime," he wrote in his first blog post shortly after he arrived at the ISS in November for Expedition 50.

Our Soyuz in original lighting conditions: robotics operations were underway outside the @Space_Station, so lights were on. A rare sight! pic.twitter.com/9jZmhySvyx

​"And all of a sudden you feel very small. Besides cities at night there are not many signs of human life. Amazingly, it is the immensity of nature and oceans that dominates our planet."

The island of #Hawaii and its volcanoes Mauna Kea, Mauna Loa, and the recently active Kīlauea https://t.co/Ei8DbEURp9 pic.twitter.com/B9Fefml348

At the time of this writing, Pesquet's most recent photos were of the Island of Hawai'i.