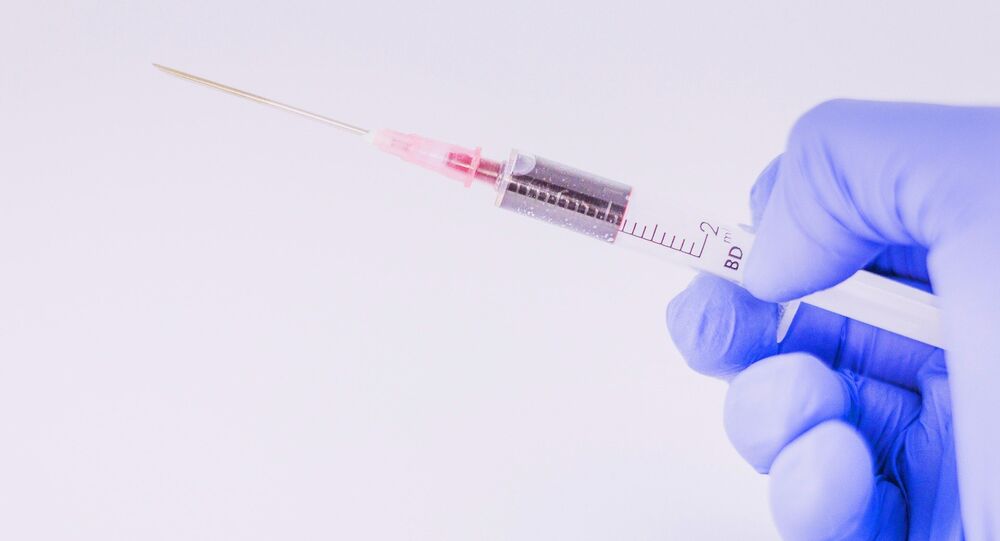 In the 1970-80s, thousands of patients in the UK were infected by contaminated hemoplasma imported from the US and containing HIV and Hepatitis C viruses. One of the victims Andy Evans told Sputnik that "the US knew there was an infectious agent in the blood and the UK purchased it despite the warnings."

With World AIDS Day approaching on December 1, the focus is back on prevention, while health clinicians are working hard to make a difference.

Andy Evans is a hemophiliac and his condition impairs the body's ability to make blood clots, a process needed to stop bleeding. This causes people to bleed longer after an injury; as a result they lose a vast amount of blood and often have to be treated with intravenous infusion of factor concentrate to replace what has been lost.

"I was five years old when I was infected with HIV; my parents told me when I was 13. My Mother drove me to the country side, pulled up and said I had AIDS," Andy Evans told Sputnik.

​During the 1970s and 1980s the UK was importing hemoplasma from the US, where an AIDS epidemic had started. The blood that came from the US was infected with HIV and Hepatitis C.

The incident became known as the 'Tainted Blood' story, where big medical companies made huge amounts of money by shipping infected products "through a back door system."

"What we found out was that people who commissioned buying these products made a lot of money. However, in the US they would keep the uninfected product and send the UK the infected batch. We have since found out that the US knew there was an infectious agent in the blood and the UK purchased it despite the warnings. Around 4,500 people were infected with hepatitis C and about 1,200 became infected with HIV — I was one of them," Andy told Sputnik.

Andy started heavy medication as a teenager to control his condition and his zeal for life and desire to keep going despite his condition never diminished.

"I was taken aback when I first found out, and being a teenager I felt invincible. I said to my mum, 'okay, well that's fine, I can become a scientist or a doctor and find a cure.' But it wasn't until later that the reality set in," Andy told Sputnik.

Andy is now in his forties and has survived, when so many others sadly didn't make it. However, he is aware that there is still a stigma around the condition and compares it to how people who suffered from leprosy may have felt. The stigma exists, even for himself who had no control over the situation.

Andy has found strength in his campaign work for justice, but he says the real anchor in his life has come from his family.

"My family is my rock for me, and they help me to make the decisions that I had to make to stay alive. I have a family, a wife and step daughter and two kids of my own which keep me going," Andy told Sputnik.

Andy and others have been fighting for a public enquiry, which was first led by Lord David Owen, Labour health minister from 1974 to 1976, who alleged that the maladministration by his former department contributed to the scandal in which thousands of patients became infected by contaminated blood products in the 1970s and 80s.

"We are trying to get another public enquiry, but things are being covered up. I think now we have come this far down the line the only hope would be to offer us a decent financial support system that recognizes what has been done to us," Andy told Sputnik.

Despite his condition, Andy is adamant that this does not define him. A vibrant family man who spends time with the people he loves and is currently involved in amateur dramatics, he is aware that living is far more precious and is grateful that he has made it this far.

​"People think that HIV is a chronic condition, that can be treated with pills, like diabetes, and that's wrong, it's still a killer and prevention is key," Andy told Sputnik.

Abena Akom a sex health nurse from London, shares Andy's view, that prevention is the only cure for HIV.

With figures just released showing that one in seven people in Europe still do not know they have HIV, educating people on prevention is of vital importance for Ms. Akom and so many other nurses working hard to see a world where HIV does not exist.

Did you know 1 in 7people with HIV in EU unaware they have virus? #hiv https://t.co/TrqpF14baM

​"I am a Christian first and a nurse second. This is my ministry, I am passionate about health in general, I have been working as a nurse for eight years and in sexual health for over five years, I love what I do, its very rewarding and its important."

"HIV is rising and it's a real thing, I think we need to stop people from dying, we need to educate people and prevent deaths."

At a time when the National Health Service (NHS) is under severe pressure, facing financial cuts, staff shortages and bleak forecasts from analysts, Ms. Akom is passionate about the work she is doing to help the people who need it most.

Ms. Akom will be visiting Uganda next year where she will be continuing her work of HIV prevention and education work.

For Andy, the journey he has made from when he was first told about his diagnosis has been a long one. Fighting battles of stigma and ill health have made him stronger.

On November 24 the British MPs took part in a House of Commons debate on reform of the support arrangements for people affected by contaminated blood and blood product, which could signify change for current support systems offered to patients.