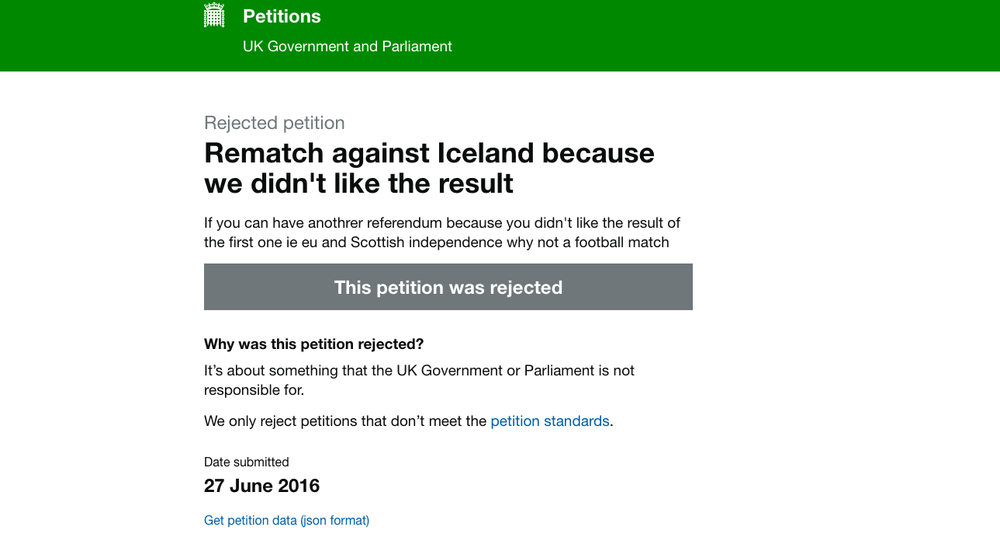 Petitions seem to be all the rage in the UK at the moment following calls to hold a second referendum on EU membership. The craze was extended after England’s shock loss to Iceland in the European football championships, with Sputnik taking a look at some of the most bizarre online petitions.

While the UK government's online petitions initiative was initially designed to facilitate greater public debate about important issues, it seems to have backfired on numerous occasions.

The British public's shock decision to support a Brexit in last week's EU referendum immediately triggered an online petition calling for another vote to be held, with around 4 million signing the petition so far.

A rather mischievous question… what happens if over 17 million people sign the petition for a second referendum? https://t.co/O9GhhL3M6R

​While a second vote based on the petition is thought to be highly unlikely, the government will have to respond to the online call as it generated more than 10,000 signatures.

The call for a second EU referendum only seemed to spur on the UK's petition enthusiasts, with a tongue-in-cheek petition launched, calling for England to replay their European football championship second round match against Iceland, after suffering a shock 2-1 loss to the Scandinavians.

​The petition was rejected however, with an official government statement emailed to Sputnik, saying the petition was "offensive, nonsense, a joke, or an advert."

However, that didn't stop many taking to social media to lament the second Brexit from Europe within a week.

Perhaps one of the greatest demonstrations of modern democracy, the saga highlighted the perils of online polls, with the British public voting overwhelmingly to name a government research ship "Boaty McBoatface."

I think the point where it all went wrong for England was when the govt.ignored the people will & didn't call that ship #BoatyMcBoatface.⛵️

​Despite the strong public support for the name, the government rejected the poll and opted to label the ship "Sir David Attenborough," after the iconic environmental broadcaster.

​Not to be outdone though, punters launched a petition calling for the man himself, Sir David, to change his name to "Boaty McBoatface" — all in the name of "democracy and humor."

Not to be outdone, dinosaur enthusiasts in the US launched a petition calling on the government to "convert at least one (1) National Park into a dinosaur clone park."

Petitions with more signatures than Pulis Out Petition:
— create a hot dog emoji
— open a real Jurassic Park
— all fireworks to be silent

​Calling for "a safe, tourist-friendly habitat for reanimated dinosaurs," the petition argued that a Jurassic Park style set-up would be perfect.

"Nothing could go wrong. No unforeseen consequences. Just educational fun for the Velociraptor, Tyrannosaurus Rex, and small tourist children."