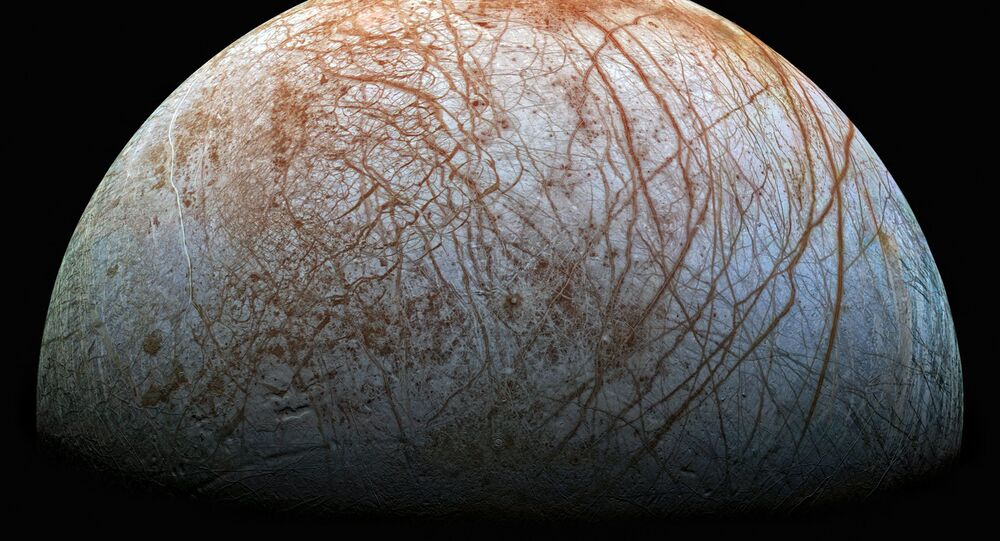 The reddish-brown lines that crisscross the surface of Jupiter's moon Europa may be sea salt from an underground ocean, a new study suggests, implying conditions that favor life under its icy crust.

Researchers at NASA's Jet Propulsion Lab reported Tuesday that the mysterious streaks on the icy moon's surface are likely sea salt discolored by exposure to radiation. They arrived at that hypothesis by putting everyday salt in a vacuum chamber chilled to minus 270 degrees Fahrenheit, then blasted the samples with electrons.

"We call it our 'Europa in a can,'" study lead author Kevin Hand said in a statement. "The lab setup mimics conditions on Europa's surface in terms of temperature, pressure and radiation exposure. The spectra of these materials can then be compared to those collected by spacecraft and telescopes."

Researchers also found that a few dozen hours of radiation treatment – the equivalent of perhaps 100 years of Europa-level exposure – turned the salt from white to a yellow-brown color similar to that of the Europa lines, which trace geological fractures on the moon's surface.

Further, the salt samples turned darker the longer they were exposed to the electron beam, suggesting that researchers might be able to estimate the ages of some Europa features based on their color.

The presence of sea salt on Europa's surface suggests the ocean is interacting with its rocky seafloor, scientists said. That could reinforce the notion that the icy moon has the necessary ingredients to support life.

© AP Photo / NASA/JPL-Caltech
A "Europa-in-a-can" setup at a NASA lab mimics conditions of temperature, near vacuum and heavy radiation on the surface of Jupiter's icy moon.

"We have many questions about Europa, the most important and most difficult to answer being, Is there life?" Curt Niebur, of NASA Headquarters in Washington, said in the same statement.

"Research like this is important because it focuses on questions we can definitively answer, like whether or not Europa is inhabitable," he added. "Once we have those answers, we can tackle the bigger question about life in the ocean beneath Europa's ice shell."

NASA has proposed a flyby mission of Europa that would launch in the 2020s. While not yet finalized, the mission would most likely send a spacecraft into Jupiter’s orbit for three to four years. There also has been recent talk of dropping a lander on the surface.