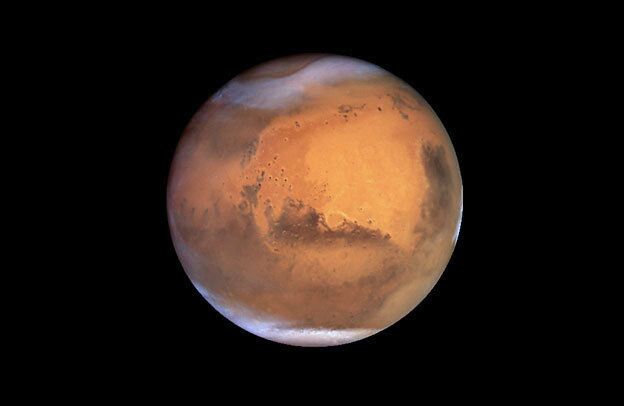 The $850 million robotic geophysicist InSight lander touched down on Mars in November 2018 on a mission designed to help scientists better understand the interior of the Red Planet, as its seismometer was to feel for seismic waves, or 'marsquakes'.

NASA’s Insight lander on Mars has detected intriguing rumblings emanating from the interior of the Red Planet, prompting scientists to suggest a flurry of theories explaining the seismic events.

The seismometer of the stationary probe designed to study the interior of the Red Planet detected the two new “marsquakes” on 7 March and 18 March, both in a region called Cerberus Fossae where two previous similar rumblings were observed by the mission. This would seem to suggest that the area is particularly seismically active.

Interestingly, the new quakes appear to match the earlier registered ones “geophysically”.

"Over the course of the mission, we've seen two different types of marsquakes: one that is more 'moon-like' and the other, more 'Earth-like,'" Taichi Kawamura, a seismologist at France's Institut de Physique du Globe de Paris, said in a statement, adding:

"Interestingly … all four of these larger quakes, which come from Cerberus Fossae, are 'Earth-like.'"

After several months of preparation since touching down on Mars in November 2018 the mission has identified over 500 so-called "marsquakes" in its first Martian year, which lasts about 687 Earth days.

Interesting fact: Since its landing in 2018, NASA's InSight robotic lander has detected over 500 'marsquakes' on the Red Planet —with two of the strongest yet coming in just last month..

​Strong winds have thrown a spanner into the works of late, preventing scientists from homing in on small rumbles in the Red Planet. Now that things seem to have brightened up, a favourable spell of weather in March allowed mission personnel to detected two quakes stronger than magnitude 3.0.

"It's wonderful to once again observe marsquakes after a long period of recording wind noise. One Martian year on, we are now much faster at characterising seismic activity on the Red Planet," said John Clinton, a seismologist who leads InSight's Marsquake Service at ETH Zurich, in a statement.

NASA scientists are now focused on determining what may be causing the rumblings.

One suggestion is that it is a sudden release of energy from the planet's interior, but if that is the case, the nature of that release remains unknown. As they puzzle over the matter, scientists are looking to improve marsquake observations during the next Mars year.

The probe’s seismometer, called the Seismic Experiment for Interior Structure (SEIS), is a sensitive instrument that is covered by a dome-shaped shield to block it from wind and prevent it from freezing.

However, even with the worst of the dust-storm season over, winds can cause enough vibration to obscure the seismic signals scientist are trying to detect. Furthermore, temperature fluctuations between day and night on Mars may be creating "popping sounds and spikes" in the seismometer's data, according to the NASA team.

© NASA . NASA/JPL-Caltech
This is NASA InSight's first selfie on Mars. It displays the lander's solar panels and deck. On top of the deck are its science instruments, weather sensor booms and UHF antenna. The selfie was taken on Dec. 6, 2018

They are currently trying to insulate the sensitive cable connecting the instrument to the main lander by using the lander's robotic arm to scoop Martian soil onto the cable.

NASA’s InSight lander used a scoop on its robotic arm to begin trickling soil over the cable connecting its seismometer to the spacecraft on March 14,2021,the 816th Martian day, or sol of the mission.Scientists hope insulating it from the wind will make it easier to detect quakes pic.twitter.com/rbNwD0pIt1

​The ultimate goal of the next phase of the mission, which has been extended by two years to December 2022, is to bury the seismic tether completely.

Another challenge has been the dust residue from the storms that has shrouded the lander’s solar panels, which power it.

​Furthermore, the Red Planet is drifting away from the sun along its elliptical orbit, reducing power production.

As the orbit of Mars begins to carry it back toward the Sun in July, the power shortage strain on InSight's systems should be alleviated.

InSight Lander is a stationary probe designed to study the interior of the Red Planet, unlike NASA's Perseverance, a car-sized Mars rover designed to explore the crater Jezero , or Opportunity, Spirit and Curiosity rovers.

InSight was launched toward Mars on 5 May 2018 from Vandenberg Air Force Base in California, on an Atlas V vehicle from United Launch Alliance.

​The mission landed successfully on 26 November 2018 at the Martian Elysium Planitia, an equatorial zone just south of an ancient volcanic area. Originally slated to send back data about the Red Planet's interior for about 1 Mars year, (a little more than two Earth years), NASA’s InSight mission was extended through December 2022.