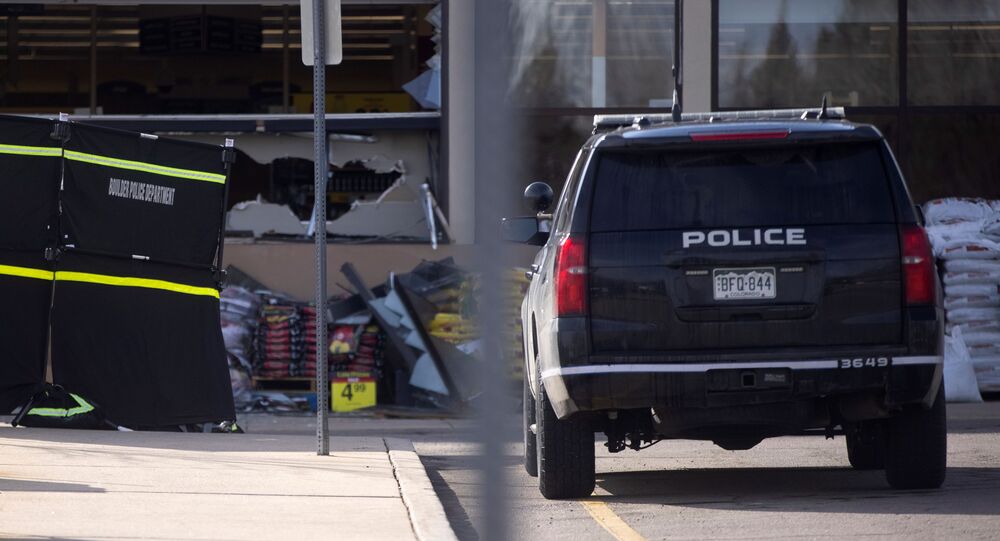 To date, the US has documented a total of seven mass shootings in 2021, with the most recent incident claiming the lives of 10 individuals in Colorado. The deadly shooting on Monday came less than a week after a gunman killed eight people in a series of attacks on massage parlors in Georgia.

YouTube has declared it will not be removing a livestreamed video that gave detailed insight into the shooting scene that unfolded at a King Soopers supermarket in Boulder, Colorado, it was revealed on Tuesday.

The video sharing company has indicated that rather than deleting the graphic video content, it will be adding a warning label, and placing restrictions that would make the video available to only users over the age of 18.

"Following yesterday’s tragic shooting, bystander videos of the incident were detected by our teams," Elena Hernandez, a spokesperson for YouTube, told The Hill in a statement. "Violent content intended to shock or disgust viewers and hate speech are not allowed on YouTube, and as a result we have removed a number of videos for violating our policies."

However, when it came to the video footage recorded and shared on the platform by self-avowed citizen journalist Dean Schiller, different standards were tapped.

"We do allow certain violent or graphic content with sufficient news or documentary context, and so we’ve applied an age restriction to this particular content," Hernandez explained, before noting the company “will continue to monitor this rapidly changing situation.”

The citizen journalist livestreamed the events on his YouTube channel ZFG Videography, and managed to amass roughly 30,000 viewers while live. As of Tuesday afternoon, the video has gained over 625,000 views.

At present, the warning placed on the video reads: “The following content has been identified by the YouTube community as inappropriate or offensive to some audiences.” In order to view the recording, users are required to select an acknowledgement statement before proceeding.

The graphic video begins with Schiller running toward the supermarket, as he is explaining to viewers that he heard gunshots and saw an individual lying face down at the entrance of the establishment. At least three bodies are seen in the opening seconds of Schiller’s stream, and two gunshots are heard before he decides to place some distance between himself and the building.

The three-hour-long video, which also included footage of a man believed to be the shooter being escorted by police, saw Schiller repeatedly refusing to leave the crime scene and arguing with law enforcement officials. At one point, Schiller is heard telling officers that he’s “a journalist, don’t yell at me, I’m watching you, I’ll do what I want.”

After eventually being successfully booted from the scene, Schiller opted to give several interviews to media outlets before then deciding to drive to another suspected shooting scene in the area that was blocked off by authorities. The livestream only ended after Schiller’s phone battery began to run out.

Schiller’s controversial recording has been repeatedly blasted online by critics. Many have called Schiller out for his decision to air unsubstantiated theories regarding the shooting, reveal police tactics that the shooter could have used to their advantage, and for prioritizing filming the scene over helping victims.

Incidentally, this is not the first time that Schiller has gone toe-to-toe with local law enforcement.

The Colorado Springs Gazette reported earlier that police have been well aware of Schiller, especially after he and fellow citizen journalist Jedon Kerr filed a lawsuit against the City of Boulder in 2019 over their arrest and temporary detention for filming inside and around the Boulder County Jail.

Boulder police announced late Monday that the shooting spree killed 10 individuals, including an officer with the Boulder Police Department who was among the first officials to respond to the scene. The shooting suspect has been identified as a 21-year-old resident of Boulder, and has been charged with 10 counts of first-degree murder.

Police believe an investigation into the shooting will take no longer than 5 days.