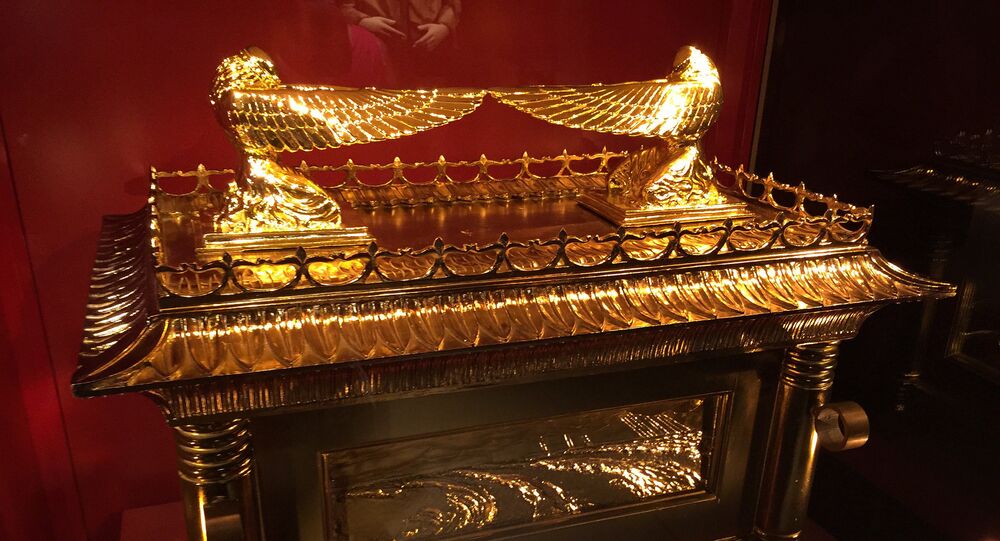 Has the Biblical Home of the Ark of the Covenant Been Finally Discovered?

Finding the Ark of the Covenant – described in Biblical lore as a gold-covered wooden chest containing the two stone tablets inscribed with the Ten Commandments handed from God to Moses – has long inspired treasure hunters and historians alike. It is believed to have disappeared around 587 BC when Jerusalem was destroyed by invading Babylonians.

Archaeologists from Tel Aviv University claim to have found a stone slab that recalls the one on which the Biblical Ark of the Covenant once sat.

The Ark, described in the First Book of Samuel, is said to have contained two stone tablets of the Ten Commandments, which were handed from God to Moses on Mount Sinai.

The team, led by Dr. Zvi Lederman and his colleague, Prof. Shlomo Bunimovitz, made the discovery in an ancient temple not far from Jerusalem, in Beth Shemesh, reports Haaretz.

The 3,100-year-old holy site had been under excavation since 2012, but it was only in the summer of 2018 that archaeologists unearthed a massive stone slab resting horizontally on two smaller rocks, which they initially believed to be a dolmen – such as those ritual standing stones that can be found around the world.

“At the beginning we thought it was a massebah that had fallen over… But soon we realized that it was meant to be a table,” said Lederman.

According to the researcher, analysis of the “table” suggests it might be the “large stone” on which the Ark of the Covenant rested when it was brought to Beth Shemesh after being recovered from the Philistines.

According to the Bible, after the Israelites settled in the Promised Land, the ark was placed in Shiloh, north of Jerusalem, but was later captured by the Philistines.

God punished the Philistines, afflicting them with illness and plagues until their leaders returned the holy artefact.

“This would be a rare case in which we can merge the biblical narrative with an archaeological find,” the Haaretz quotes Dr. Zvi Lederman as saying.

The mysterious structure originally discovered by the archaeologists has been dated to the 12th century B.C.E. and is located on a tel – the remains of multiple ancient settlements – just outside present-day Israeli city Beth Shemesh, 20 kilometres west of Jerusalem.

Intriguingly, it stands apart from other residential areas, had sturdier walls, and its shape was a perfect square, each side 8.5 meters long.

The structure, facing east where the sun rises, opened onto a platform commonly used for religious ceremonies.

© AP Photo / Enric Marti
In this Wednesday, Jan. 7, 1998 file photo, the shadow of Mount Sinai stretches across the valley at the foot of the Greek Orthodox Monastery of St. Catherine in the Sinai peninsula some 240 miles southeast of Cairo, Egypt

Inside the supposed temple, archaeologists found two large round concave stones with gutters carved into them, which were possibly used for libations of wine or were perhaps miniature olive presses to produce sacred oil, says Lederman.

The researchers also found remnants of decorated pottery jugs and cups, besides a pile of animal bones – all signs of ritual practices, according to Prof. Shlomo Bunimovitz.

“There is a lot of evidence that this was indeed a temple… It’s very clear that this not a standard domestic space but something special.” the archaeologist says.

‘An Act of Hostility’

At some point in the mid-12th century B.C.E. the building was destroyed; the pottery vessels were smashed to bits.

As the team dug through layers of thick dark substance to uncover what they now believe was a temple, the scientists had a surprise in store for them.

Analysis showed the material shrouding the ritual place was not ash from when it was set on fire, as they had thought, but heaps of animal dung.

“Very shortly after it was destroyed, the entire place was turned into an animal pen… To me this is an act of hostility, an intentional desecration of a holy place,” Lederman is quoted by the publication as saying.

Based on biblical chronology, in the 12th-11th centuries B.C.E. Beth Shemesh was a border town between the Israelites and the Philistines, with the two peoples often clashing.

Archaeologists have identified four distinct villages built one atop another, showing that the place had been conquered, destroyed, and rebuilt many times in the space of 200 years.

Those likely responsible for the desecration were the conquering Philistines, say the researchers, as their closest settlement, Tel Batash, was just seven kilometres from Beth Shemesh.

© AP Photo / Karel Prinsloo
A priest carries what Ethiopian Orthodox Christians believe is a replica of the lost biblical Ark of the Covenant, during the start of the annual Timkat holiday, which celebrates the baptism of Jesus Christ, Friday Jan. 18 , 2002 in the town of Axum, Ethiopia.

Is it possible to prove that the ark, indeed, rested on this particular stone table? Not archaeologically, warns Lederman, conceding that there are several inconsistencies between the biblical story and the find in Beth Shemesh. However, this in no way diminishes the significance of the find, and only adds to the fascination that the Ark of the Covenant has wielded over researchers and treasure hunters alike for generations.

The subject of Biblical lore, it is believed to have disappeared in around 587 BC, when Jerusalem was destroyed by the invading forces of Babylon, and has been sought for centuries.

Theories regarding its possible whereabouts range wildly, from it remaining hidden beneath the Temple Mount in Jerusalem, to being guarded by a tribe in Africa.