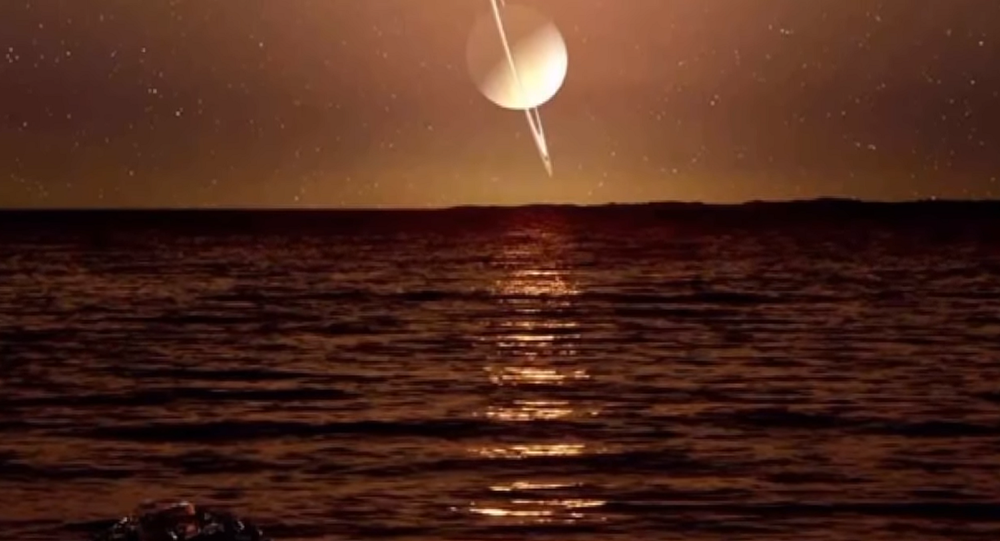 A new theory floated by planetary scientists suggests the iconic liquid methane lakes on Saturn’s moon Titan didn’t just erode away the ground - they formed in craters from nitrogen explosions.

Titan is the only place in the solar system apart from Earth where stable liquid exists on the surface. Of course, Titan, which is larger than the planet Mercury and second only to Jupiter’s Ganymede in moon size in the solar system, is much colder: its average surface temperature is minus 219 degrees Fahrenheit (minus 179C). Since the place is so incredibly cold, it’s not water, but methane and ethane that form clouds, rainstorms and lakes.

Those lakes have been the subject of no shortage of speculation, including that they might harbor life. However, a new theory seeks to upend the existing understanding of how those lakes were formed.

Existing theory speculates the frigid lakes carved holes in the Titanian crust, much like water has carved karst lakes through limestone on Earth, but scientists examining data from NASA’s Cassini spacecraft argued in a paper published in Nature Geosciences on Monday that the great holes now filled with liquid methane were once underground pockets of liquid nitrogen that heated up and exploded, blasting huge craters in the moon.

Before the Cassini spacecraft, launched by the US space agency NASA, took its final plunge into Saturn’s atmosphere in September 2017, the probe collected data on the ringed planet and its many moons during a mission spanning 20 years. Some of the radar data taken of Titan was given new attention by Giuseppe Mitri of Italy's G. d'Annunzio University and his team of scientists, who found that the shape of the methane lakes’ coastlines doesn’t match up with the karst lake explanation.

"The rim goes up, and the karst process works in the opposite way," Mitri said in a Monday statement to NASA. "We were not finding any explanation that fit with a karstic lake basin. In reality, the morphology was more consistent with an explosion crater, where the rim is formed by the ejected material from the crater interior. It's totally a different process."

"These lakes with steep edges, ramparts and raised rims would be a signpost of periods in Titan's history when there was liquid nitrogen on the surface and in the crust," co-author Jonathan Lunine of Cornell University, who also worked on the Cassini program, told NASA. According to the team’s theory, the liquid nitrogen began to heat up inside those pockets, turning to vapor and becoming highly explosive.

On Earth, nitrogen is a key ingredient in nitrates, the basis for most explosives. And this is a place NASA engineers said would be “an awesome place to live?”

Fortunately, NASA’s next mission to the icy world will be a helicopter drone, Sputnik reported. NASA administrator Jim Bridenstine revealed in June that the Dragonfly spacecraft, slated to leave Earth in 2026 and arrive in Saturn’s orbit in 2034, will carry an unmanned aerial vehicle capable of cruising around in the methane clouds.