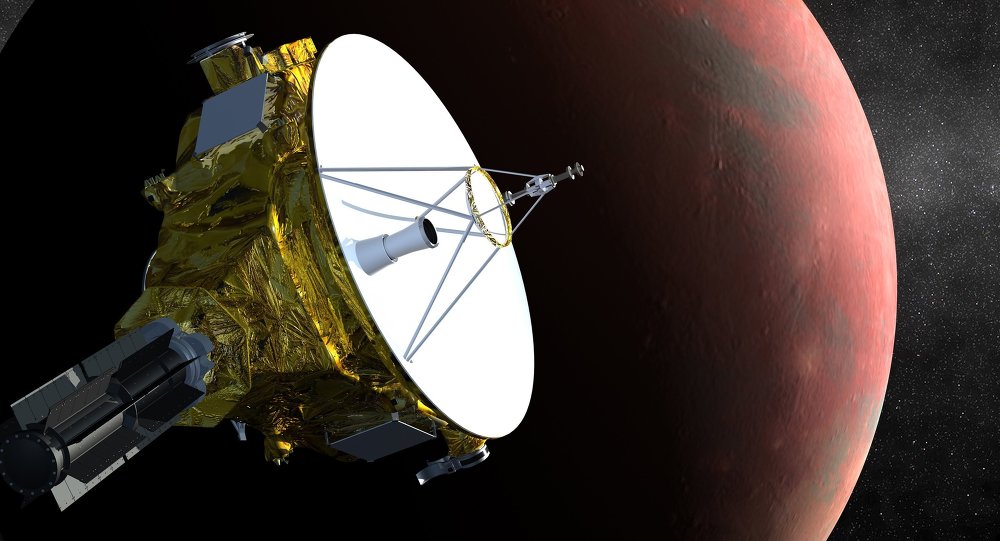 MOSCOW (Sputnik) - US space probe New Horizons flew past 2014 MU69 Ultima Thule asteroid at the very edge of the solar system, making it the farthest from the Earth ever visited by a probe from our planet, NASA said on Tuesday.

"RIGHT NOW, ~1 billion miles past Pluto, @NASANewHorizons is performing the most distant spacecraft flyby ever as it zooms past #UltimaThule, an icy, ancient rock in the Kuiper Belt," NASA wrote on Twitter.

TALLY HO ULTIMA THULE!! An ancient relic of solar system formation, 4+ billion miles away, as dark as dirt, & shining only in the faint sunlight of the Kuiper Belt. Here it is, in a New Horizons imaging sequence. SEE IT MOVE, AGAINST THE STARS? TALLY HO! We'll be there on Monday! pic.twitter.com/EExUpK6wLt

© NASA . NASA handout
NASA Spacecraft Detects Weird Anomaly Days Ahead of Ultima Thule Flyby
Earlier, mission supervisor Alan Stern reported that on the cameras installed on the device, the asteroid will be the same size as the full moon viewed from Earth. In this case, the probe will literally sweep past Ultima Thule at a speed of 32,000 miles per hour (51,000 kilometers per hour or about 14.6 kilometers per second).

Asteroid 2014 MU69 was discovered via the Hubble orbital telescope back in 2014. In March 2018, NASA called it Ultima Thule, which means "The Edge of the World," on the basis of Internet voting. As noted by NASA, until now, researchers know very little about this space body, so they expect to learn more as a result of data obtained during the convergence.

New Horizons, which is considered the fastest ever spacecraft ever sent to space from the Earth, was launched in January 2006. A year later, it passed Jupiter at a record close distance of 2.3 million kilometers, transmitting valuable information about the atmosphere and the magnetosphere of the planet, as well as about its satellites, to the Earth. After that, the device continued the space trip in "sleep mode" to preserve the capabilities of the equipment installed on it.