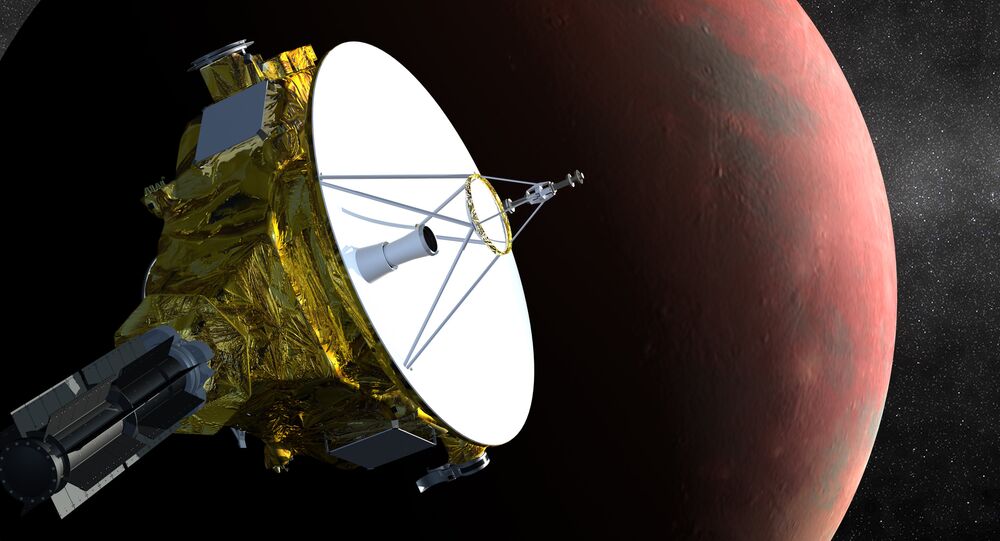 Just after midnight on January 1st will be the first time an object like this has been seen at the edge of the Solar System.

The robotic spacecraft called New Horizons has been travelling through space for the last 13 years. It is most notable for being the first human-made object to ever visit Pluto in the summer of 2015. Yet on New Year’s Day, it will meet another object on the edge of the Solar System — a rock nicknamed Ultima Thule, located 1 billion miles beyond Pluto, the Verge reported.

Courtesy of the US Air Force Space Command
US Aims for Space Supremacy Pose Potential Threats to Russia, China - Ambassador
The rock is about the size of New York City, orbiting in an area of the Solar System known as the Kuiper Belt. This is the region of space beyond the orbit of Neptune comprised of numerous small frozen objects – thought to be leftover remnants from the birth of the Solar System 4.5 billion years ago.

The objects in the Kuiper Belt are extremely cold — a mere 35 degrees Kelvin above absolute zero. Because of their temperature they cannot change internally and externally, keeping them frozen in time over billions of years.

“We’ve never been to anything like this that’s been kept in such a deep freeze so long,” Alan Stern, principal investigator for the New Horizons mission, told The Verge. “Anything so perfectly preserved from the early days of the Solar System.”

Passing by Ultima Thule is going to be an incredibly challenging task as due to its small size and distance, the object is hard to see and track from Earth. The New Horizons team will have only one chance to do a flyby. The spacecraft is currently travelling through space at 32,000 miles per hour so it will be impossible to turn the spacecraft around in case of a mistake.

“We don’t have a second spacecraft coming by a week later. And because it’s a very complex enterprise to do one of these flybys, there are literally hundreds of variables that all have to choreograph perfectly,” Stern said.

© Photo : federalspace.ru
Russian Cosmonaut Dismisses Rumours About ISS Crew, Hole in Soyuz Spaceship
MU69, now nicknamed Ultima Thule, was ideally placed on New Horizons’ path out of the Solar System, as the spacecraft had managed to carry enough fuel to fire its thrusters and reach the object after it had reached Pluto in 2015. It was able to detect and focus on Ultima Thule only by using NASA’s Hubble Space Telescope, as the rock is too small and faint to visualize with telescopes available on Earth.

The scientists who gathered information about the rock described it as “weird” when they observed it passing in front of a background star. This occultation — or momentary eclipse — revealed that Ultima Thule is either shaped like a rubber duck – or it could be two separate rocks orbiting very close to one another. The best pictures won’t be possible until New Horizons is more or less on top of the object, filming it with its onboard cameras.

“This is a dot in the distance until the last minute, and then you snap your fingers, and you go from a point to a world in literally a 48-hour period,” says Stern.

New Horizons must execute a series of pre-planned tasks when it flies by Ultima Thule on January 1st at 12:33AM ET, coming within 2,200 miles of the rock’s surface. The success of the mission will only be known ten hours after the spacecraft starts sending a signal back to Earth, with the first pictures appearing up to 20 months later because of the spacecraft’s low processing power.