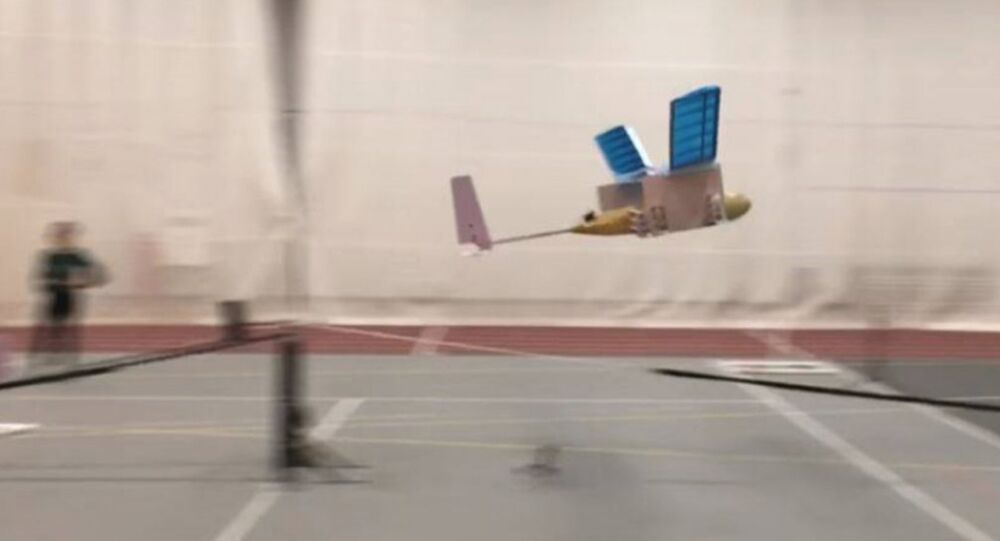 In an era-defining moment, a test aircraft with no moving parts successfully flew for the first time on Wednesday.

© Sputnik / Ruslan Krivobok
First International Science Games Open in Yakutsk
Over a century following the first US flight by the Wright brothers in 1903, a team of researchers at MIT have made history following the successful test of an ‘ion drive' aircraft.

Using ion-drive technology, a simple aircraft made its first flight in an MIT gymnasium flying for just 12 seconds, but the trip was an enormous leap for a new method of flight

The 16-foot wingspan test aircraft made no sound other than the flow of air around its wings as jubilant researchers noted the success of the ground-breaking experiment.

Using no propeller or turbine, the craft is instead powered by electrically supercharged air molecules moving from front to back; a ‘solid-state plane,' according to reports.

"This level of performance suggested that steady-level flight of a fixed-wing unmanned aircraft might be feasible but at the limit of what is technologically possible using current materials and power electronics technology," noted the MIT researchers.

Since no moving parts power an engine that burns fossil fuel, the new tech could revolutionize the fight against greenhouse gas emissions, mitigating some of the worst effects of global warming resulting from human-induced climate change.

Using the science of electroaerodynamics, a Massachusetts Institute of Technology (MIT) research team have now unlocked a new way to power an aircraft, according to the South China Morning Post (SCMP).

The stripped-down airframe flew about 181 feet, traveling at some 11 miles per hour, according to Ars Technica.

"The future of flight shouldn't be things like propellers and turbines," asserted prototype designer Steven Barrett, adding, "It should be more like what you see in Star Trek, with a kind of blue glow and something that silently glides through the air," cited by SCMP.

The simple aircraft is powered using a front-to-back system of parallel electrodes comprised of very thin wire but producing a whopping +20,000 volt-charge at the front. The air surrounding the device quickly becomes supercharged and negatively-charged nitrogen and oxygen ions are forcibly split away.

At the rear of the aircraft, aerofoils calibrated to —20,000 volts draw those ions — moving from positive to negative — and the ion flow drags along air particles, forming the so-called ionic wind which gives the device the necessary lift to fly.

While the tech proving the utility of ionic wind — an idea originally posited by Robert Goddard in 1906 and Konstantin Tsiolkovsky in 1911 — has been around since the 1960s, challenges of efficiency-to-power-output prevented its introduction, until recently.

While the first ion-driven craft has flown just a few tens of meters, the efficiency of the tech is predicted to increase speed and power, soon paving the way for humans to ride in silence aboard something straight out of Star Trek.

© Photo : NASA
Extraterrestrial: What Life on International Space Station is Like
18

"It's clearly very early days: but the team at MIT have done something we never previously knew was possible, in using accelerated ionized gas to propel an aircraft," noted Guy Gratton, an aerospace engineer not involved in the study, cited by SCMP.

The current prototype could be possibly scaled up "a significant amount" according to lead designer Barret, but he warned of limits on propulsion.

"We don't yet know if there is such a limit and we will certainly try to scale up as much as possible," he said, cited by Ars Technica.

"This would be much more efficient than the current situation where you have concentrated engines that generate thrust, which have to fight against a large passive airframe that generates drag," the MIT researcher noted.

A Fusion of Science and Technology: Why State Awards are Given