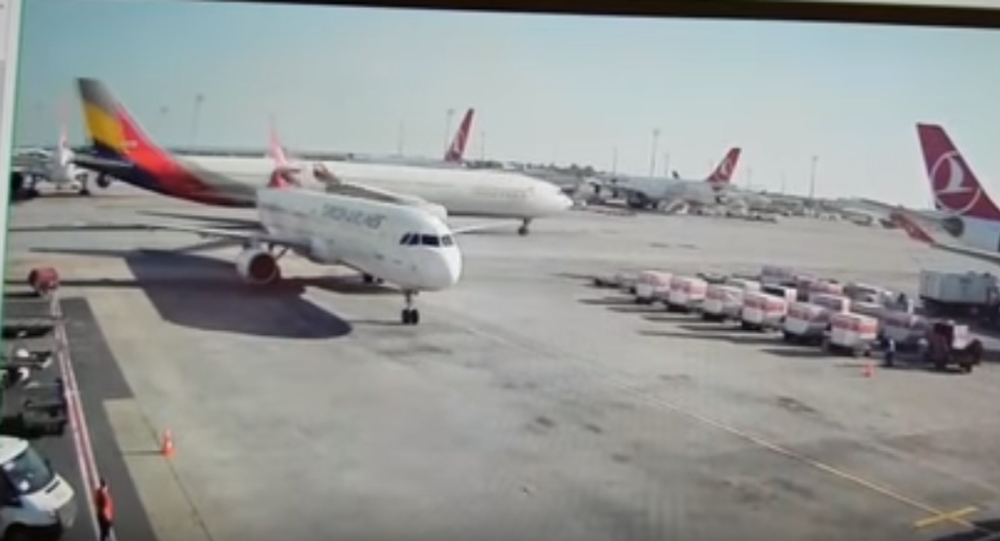 Footage uploaded Sunday to YouTube shows the Asiana A330's right wing crashing into and then severing the Turkish Airlines A321's vertical stabilizer, a key part of the aircraft's tail. The impact of the collision caused the whole A321 to turn. The Asiana aircraft is shown coming to a complete stop shortly after the collision.

​"Turkish Airlines confirms that the Airbus A330 type aircraft of the South Korean airline, Asiana Airlines, hit the tail of Turkish Airlines' Airbus A321 while it was taxiing on Istanbul Atatürk International Airport in yesterday. There were no passengers and crew injured due to the incident; it just caused physical damage on both aircraft," according to a Turkish Airlines spokesperson, Air Transport World reported.

The Asiana A330 was getting ready to depart for Seoul, South Korea, while the Turkish Airlines flight had just landed in Istanbul after flying from Northern Cyprus' Ercan International Airport.

After the incident, the Seoul-bound flight was canceled and passengers were provided accommodation at nearby hotels.

The incident is currently being investigated by Turkish and South Korean authorities to determine its cause.

In 2011, a similar incident occurred at New York's Kennedy Airport when an Air France A380 superjumbo jet clipped the tail of a small commuter plane operated by Delta, causing the commuter plane to spin violently.

Plane Lands in Moscow Airport After Losing Part of Its Fuselage