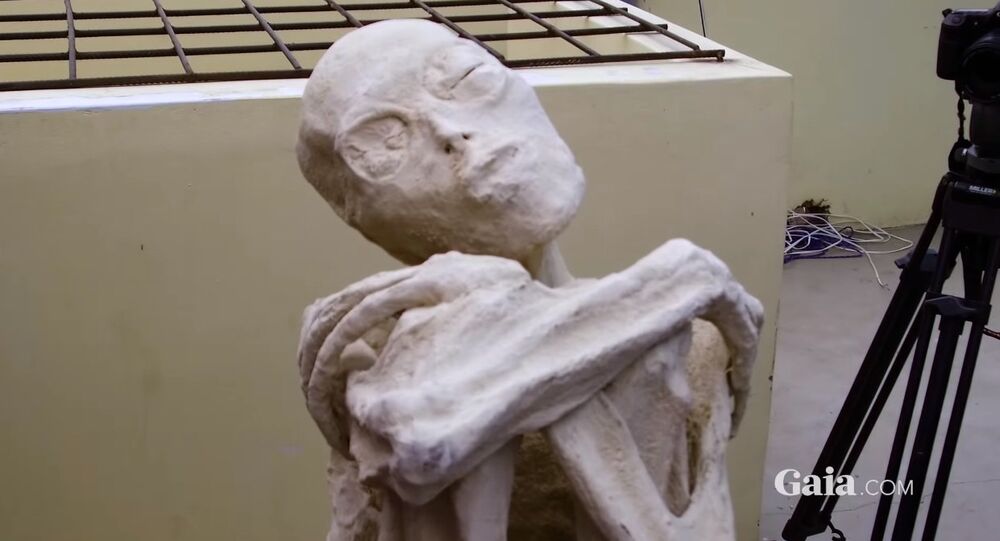 A team of St. Petersburg geneticists have brought tissue samples of the alien creature with an elongated skull and only three fingers and toes, to Russia to try to break its genome.

The mysterious mummy was found in a tomb near the Nazca Lines in southern Peru in early-2017.

According to preliminary analysis, the mummy, named Maria, found in a tomb near the Nazca Lines in southern Peru, dates back to about 5th century A.D., about a millennium before the discovery of America.

The analysis also found that Maria “is a humanoid being, meaning that she also has 23 chromosomes like us.”

© CC0 / Pixabay
'Crucial Piece of the Puzzle': Egyptian Mummies Genome Value for Genetics
“Right now we are making a detailed analysis to see if the shape of the position of all the chromosomes, of all the amino acids, coincides with ours,” Russian National Research University professor Konstantin Korotkov, said.

The mummy’s rib structure is very different from that of a human being. Keel-shaped in its upper part, the rib cage consists of a handful of semicircular ribs. Its unusual shape has helped scientists carefully study the mummy’s internal organs.

The scientists have even managed to find out that the white powder the alien civilization used to mummify their dead is cadmium chloride – a chemical whose antibacterial effect has kept Maria preserved.

All set to break the mysterious creature’s DNA code, the Russian  scientists plan to work closely with their Peruvian colleagues. They even want to seek permission to bring the mummy to St. Petersburg.

Besides Maria, the St. Petersburg scientists have also been analyzing the genome of another mummy found in Peru. While Maria was an adult woman, the other one – Vavita – was nine months old when she died. The researchers think that the two could have been mother and child.

Konstantin Korotkov said that his Peruvian colleagues had shown him four more mummies, 70 centimeters each, whom they called “Verdants.” For some strange reason, one carbon dating analysis made in the US said that they were 6,500 years old, while another said they died about 4,000 years ago.

© CC0
Study Reveals How Mankind Would React to Contact With Space Aliens
“Each of the little mummies has two arms, two legs, a head, a pair of eyes and a mouth. Tomographic scans reveal their skeletons. The tissue has biological nature and their chemical composition indicates that they are humans. Their DNA features 23 pairs of chromosomes, just like we have. All the four of them are males, each with a Y-chromosome. They appear human but they are not. Their anatomic structure is different,” Korotkov explained.

He added that the 70cm males have three fingers and their  skulls are elongated at the back of the head. The nasal cavity is missing and superciliary arches are not pronounced.

“Most surprisingly, the mouth cavities are there but the lower jaws are not flexible and present a single whole with the rest of the skull.

When asked who these “little men” really were, Korotkov said it was hard to tell.

“They could be extraterrestrials or bio robots,” he added. “As for the 70cm creatures I’m not sure, but Maria and Vavita could have been representatives of a certain race which had possibly reached a stage of advancement much earlier than we did. Maybe thousands of years earlier.”

He added that all these members of that advanced race had probably perished as a result of either some great flood or from a comet hit.

"A handful of those who survived met savage tribes of prehistoric men and taught them handicrafts and farming. They mated with local women. They were three-fingered and this genetic feature could make itself evident in future generations,” Korotkov continued.

He didn’t rule out that they could have live separately from the rest and reproduced with one another resulting in genetic degeneration, such as the three unnaturally long fingers.

“By the way, three-fingered creatures can be seen on petroglyphic drawings found in Peru,” Korotkov noted.