A plumber and astronomy enthusiast from Argentina has achieved something that the international astronomical community had failed to do: photograph the exact moment of a supernova’s emergence.

Today, the direct observation of a supernova is thought to be the only way to understand a key aspect of how a star evolves and what its structure is comprised of, because it is the best way to "see" what is happening inside the celestial body. The problem is that no one can predict when and where an supernova will occur, as the phenomena generally only happens two of three times a century in a single galaxy that can contain over 100 billion suns. 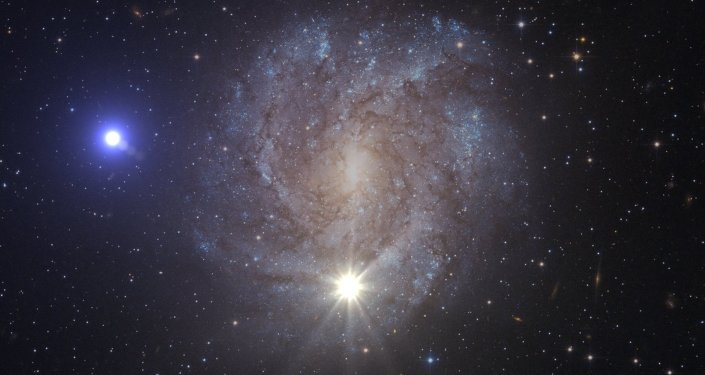 © NASA . ESA/Hubble, S. Geier
Ancient Rock Art Found in India Could Be Oldest Depiction of Supernova
However, astrophysicists have confirmed a theoretical speculation according to which an explosion consists of three stages. To arrive at the speculation, astronomers used data recorded by amateur astronomer Victor Buso who, on September 20, 2016, was "in the right place at the right time," pointing his telescope to spiral galaxy NGC 613, located 70 million light years from Earth. During a single hour of observation, Buso made some forty images, informing the International Astronomical Union that something important is happening.

​Typically, a supernova accompanies the death of a very large star (at least ten times the size of our Sun). When this happens, the star explodes and disintegrates. Understanding how the supernova flash occurs would allow astrophysicists to understand how chemical elements are born and, to some extent, how a star's chemical makeup evolves.

​"A supernova allows us to understand what happens to the celestial body and how it evolves," Melina Bersten of Institute of Astrophysics La Plata, Argentina, told Sputnik Mundo. "The capture of this flash in its early stage [and this is what was done] will allow us to confirm some statements regarding the evolution of the celestial bodies, which before that were restricted only to a theoretical basis."

Throughout almost all of its existence a star emits light, which emerges as a result of powerful energies created inside the celestial body. Nuclear fusion inside a star transforms lighter elements into those that are anatomically heavier. The energy released during this process makes the star more stable, increasing its lifespan. However, at a certain point the star burns through all of its fuel and stops emitting energy and, as there is no longer any powerful resistance the forces of gravity, the celestial body disintegrates in one last spectacular display of energy: a supernova.

​A supernova explosion happens inside the star and, as the flash occurs, the shockwave reaches the surface. At this moment most of the chemical elements produced by the star during its existence disintegrate.

Bersten pointed out that the process takes several hours, appearing like a slow-motion camera flash, but much more powerful.

​Astrohobbyist Buso and his amatuer equipment captured the first of the three stages of a supernova flash during which an explosion occurs and the shockwave reaches the surface.

The second stage takes place over the following 72 hours, as the surface of the star cools. The last stage, sees the former star heat up again due to the process of nuclear fission brought on by the immense weight of the collapsing material, and can go on for several weeks.

Wrapped in a Mystery, Inside an Enigma: How Most Known Supernova Emerged