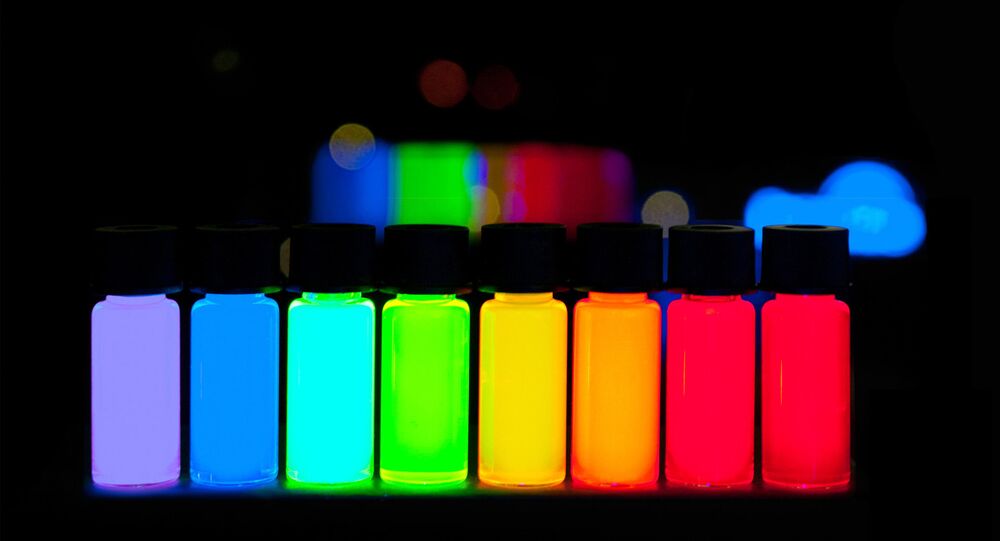 It is impossible to imagine modern medicine without nanotechnology. The use of quantum dots – nanoparticles of less than 1/10,000 the width of a human hair – led to a scientific breakthrough in diagnostics and pharmacology. The National Research Nuclear University MEPhI is now actively exploring how quantum dots can be used in biomedicine.

Quantum dots (also known as artificial atoms) are semiconductor crystals which are so small that the movement of their electrons is confined to three dimensions. This can be compared to a ball in a box, where the ball’s movement is restricted by the box’s walls. The term “quantum”, in this case, means that the different properties of these dots, such as their optical and electrical characteristics, vary with their sizes.

© CC0
Physicists Use Quantum Simulation to Decipher Photosynthesis Mechanisms
Quantum dots were discovered in the 1950s. For a long time, they were mostly of interest to particle physicists. Then, chemists learned to synthesize quantum dots and control their sizes, thus determining their physical and chemical properties. However, then biology and medicine researchers started using quantum dots. They did so after they had discovered how to make them soluble in water and biological fluids and control their sizes, thus predetermining their physical properties in the process.

In medicine, researchers mainly use colloid quantum dots – nanocrystals obtained using chemical high-temperature synthesis. To obtain them, researchers inject a composition with the necessary chemical reagents in a heated environment that includes two or more phase states. As a result, a fast chemical reaction takes place, forming the crystals’ solid bodies – essential parts of quantum dots. Then these particles grow – their sizes are predetermined with an accuracy of about 10 percent. The average size of a quantum dot that can be used for medicinal purposes varies from 2.5 to 5 nanometers. The optical properties of quantum dots depend on their size too: upon the application of external rays, small nanocrystals glow purple, the larger ones, red.

READ MORE: Russian Universities are "Arming" Themselves in the Fight Against Center

The main reason why most nanoparticles cannot be introduced into a human body is that they are toxic to living cells. This refers not just to certain chemical elements that the living cells contain, but to nanotoxicity. Nanoparticles are very small; they are similar to molecules in size. Their introduction causes the proteins in our bodies to adhere to the nanocrystals and turn inside out, thus leading to a sharp response from our immune system, which tries to destroy the “alien” proteins.

In the human body, nanoparticles can also become focal points for the formation of filamentous (fibrils) and twisted proteins, which resemble the plaques that form in those with Alzheimer’s Disease, and which can block the transmission of nerve impulses. There are several ways to prevent the proteins’ adhesion to nanocrystals. Researchers at MEPhI, for example, strive to make the surface of nanoparticles “unappealing” to proteins, thereby ruling out the possibility of adhesion. At the same time, the size of the particles must remain within the norm (2.5 to 5 nanometers), so that the nanocrystals can be removed from the body with a probability close to 100 percent.

“It is most likely that the problem of nanomaterials’ toxicity will never be solved,” said Igor Nabiyev, head of the nano and bioengineering laboratory at MEPhI, and professor at the University of Reims Champagne-Ardenne (France), quoted by RIA Novosti. “However, prospects for their use in medicine will always be determined by weighing up their positive and negative effects on diagnosis and treatment.  Obviously, anti-cancer drugs, to give one example, pose a great threat to the body’s healthy tissues, but there is no other way to destroy tumors. Therefore, the nanobiotechnologists’ current goal is to minimize the effect of toxic substances on the body’s healthy cells and organs. We have to take risks in order to improve the chances of saving lives and improving health.”

© Sputnik / Alexandr Kryazhev
Russia’s Universities Interested in Expanding Cooperation With US - Deputy Minister
The researchers at MEPhI are currently developing a new project for creating carrier particles that contain microcapsules infused with medicine, the walls of which are instilled with magnetic and silver nanoparticles, as well as radioactive and fluorescent quantum dots.  The fluorescent quantum dots enable the capsules to glow, thus allowing researchers to detect their exact location. With the help of a magnet, the researchers will also be able to control the movement of these capsules, sending them in the direction of a tumor. Once the capsules reach the target destination, the researchers will be able to heat the capsules up and open them, using an alternating magnetic field or ultrasound.

It is important to note that quantum dots are not just a research subject: new devices based on nanocrystals, which can be used in practice, are being actively developed. Researchers at MEPhI, for example, are now working on a range of devices that can detect vast numbers of pathogens simultaneously. These devices will allow researchers to detect a whole variety of infectious diseases using just one air sample. A pilot batch is set to be released in 2019-2020.