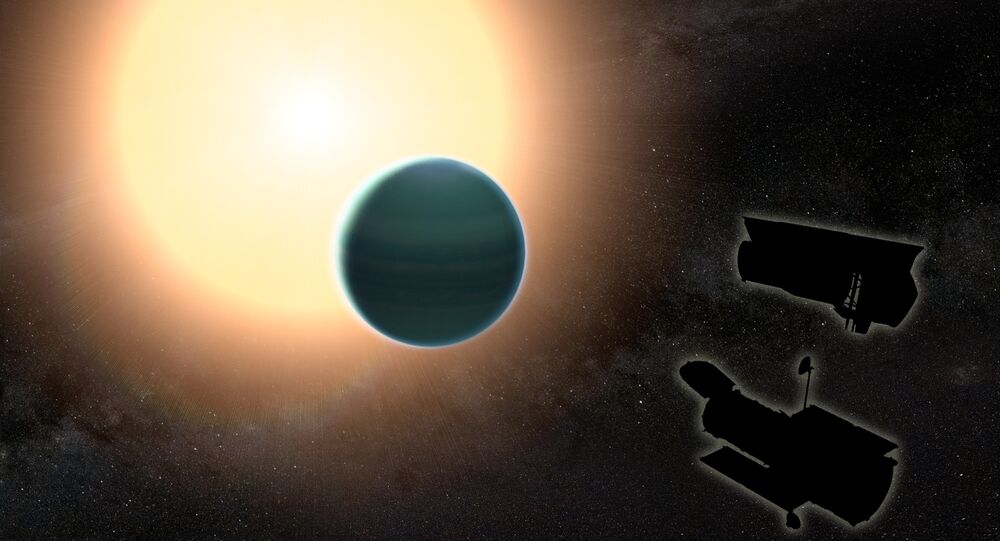 A pioneering new study has uncovered large amounts of water in the "primitive atmosphere" of an exoplanet, which is a similar size to Neptune. The discovery could help uncover how such planets formed, to provide insight into how other planets in galaxies across the universe.

With an atmosphere that's composed almost entirely of hydrogen and helium, with a relatively cloudless sky, the planet dubbed "Warm Neptune" — because it orbits its sun more closely than our own Solar System's Neptune — is 430 light years from Earth.

Despite the vast distance between us, thanks to NASA's Hubble Space Telescope, "Warm Neptune" was discovered in 2011.

#Hubble & @NASAspitzer data was used to study a “warm Neptune” — a planet that's Neptune-sized & close to its star: https://t.co/FWPjr2mGed pic.twitter.com/i3COScP5tZ

Now, a team of international researchers, co-lead by Hannah Wakeford from NASA and Professor David Sing from the University of Exeter, has carried out a detailed study of "Warm Neptune."

What they found was that its primitive atmosphere suggests it was formed closer to its host sun, or later in its solar system development, compared to our solar system's icy gas giant Neptune.

[Artist Concept] Neptune-mass exoplanets like the one shown in this artist's rendering may be the most common in the icy regions of planetary systems. Beyond a certain distance from a young star, water and other substances remain frozen, leading to an abundant population of icy objects that can collide and form the cores of new planets. In the foreground, an icy body left over from this period drifts past the planet. Credits: NASA/Goddard/Francis Reddy #nasa #neptune #exoplanet #space #nasabeyond #astronomy #planet #science

This revelation could change how scientists think about the birth and development of planetary systems in other distant galaxies.

Professor Sing, from the University of Exeter's Astrophysics department said:

"This exciting new discovery shows that there is a lot more diversity in the atmospheres of these exoplanets than we have previously thought.

"This 'Warm Neptune' is a much smaller planet than those we have been able to characterize in depth, so this new discovery about its atmosphere feels like a big breakthrough in our pursuit to learn more about how solar systems are formed, and how it compares to our own."

It's a memorable moment for the scientists involved.

© Photo : Pixabay
'I'm Your Venus, I'm Your Fire': Why Earth's Planetary Twin Is So Dangerous
Less memorable, or catchy, is the name they've assigned the planet: HAT-P-26b.

However, despite it's obscure moniker, its discovery is significant because there are very few times when scientists have been able to detect water in the atmosphere of an exoplanet of this size and mass.

They're using HAT-P-26b, aka "Warm Neptune's" measurements to help work our how this vast world may have formed.

"Astronomers have just begun to investigate the atmospheres of these distant Neptune-mass planets, and almost right away, we found an example that goes against the trend in our solar system.

"This kind of unexpected result is why I really love exploring the atmospheres of alien planets."