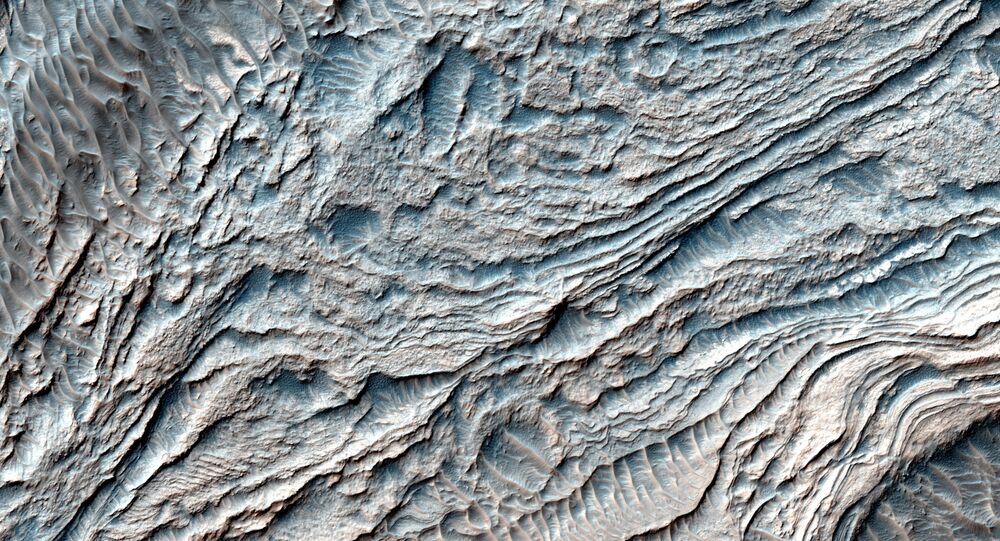 NASA’s Mars Reconnaissance Orbiter (MRO) has snapped photos of the Melas Basin, which researchers believe was once the location of a 1,300-foot-deep lake when Mars was a watery world billions of years ago.

In the MRO image, "a group of steeply inclined light-toned layers is bounded above and below by unconformities (sudden or irregular changes from one deposit to another)," according to the NASA statement that accompanied the released image.

The unconformities and layers likely resulted from materials being deposited on the lake floor by a river or river delta that flowed into the basin.

"The layered deposits in Melas Basin may have been deposited during the growth of a delta complex," NASA said in the statement. "This depositional sequence likely represents a period where materials were being deposited on the floor of a lake or running river."

Data from the MRO and NASA's Curiosity Rover suggests that when Mars was but a baby world, it was covered in a shallow layer of liquid water, about 450 feet deep. Asteroid strikes and solar wind slowly deprived Mars of its atmosphere, but some of the water remained as both frost and lakes. Little by little, the water sublimated into a gaseous form and escaped into space.

Yet water remains even on the desiccated red planet, mostly at the polar ice caps. The MRO also discovered hydrated sulfates (sulfuric salt) along the surface of the Melas Basin.

© Photo : Pixabay
No Oxygen? No Problem! Mars’ Volcanoes May Have Created Conditions Ripe for Life

Much of what we know about Mars is thanks to the MRO, which has been orbiting since 2006. Its high resolution camera has been continuously beaming photographs back to Earth for over a decade now, and it has single-handedly produced more data than all other interplanetary probes put together. In late March 2017, it completed its 50,000th lap around the Red Planet.

The most recent round of photos are from Mars' equinox last May, where the entire planet is bathed in sunlight and thus becomes particularly visible. Coincidentally, the equinox coincided with the period when the sun and Mars were on opposite sides of Earth, allowing for excellent communication between ground control and the MRO.

The Melas Basin was one of the landing sites considered for Mars 2020, the next generation of NASA's Martian rovers. In February 2017 it was eliminated from consideration along with several other sites.