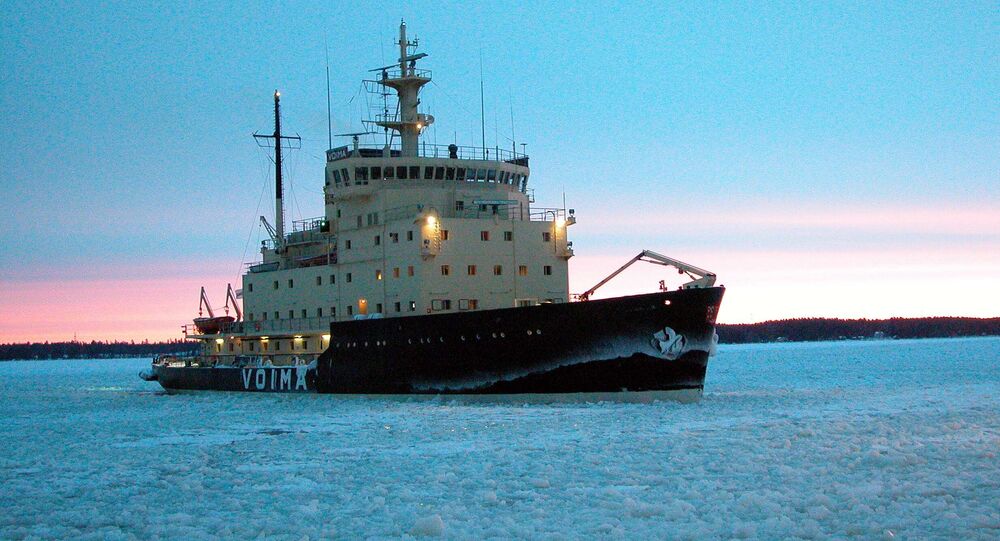 Oddly enough, global warming and milder winters have led to more severe ice conditions in the Baltic Sea and the Gulf of Bothnia. Today, icebreakers are already struggling to get through towering compacted ice and the problem may become exacerbated in the future, unless more powerful icebreaking vessels step in.

© Wikipedia / Mika Hovilainen, Esko Huttunen
Russian-Built, Gas-Powered 'Green' Icebreaker Starts Operating in Finland
As surprising as it may sound, milder winters don't make life easier for icebreakers. On the contrary, thaws alternating with bouts of frost are a nightmare for icebreaker fleets, Finnish experts found. During winters with a regular cold, solid ice grows to become 50-60 centimeters thick and is easy to get through. Although milder winter temperatures at first glance make ice thinner, it also leads to the formation of an ice crust, which, with the aid of harsh winds, grows to several meters of pack ice.

According to ice researcher Patrik Eriksson of the Finnish Meteorological Institute, the Baltic ice may become 5-6 meters thick, and this phenomenon has become particularly common over the past decades of milder winters. Eriksson noted that short cold spells combined with western winds lead to ice floes clogging to pack ice, which is a bigger problem for Finland due to the wind pattern.

The greatest problems occur in the Gulf of Bothnia, where an almost impenetrable pack ice zone is formed each winter, Tero Vauraste, president of Finnish state-owned icebreaker fleet Arctia, told Finnish national broadcaster Yle. According to Vauraste, even the icebreaker Kontio ("Bear"), one of the company's most powerful, proved to have difficulties, which in the future may pave the way for new kinds of icebreakers.

Climate scientist Hilppa Gregow from the Finnish Meteorological Institute clearly ascribed the changing ice conditions to climate change, which according to him became particularly noticeable since the 1990s.

"Today we have it much hotter than for instance in the early 1990s. At the same time we tend to have these very cold winters, which makes it hard to realize there is a global warming going on," Hilppa Gregow told Yle, venturing that the "difficult" ice will increase in the future.

© Wikipedia / Petri Krohn
Russia to Build Cruise Liners for Arctic Tourism at Its Helsinki Shipyard
Tero Vauraste of Arctia supposed that the future will set higher demands on icebreakers, given that the climate is predicted to become gradually hotter in the following 20-30 years, together with harsher winters and more wind.

The Arctech Helsinki Shipyard, one of Finland's largest shipyards specializing in icebreakers and Arctic vessels, is currently owned by Russia. The Helsinki-based company currently has 550 employees and is in the process of building six ice-breakers intended to update Russia's icebreaker fleet, which is the largest in the world.

The United Shipbuilding Corporation (USC), which owns Arctech, is also expected to begin Russia's most powerful new-generation nuclear icebreaker in 2019.