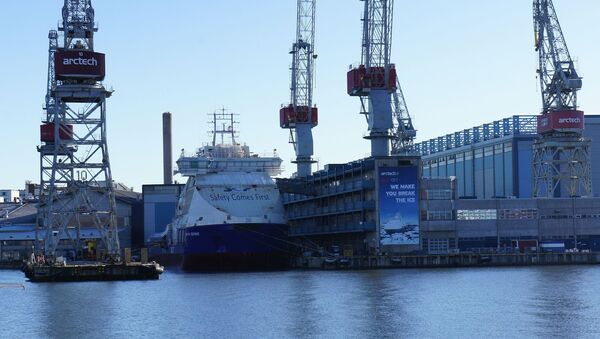 © Wikipedia / Petri Krohn
Subscribe
Russia's United Shipbuilding Corporation (USC) is poised to begin production of sea ferries, cruise liners and yachts for Arctic tourism at its Helsinki shipyard, which is currently loaded with orders for the construction of icebreakers for the Russian shipping company Sovkomflot.

Russian-Built, Gas-Powered 'Green' Icebreaker Starts Operating in Finland
By its own admission, USC plans to resume the construction of cruise ships at Arctech Helsinki Shipyard situated in the Finnish capital, which was the shipyard's specialty until 2009.

According to USC spokesman, the company is currently negotiating with customers from Japan, Monaco and the Nordic countries. At present, however, USC chose not to disclose either the exact dates or the names of potential customers.

According to analyst Anna Krasavtseva of the Russian ship-building portal Sudostroenie.info, Arctech Helsinki Shipyard is capable of producing cruise vessels with gross tonnage of up to 11,000 tons and a value of €130-150 million ($139-160mln), Russian economic portal RBC reported.

USC vice president for civil shipbuilding Yevgeny Zagorodniy told Russian news service RNS that Arctech Helsinki Shipyard is preparing for a period of sustainable development, given the recent revival of the Russian-Finnish trade relations following a protracted slump exacerbated by the sanctions war.

Meet the Vladivostok, the World's Most Powerful Non-Nuclear Icebreaker
USC also hopes to receive new orders for the construction of icebreakers after successfully concluding the Polaris icebreaker ordered by the Finnish shipping company Arctia. The brand new icebreaker, which runs on liquefied natural gas (LNG), was instantly dubbed "the world's most ecologically friendly in its class" and commenced its service in Finland's waters of the Gulf of Bothnia.

After Crimea's historic re-unification with Russia, USC was put on the US sanctions list, which was expected to pose difficulties for payment and finance issues. However, the sanctions pressure did not prevent Helsinki City from prolonging the land-lease contract with Archtech, which is wholly in Russian possession. According to Helsinki City Board member Hannu Oskala, Finland need not take US sanctions into account, since the shipyard solely concentrated on civilian vessels.

USC is a Russian state-owned shipbuilding company with about 80,000 employees and 60 shipyards, which was created in 2007 through a series of presidential decrees. In 2014, USC acquired full control over Arctic Helsinki Shipyard, which specialized in the construction of icebreakers.

​Arctech Helsinki Shipyard currently has 550 employees and is in the process of building six ice-breakers, with more on the order list. All of them, apart from the Polaris, are going to Russia. Five years ago, Archtech decided to specialize in Arctic shipbuilding.

000000
Popular comments
Nice one in so many ways.
anne00marie
18 January 2017, 12:49 GMT
000000
This is an area where Russia should BEGIN now. Use a SWIFT ANALOGUE to bypass sanctions. First say this company. Pass a fiber optic , for direct payment. Keep it ONLY online with Russia's SWIFT ANALOGUE to a Russian bank near there. Or with a bank in Russia. This is the beginning of a new ERA. Then it could be done by satellites. Instead of a line a satellite transmit the payment!!!! ARCTIC tourism will be GREAT.. Act with humanitarian groups worldwide to conserve and preserve the animals. With money flowing, a nursery for polar bears, seals, whales etc could be made. Tourists WILL go see and give some donations. When OIL GAS extracted, first MOVE all animals. Until is VERY safe and they return slowly. ANIMAL LOVERS WILL LOVE it.l And help too. Invite them to forums. So they express their ideas. ANYONE illegally getting in there, will have ships confiscated. PERMANENTLY, no matter WHO SAY WHAT. And MUST pay FINES to come OUT. Say 30,000 Euros in Ruble , per head count. Time Russia use ONLY Rubble inside Russia. Of course all cash could be exchanged at banks.
cast235
18 January 2017, 15:13 GMT
000000
Newsfeed
0
New firstOld first
loader
LIVE
Заголовок открываемого материала
Access to the chat has been blocked for violating the rules . You will be able to participate again through:∞. If you do not agree with the blocking, please use the feedback form
The discussion is closed. You can participate in the discussion within 24 hours after the publication of the article.
To participate in the discussion
log in or register
loader
Chats
Заголовок открываемого материала
Worldwide
InternationalEnglishEnglishMundoEspañolSpanish
Europe
DeutschlandDeutschGermanFranceFrançaisFrenchΕλλάδαΕλληνικάGreekItaliaItalianoItalianČeská republikaČeštinaCzechPolskaPolskiPolishСрбиjаСрпскиSerbianLatvijaLatviešuLatvianLietuvaLietuviųLithuanianMoldovaMoldoveneascăMoldavianБеларусьБеларускiBelarusian
Transcaucasia
ԱրմենիաՀայերենArmenianАҧсныАҧсышәалаAbkhazХуссар ИрыстонИронауОssetianსაქართველოქართულიGeorgianAzərbaycanАzərbaycancaAzerbaijani
Middle East
Sputnik عربيArabicArabicTürkiyeTürkçeTurkishSputnik ایرانPersianPersianSputnik افغانستانDariDari
Central Asia
ҚазақстанҚазақ тіліKazakhКыргызстанКыргызчаKyrgyzOʻzbekistonЎзбекчаUzbekТоҷикистонТоҷикӣTajik
East & Southeast Asia
Việt NamTiếng ViệtVietnamese日本日本語Japanese俄罗斯卫星通讯社中文（简体）Chinese (simplified)俄罗斯卫星通讯社中文（繁体）Chinese (traditional)
South America
BrasilPortuguêsPortuguese
NewsfeedBreaking
18:24 GMTUS Treasury Chief Warns ‘Economic Catastrophe’ Will Befall America If Debt Ceiling Deal Not Reached
18:09 GMTPicasso’s Daughter Donates 9 Heirlooms in Tax Arrangement With France
18:01 GMT'F**k Off, Leave Me Be Please': Sex Education’s Asa Butterfield Annoyed With Pic-Taking Fans
17:56 GMT'Booby' Prize: XR's Topless Protester Goes Bust to Raise Funds on OnlyFans
17:51 GMTPorn Case: Businessman Raj Kundra Granted Bail After 2 Months of Arrest
17:47 GMTKosovo Police Reportedly Use Tear Gas Against Serbian Protesters
17:44 GMTLawyer for Trump Organization’s Ex-CFO Has ‘Strong Reason to Believe’ More Indictments Looming
17:36 GMTMystery Death: Noted Hindu Seer Found 'Hanging Inside Monastery' in India
17:23 GMTFans Slam PSG Boss Mauricio Pochettino as Lionel Messi's Reaction to Being Subbed Goes Viral
17:16 GMTWoman Spots 4Ft-Long Crocodile on the Loose in a Yorkshire Garden
17:14 GMTUN Chief Calls for Decisive Action to Avert 'Climate Catastrophe' Ahead of Glasgow Summit
17:08 GMT'Multiple Injuries' Reported in Shooting at Virginia High School
17:05 GMTAlien Tech Could Cause 'Solar Explosion' That Might 'Wipe Out Life on Earth', Blogger Claims
16:22 GMTTwitter Mocks Journo Claiming Biden Victim of ‘Uncontrollable Events’
16:01 GMTUS 'Has No Intention to Extend Nuclear-Powered Sub Support' to Other Countries After Australia
15:45 GMTMystery Deepens Around Gabby Petito's Disappearance as FBI Finds Body Matching Her Description
15:45 GMTConcerns Over 'So Many Open to Pursuing a Career in Pornography' Amid UK Survey Results
15:40 GMTSwiss Foreign Ministry Calls Reports on Cancellation of Parmelin-Macron Meeting Incorrect
15:09 GMTRadical Daesh Women Blamed for Dozens of Killings at Al-Hol Syrian Detention Camp
15:00 GMTPutin Says Perm University Shooting is Huge Disaster for Whole Country