German scientists have proposed a variation on the Breakthrough Starshot light-propelled nano spacecraft, which would allow the probe to brake and properly study the closest star system to our Solar System, Alpha Centauri.

© AP Photo / NASA/file
One of a Kind: Hubble Telescope Captures the Death of a Star (PHOTO)
German astrophysicists have revealed a new plan to travel to Alpha Centauri, the closest star system to our Solar System, in a journey projected to take almost 100 years.

Their proposal is intended to complement the Breakthrough Starshot project announced last year, which proposes using light-propelled nano spacecraft to reach Alpha Centauri in a journey of just 20 years.

The Alpha Centauri star system is 25 trillion kilometers (4.37 light years) away from Earth, and it would take today's fastest spacecraft at least 30,000 years to get there.

Breakthrough Starshot proposes transporting a tiny probe to Alpha Centauri at a speed of 20 percent the speed of light, using ultrathin, highly reflective one gram photon sails, powered by a 100 gigawatt array of lasers on Earth. 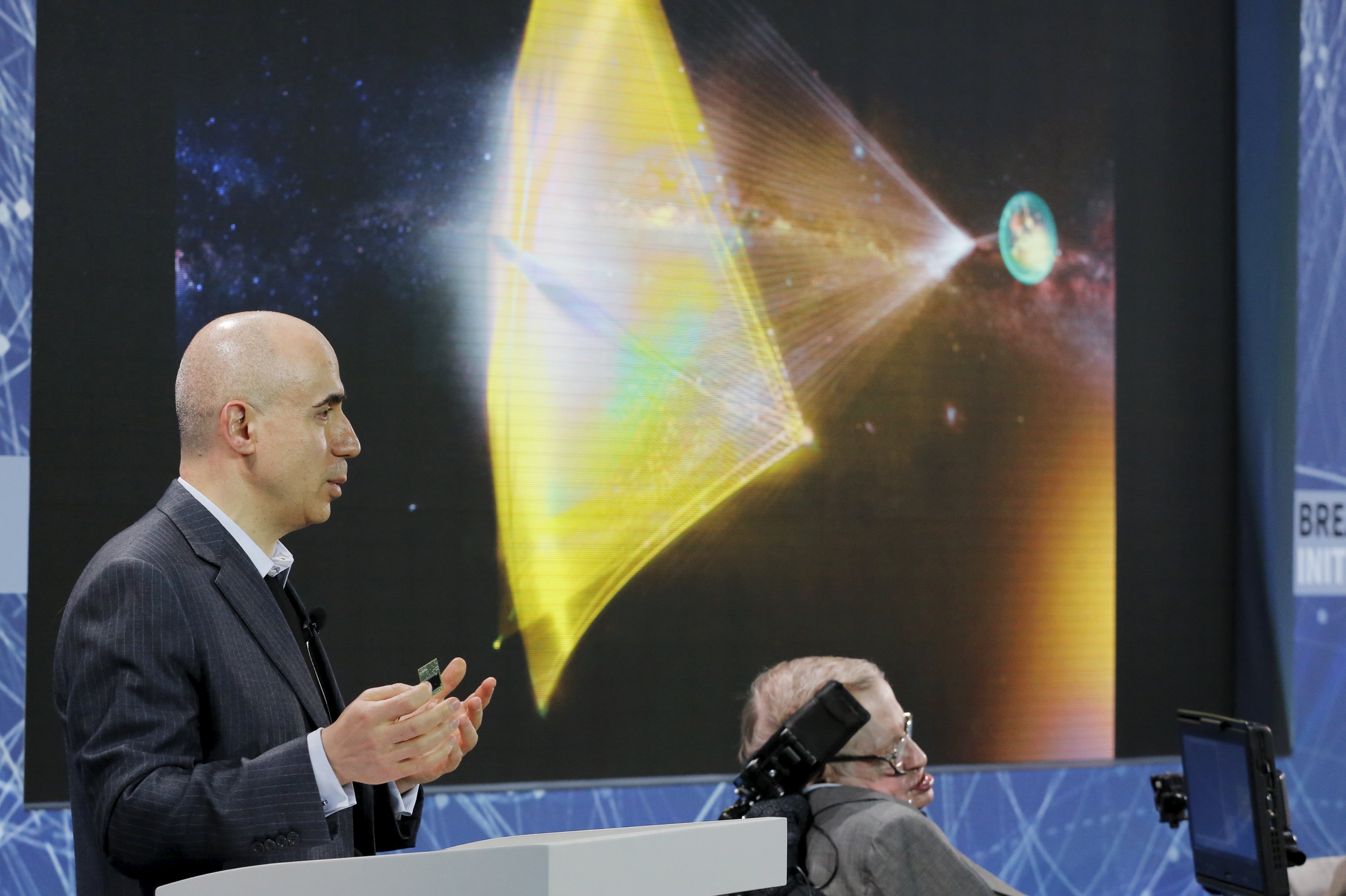 © AP Photo / Lucas Jackson
Investor Yuri Milner holds a small chip during an announcement of the Breakthrough Starshot initiative with physicist Stephen Hawking in New York April 12, 2016
The movement of the spacecraft relies on a concept known as photonic propulsion proposed by NASA scientist Philip Lubin, who is also working on the Starshot project.

When the powerful laser array on Earth shines on the reflective surface of the Starshot probe's lightsail, the momentum carried by energized photons within the laser beam is supposed to propel the spacecraft forward.

However, Breakthrough Starshot have not yet come up with a way of slowing down the probe when  it reaches its destination, giving its instruments time to examine the system's three stars and orbiting planets.

Writing in the Astrophysical Journal Letters, Rene Heller and Michael Hippke from Germany's Max Planck Institute for Solar System Research put forward a variation on the Breakthrough Starshot proposal which would make it decelerate.

© Photo : European Space Agency, ESA
European Space Chief Claims Moon Villages to Be Established ‘Rather Soon’
The idea is to use a combination of the stars' gravitational pulls and their photon pressures to decelerate the interstellar light sails once they reach the Alpha Centauri star system.

Instead of a small laser-powered reflective photon sail, the spacecraft could use a much bigger, solar-powered light sail.

"The sail could be made of graphene, an extremely thin and light but mega-tough carbon film," Heller said in a press release.

To get sufficient thrust, a probe weighing less than 100 grams would need a light sail measuring 100,000 square meters, equivalent to 14 football pitches.

When it reaches the triple star system, the probe could decelerate by way of a swing-by-manoeuver that uses stellar radiation and gravitational pull to decelerate and maneuver past each of the three stars in the system.

The scientists calculated that a larger ten-gram probe, able to carry more instruments than Breakthrough Starshot would have a projected flight time to Alpha Centauri of almost 100 years. It would have a top speed of 13,800km per second, or 4.6 percent of the speed of light.

Some theoretical trajectories of the probe offer the prospect of a round trip that could bring samples back to Earth.

"Our new mission concept could yield a high scientific return, but only the grandchildren of our grandchildren would receive it. Starshot, on the other hand, works on a timescale of decades and could be realized in one generation. So we might have identified a longterm, follow-up concept for Starshot."

Heller said that the researchers are in discussion with the Breakthrough Starshot team, with the aim of turning their theory into something that will work in practice.

"Many great visions in the history of mankind had to struggle with seemingly insurmountable hurdles."

"We are now approaching an age in which humans can leave their own star system and explore extrasolar planets using fly-by missions."

Sparkling Stars of the Universe Shine Bright in Philippines