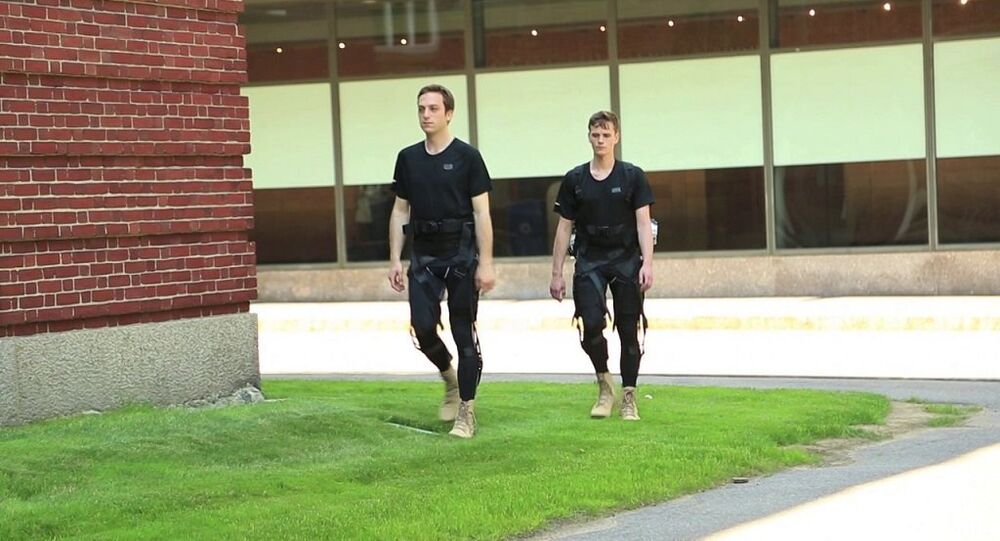 It is time to get rid of a stereotype envisaging an exoskeleton as something bulky and making human walk like Robocop: now it is just a pair of comfortable trousers.

Based on the deep analysis of the physiology and biomechanics of human walking, researchers at the Wyss Institue at Harvard University, supported by DARPA, have engineered a slick and convenient device which can help both healthy individuals as well as persons with disabilities.

The new exoskeleton comprises a backpack module with a pair of motors, a waist belt, two calf stripes and two thigh pieces.

The principle of human biomechanics underpinned the research.

“The body and legs have a pendulum-like motion. The purpose of muscles is then to inject impulses or bursts of energy at the right time in order to maintain this motion,” the Wyss Institute’s Ph.D. Stefano De Rossi explained.

In compliance with this pattern, the exosuit activates when a person starts walking.

“So when we apply force in the suit, this is acting in parallel with our biological muscles and tendons”, the institute’s Ph. D. Conor Walsh elaborated.

YOUTUBE/ReWalk by ReWalk Robotics
First FDA-Approved Exoskeleton Allows Paralyzed People to Walk (VIDEO)
The suit mimics the anatomy of the human body and sends impulses to the working muscles in resonance, making motion easier by saving energy and thus enhancing the efficiency of motion. When a person walks, the suit adds extra spring in the wearer’s gait and decreases pressure on joints.

To achieve this critical goal of timing, the team used new soft sensors which are in touch with muscles and monitor the applied force and movements, sending the signals to the motors.

In order to check the effectiveness of the exosuit, healthy volunteers had to carry a backpack equivalent to some 30 percent of their body mass at a speed of 1,5 m/s on a treadmill. They had to walk normally, with a load, and with a load and the exoskeleton. The experiment proved that “a significant metabolic power reduction” was observed while using the suit, and the participants’ hips, ankles and knees were subjected to lesser pressure.

The military, rescuers and people with special needs have shown most interest in exoskeleton technologies. Russia’s Ratnik combat kit could be augmented with an exoskeleton in the future.

An exoskeleton can also help in daily activities, such as:

… and Even Lifting a MINI Cooper!