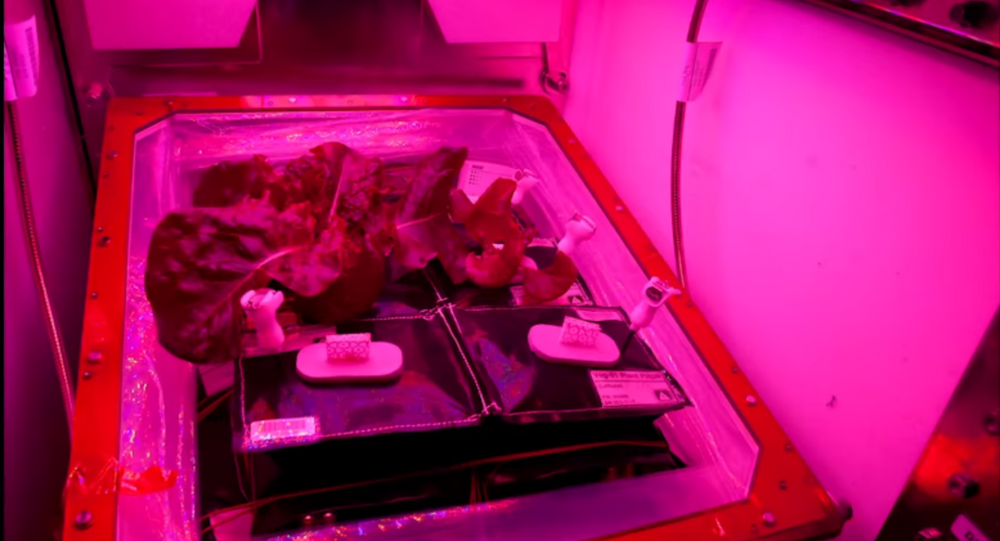 Achieving a major milestone for the future of space exploration, astronauts onboard the International Space Station sat down to a meal prepared with space-grown lettuce.

For this first meal, scientists kept it simple, preparing red romaine lettuce brushed with citric-acid based sanitizing wipes. It’s not exactly five-star, but it has to be a major improvement over freeze-dried peas.

"There is evidence that supports fresh foods, such as tomatoes, blueberries, and red lettuce, are a good source of antioxidants," Ray Wheeler, the project’s lead researcher, told NASA’s website.

How do you grow lettuce without the sun? The crops have spent the 15 months inside a system called Veg-01, which uses blue, red, and green LED lights which allows the plants to undergo artificial photosynthesis.

There’s also the gravity challenge. Water doesn’t exactly seep into the soil in zero-g’s, and plant roots don’t even know in which direction to spread. To overcome those obstacles, astronauts packed the seed and soil into special, self-contained "pillows." Stakes were also placed to help guide the roots downward.

Astronauts ate half of the harvest, while the other half will be frozen and sent back to Earth for further analysis.

Which begs the question: Did scientists just eat astro-lettuce without knowing if it’s safe? Isn’t that how the Fantastic Four were created?

Not quite. A test for bacterial contamination came up negative.

If successful, space gardening could prove vitally important for manned missions to space. It could also be crucial for any future plans to establish a settlement on foreign planets. A colony on the Moon or Mars is much more likely if those bases can grow enough food to become self-sufficient.

Freshly grown food can also be of enormous benefit to the mental health of the astronauts.

"The farther and longer humans go away from Earth, the greater the need to be able to grow plants for food, atmosphere recycling and psychological benefits," Gioia Massa, a scientist involved in the experiment, said in a statement.

"I think that plant systems will become important components of any long-duration exploration scenario."

A single harvest of lettuce may be the first step, but it could pave the way for future space stations to have entire multi-crop farms onboard.

And after that, extraterrestrial livestock? That would be the very distant future. Having a cow floating around the International Space Station would probably do more harm than good.

Russia to Conduct Series of Simulated Flights to Moon, Mars in 2016-2020