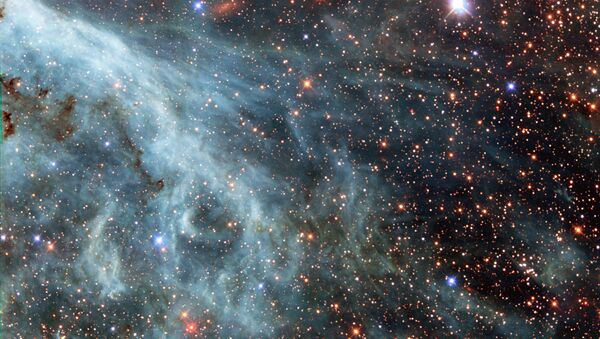 In May, scientists observed a tiny blue speck of light in deep space. That turned out to be EGS-zs8-1, which, at the time, was the most distant galaxy ever discovered. Over 13 billion light-years from Earth, it takes 13 billion years for its light to reach us, and EGS-zs8-1 offered scientists new possibilities for understanding the early universe.

"How galaxies were building up across the universe," Yale astronomer Pascal Oesch told NPR. "These very early galaxies are the building blocks for everything that we see around us today."

It’s located roughly 13.2 billion light-years away, and we’re observing the galaxy as it was only 600 million years after the Big Bang. It’s already helping us get a clearer picture of cosmic evolution in the ancient universe.

Using an infrared spectrograph, scientists with the W.M. Keck Observatory in Hawaii detected the galaxy’s “Lyman-alpha emission line,” the heating up of hydrogen gas due to ultraviolet radiation from newborn stars.

“We frequently see the Lyman-alpha emission line of hydrogen in nearby objects, as it is one of the reliable tracers of star formation,” the study’s lead author Adi Zitrin, of the California Institute of Technology in Pasadena, said in a statement.

"However, as we penetrate deeper into the universe, and hence back to earlier times, the space between galaxies contains an increasing number of dark clouds of hydrogen, which absorb this signal."

These massive clouds of hydrogen between galaxies kept the early universe fairly muddled. Think of lampposts along a street on a foggy day. You might be able to see the immediate vicinity when standing beneath one of the lamps, but the surroundings beyond remain shrouded.

As stars began to form in those early galaxies, the resulting radiation started to interact with the clouds, breaking down the hydrogen atoms into its constituent parts. Known as “cosmic reionization,” those clouds had to be broken down before Lyman-alpha light could be observed, and, theoretically, the process should have spread across the universe in a relatively uniform way.

But given that we can detect Lyman-alpha light in a galaxy as old as EGSY8p7, it suggests that cosmic reionization may have come about in a splotchy, less uniform pattern.

"In some respects, the period of cosmic reionization is the final missing piece in our overall understanding of the evolution of the universe," Zitrin said.

"In addition to pushing back the frontier to a time when the universe was only 600 million years old, what is exciting about the present discovery is that the study of sources such as EGSY8p7 will offer new insight into how this process occurred."

The study will be published soon in the Astrophysical Journal Letters, but by then, scientists may have discovered an even more distant galaxy, hiding somewhere within the 600 million light-year stretch remaining before the end of the observable universe.