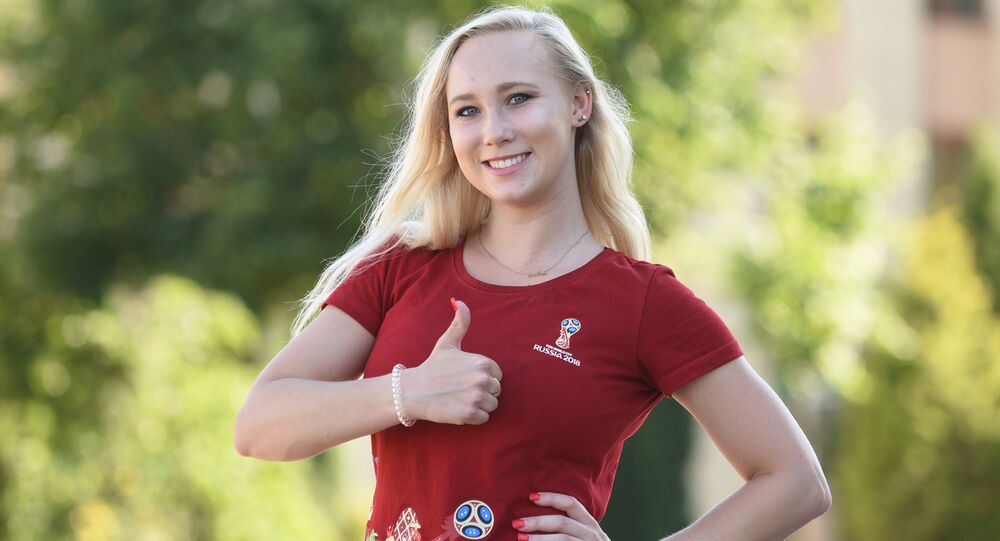 Nearly American Volunteer: World Cup-2018 Is a Golden Chance to Return to Russia

FIFA's World Cup 2018 has drawn volunteers not only from Russia’s most distant corners, but from all around the world. Polina Shchennikova, although she has a Russian name, has been living in the United States practically since birth. In an interview with Sputnik’s project "Volunteer’s Year" she detailed why she has travelled to Russia.

Her family moved to Texas after Polina’s father, a gymnast, was offered a job there; overall she spent no more than two months in Russia, as she went to visit her relatives in Moscow.

She eventually followed in her sporty family’s footsteps and also became a gymnast. She performed for the US national team and tried out for the summer Olympics in 2016, but couldn’t continue due to a shoulder surgery. She is now studying sports management at the University of Michigan.

Nevertheless, Polina has close ties to Russia. In the beginning of the interview, Polina shared her plans to meet the next day with a teammate of her granddad, Leonid Arkayev, an honored gymnastics coach of the USSR and Russia. In Saransk, there is even a gymnastics center named after him; he worked there for a long time.

"At some point, our professor told us that five students from our university have a chance to travel to the World Cup as volunteers. I instantly took note of it, as the major championship was to take place in Russia, and I haven’t been here for ages," Polina said.

She was also very interested in trying to work in a sport other than gymnastics, which her future profession essentially stipulates.

"At first, I was afraid of travelling to Saransk, as I knew nothing about it; but when I arrived, my first impression was that it was a clean city with very kind people around. When I left the train, one woman seeing my perplexity, even offered me a ride," Polina shared her emotions of the first moments in Saransk.

At the World Cup, Polina is doing volunteer work in television and radio broadcasting; most particularly, she is assisting her American coordinator at the stadium to communicate with the rest of the team, as she speaks Russian.

"In the future, I would also like to work in television and radio broadcasting, and my volunteer assistance at the championship opened my eyes to how difficult it is and how quickly one has to think and react, so that the audience does not notice any problems. This is the first step to my dream job," the volunteer remarked.

In the long run, she would gladly sign up as a volunteer for other sporting events. For the time being, she is free and walks around the city impressed by how hospitable the locals are.

"When in a shop, I just couldn’t pick the right size T-shirt for my uncle, and one man, having noticed my problem, tried all the T-shirts on himself, which helped me to make a choice."

Polina says the World Cup is giving her priceless experience, which she will take back home. It made her wise to the fact that important things are by far not always easy to accomplish, and she is certainly sharing her memories of Saransk:

"The city is preserving its authentic culture. Those who will come here, will definitely see how local people love their place and will take this affection back home," she added.

FIFA's World Cup kicked off on June 14 and will last till July 15 across 11 Russian cities.

Thrill of Victory and Agony of Defeat: Fans Get Emotional During World Cup