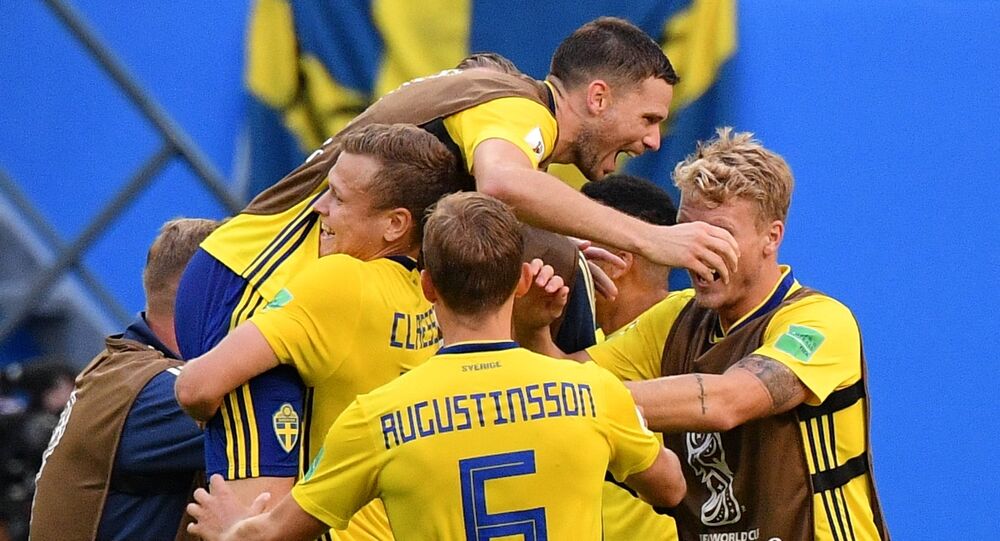 Switzerland looked the better side in an uninspiring first half but failed to convert the few chances they created and Sweden midfielder Emil Forsberg broke the deadlock 66 minutes in.

Forsberg's powerful but seemingly unthreatening strike from the edge of the box was deflected off defender Manuel Akanji's foot to catch goalkeeper Yann Sommer unawares.

© Sputnik / Alexander Wilf
Belgium Beats Japan 3-2 in Hard Fought FIFA World Cup Playoff Match
Switzerland pushed for an equalizer in the closing stages of the game but their hopes of a comeback were ruined after defender Michael Lang was shown a straight red card with second to go for what seemed to be a last-gasp foul.

The referee pointed to the spot but then overturned his original decision after consulting the video referee assistant system. Sommer saved the ensuing free-kick right before the final whistle.

Sweden last played in the last eight at the 1994 FIFA World Cup in the United States, where they eventually beat Bulgaria 4-0 in the third-place match.

Janne Andersson's side will next play England or Colombia in Samara on Saturday.

Earlier in the day, Achilles the cat, who lives at St. Petersburg's Hermitage Museum and serves as the animal oracle for the 2018 FIFA World Cup, predicted Switzerland's victory over Sweden in the round of 16.

Last week, Sweden thrashed Mexico 3-0 in Yekaterinburg to book a spot in the knockout stage of the FIFA World Cup, while Switzerland drew 2-2 with Costa Rica.

The World Cup will continue until July 15, with the matches being played at 12 stadiums across 11 Russian cities.