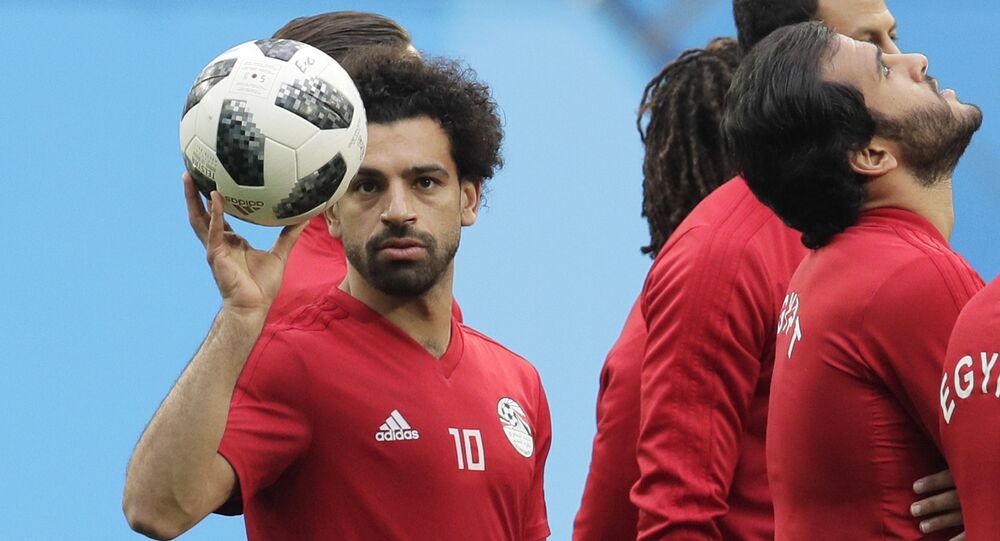 Salah in, Dzagoev out: Russia vs Egypt at FIFA World Cup

After smashing Saudi Arabia’s team during the opening match of the FIFA World Cup in Moscow, the Russian national football team will now encounter Egypt’s squad in St. Petersburg.

Egypt fans’ morale has been boosted by the news that Liverpool superstar Mohamed Salah will play in the game after suffering a dislocated shoulder in the Champions League final against Real Madrid, which spread fears that the player would miss the World Cup.

READ MORE: Russia to Have No Problems Against Egypt If 'Play at Our Level' — Deputy PM

His comeback has been hinted at by the sportswear giant, Adidas, who tweeted a video featuring Salah, with the caption: “Tomorrow. 100 million strong.”

…and then tweeted by the player himself:

Salah’s fans, who view him as the squad’s talisman, have voiced their hopes that his return will boost the team’s performance during the upcoming game after the striker was forced to miss the match with Uruguay, which ended in defeat for Egypt.

Salah is without doubt the best player in the whole entire World ❤so why not:")

#RUSEGY we hope to see a good game from our players and hope to see our first goal after 28 years, Best Luck For Egy we believe in you @MoSalah @ElNennY @Trezeguet @Hegazi @Melshenawy 🇪🇬 🇪🇬 🇪🇬

We will be behind you to support you, underneath you to lift you, and beside you to overcome anything. ربنا معاكم.

Mo Salah do it today. Do for Africa. Do it for Egypt. Do it for your fans. pic.twitter.com/AVobSvB6FC

© REUTERS / Andrew Boyers
Egypt Striker Salah Would Have Helped Team in 1-0 Uruguay Defeat - Uruguay Coach
While Salah will be suiting up, Russia will miss its star player, midfielder Alan Dzagoev, who sustained a hamstring injury in the first half of Russia’s 5-0 rout of Saudi Arabia.

The footballer emphasized that it was hard to tell the reason for the injury since he had been training properly, and stated that he would resume training sessions in the gym and start doing some exercises.

In the meantime, fans have been trying to predict the result of the forthcoming match and bet odds and tips on Twitter:

I'm going for #RUSEGY to have the most goals in them. ✔✔

Both teams with great attacking flair and the return of Mo Salah to the Egyptian starting XI should make it a feisty encounter.

I think this game will end in a draw. If Russia draw they are virtually through to the next round. I think they'll keep things tight and make life difficult for Egypt.

What if I told you that Egypt will either draw or lose against Russia? They won't win.

If Salah plays, they have a good chance. Egypt has a good squad. They're playing for their life in this #WorldCup later today. Will be a good match v Russia.

Very optimistic that Egypt will win the match against Russia https://t.co/aej5h7LwYm

Another prediction will be made by Achilles, a snow-white cat oracle for the FIFA World Cup, living at St. Petersburg’s Hermitage Museum, later on Tuesday – its two previous forecasts, made during the 2017 Confederations Cup proved true.