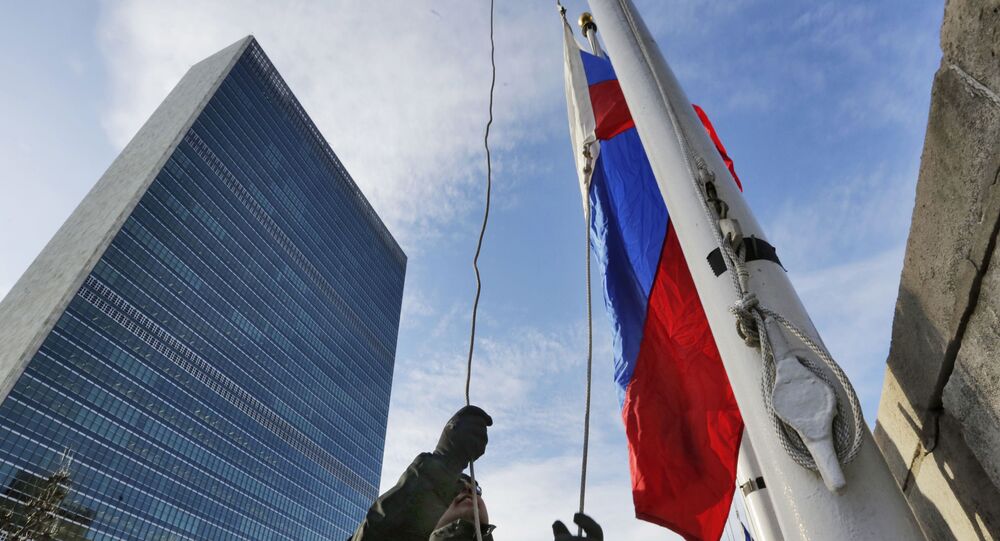 UNITED NATIONS (Sputnik) - The United States’ approach to impose sanctions on Chinese and Hong Kong individuals and entities in relation to Iran's nuclear program is wrong and Russia will continue to do business with the Islamic Republic, Russian Deputy Permanent Representative to the United Nations Dmitry Polyanskiy said in a statement.

Earlier on Monday, US Secretary of State Mike Pompeo announced it has imposed sanctions on six Chinese companies and two individuals for their dealings with the central Iranian shipping company IRIS.

"Wrong approach again… The United States playing a ‘world policeman,’ substituting the UN Security Council is an unwelcome role," Polyanskiy said via Twitter. "We are doing and will be doing business with Iran and it's not up to the United States to tell us or others what they can or can't do. Stop humiliating the United States in this pointless endeavor!"

On Sunday, the Iranian Foreign Ministry said in reference to the UN Security Council resolution 2231 that all restrictions on the transfer of arms to Iran ended. Pompeo responded by saying that the United States was ready to sanction any individual or entity that supplied conventional arms to Iran.

Iran, the United States, Russia, China, Germany, France, the United Kingdom, and the European Union signed a nuclear agreement in July 2015 to keep Iran’s nuclear program peaceful in exchange for sanctions relief. One of the agreements’ provisions stipulated the ban on conventional weapon sales to Iran would be lifted in five years.

The US proposed prolonging the arms ban in the UN Security Council on 14 August 2020, but the proposition was declined. Consequently, Iran is now able to procure any arms without restrictions.

Russia Open to Intensive Consultations With US on Strategic Stability

US Negotiator Accuses Russia of 'Backtracking' on Nuclear Agreement