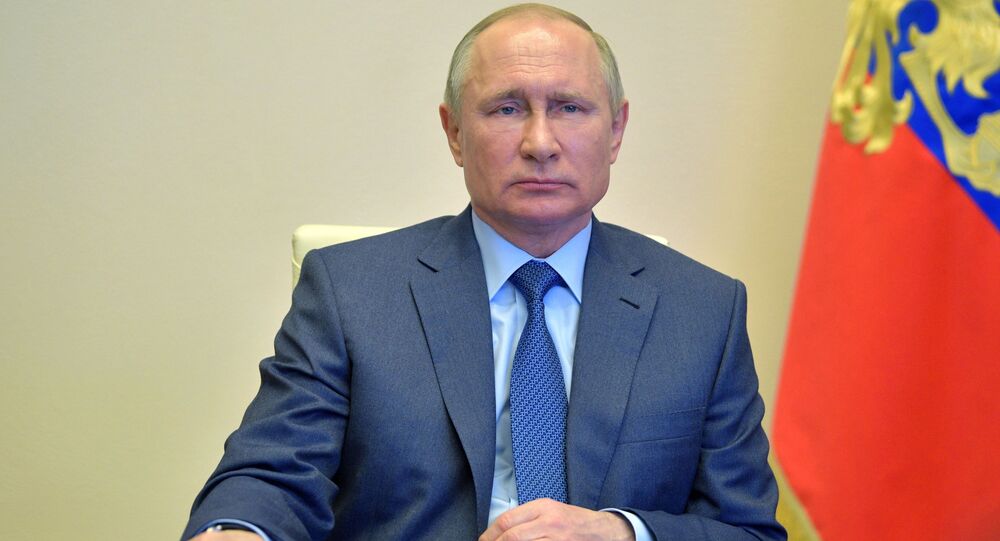 The peak of new COVID-19 infections in Russia is still ahead, but authorities and the medical services have helped slow the virus spread, President Vladimir Putin has announced.

"As experts are saying, the peace of the rate of infection is yet to come, and right now we need to do everything possible to smooth this peak, to shorten the period through the so-called plateau period, when the largest number of new infections is recorded," Putin said, speaking at a meeting with officials regarding the state's efforts to battle the novel coronavirus on Monday.

"The situation remains difficult, and unfortunately, the spread of the epidemic continues. The number of citizens that have been infected is growing," Putin added. The president also observed that growth has been observed not only in Moscow, which has the largest number of cases, but in other regions as well.

"Thanks to preventative measures, we've managed to slow the process down, but, unfortunately, infections, even if we're talking about small numbers of cases, have been recorded in all 85 regions of the Russian Federation," Putin said. In this connection, the president suggested the need to highlight regions which have proven to have taken the most effective measures in the battle against the virus and to replicate their methods in other regions as needed. In this area, the president highlighted the effective work being done by Kemerovo region governor Sergei Tsivilev.

The president emphasized that the coronavirus is an infectious disease that can target anyone, and that it's now critically important for the healthcare system to have effective measures in place to help people, including patients suffering from other chronic diseases. Particular care is required for pregnant women and children, including newborn children, he said.

Putin also commented on Russia's cooperation with other nations in the coronavirus fight, revealing for example, that Russia has concluded a contract with the United States on the sale of air flow sensors used in Russian-made artificial ventilators.

He added that Russia's recent assistance to Italy, one of the countries struck hardest by the crisis, is not a one-sided relationship, with Russia purchasing pressure sensors from Italy for ventilator equipment.

"As I've said, our cooperation is quite extensive here with many colleagues. As far as antiseptics go, we get by without the need for imports, but our practical cooperation with some partners in Italy is well-known. We've sent our military doctors to this country, we've sent equipment there...But I'd like to say in this connection that this isn't just a one-way game, it's not a one-way road. We buy pressure sensors from Italy without which it would be impossible to produce mechanical ventilation devices in Russia. And this cooperation is growing," Putin said.

Putin noted that Russian industry is on track to producing over 100,000 protective suits per day for health workers, along with first 3.5 million masks, and then 7 million masks per day for ordinary citizens. In the meantime, Putin said, China has provided the country with as many as 150 million medical masks to complement local stocks.

Enormous Responsibility Rests on the Shoulders of Vaccine Creators

Commenting on Russian scientists' ongoing efforts toward the creation of a vaccine for the new coronavirus, Putin stressed that a "enormous responsibility" lies on the shoulders of developers.

"I understand well and am aware about the difficult, painstaking scientific research that's being conducted in this direction. It's difficult to make guesses here [regarding time frames] because the vaccine should not only be received, but its effectiveness and safety must also be proven," Putin said. "In this regard, I understand the enormous responsibility that lies with developers for the results of their work. However, I would like you to express your views on the possible time frame for the development of the vaccine. We must know this in order to prepare industrial capacities in advance to quickly start production of the vaccine in necessary amounts," he added. Putin also asked whether any additional financial or organizational assistance was required by researcher, promising to provide such help "immediately" if necessary.

According to Putin, it would only be logical to vaccinate medical workers first once the vaccine becomes available.

Russian scientists began working on a possible vaccine for COVID-19 last month, immediately after researchers from the Smorodintsev Research Institute of Influenza successfully sequenced the virus's whole genome. In addition to work on a vaccine, researchers from Novosibirsk's science city have created highly accurate test kits, while Russian Academy of Sciences scientists have discovered three separate antiviral drugs which may be suitable for treating the virus.

As of Monday, Russia has a total of 47,121 confirmed COVID-19 cases, including 405 fatalities. Russian authorities joined much of the rest of the world last month in introducing a series of measures to try to slow the virus's transmission, closing down air, sea and rail travel with other countries and setting up self-quarantine restrictions in cities across much of the country. Late last week, Moscow mayor Sergei Sobyanin signed a decree obliging Muscovites to obtain special digital passes to enable them to make use of public and private transport, with the measure ostensibly aimed at reducing unnecessary travel and thus the risk of transmission.