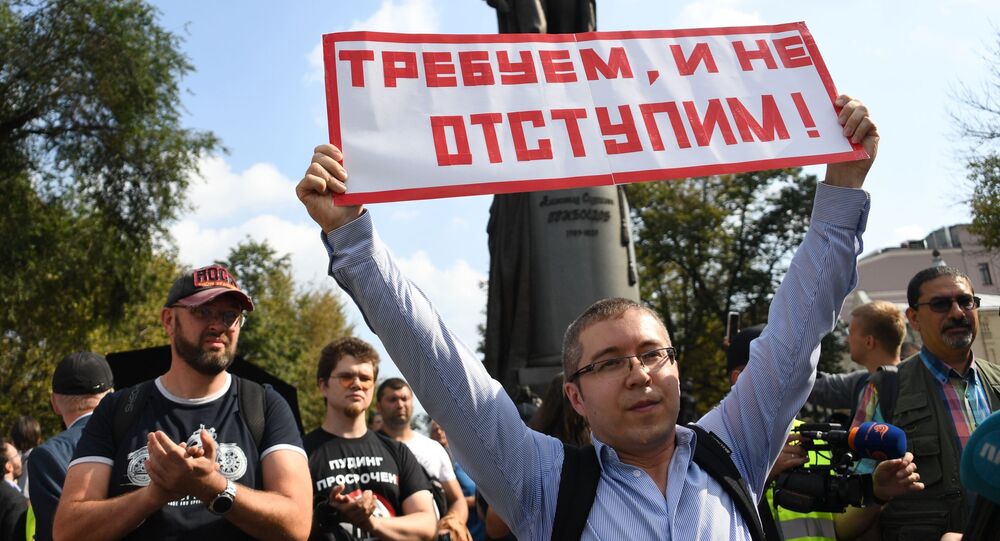 Prior to his talks with French President Emmanuel Macron, Russian President Vladimir Putin commented on the demonstration in Moscow, saying that citizens had the right to peaceful protest but that laws must not be broken.

Some 750 people took part in an unauthorised rally in Moscow on Saturday, the press-service of the Moscow department of the Interior Ministry said.

On Friday, Moscow police asked organisers of the unauthorised rally to abandon their plans and asked people not to attend the demonstration.

The police reminded them that participation in an unauthorised rally is punishable by law.

Earlier in the month, the Moscow government authorised two rallies with 100,000 people registered to attend. According to police figures, about 20,000 people attended the rallies, while the organisers claimed that some 50,000 protesters attended the events.

A wave of unauthorised protests in Moscow began in mid-July after the authorities barred opposition figures from participating in the September 8 election after they failed to gather a sufficient number of signatures of support.

Hundreds of people were detained by police as a result of the rallies. Though most of the arrested were later released, some of the organisers of the protest are to be detained until late September.

Earlier in the month, the Moscow City Court ruled to allow one opposition candidate, Sergei Mitrokhin, to take part in the upcoming vote.

Commenting on the demonstrations, Russian President Vladimir Putin said that citizens had the right to peaceful protests, and the authorities must abide by this right, but he added that laws can't be broken and nobody was entitled to resort to violence.