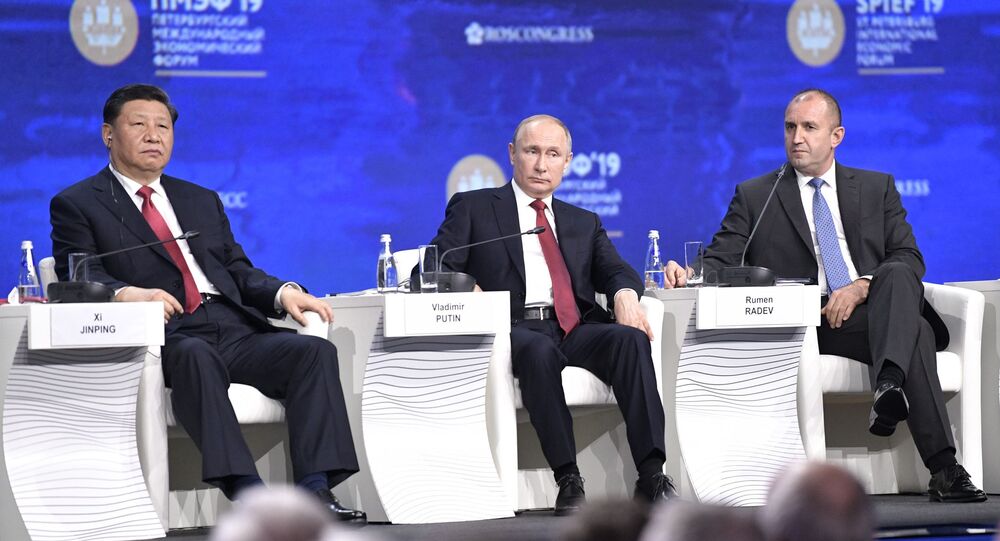 The 2019 St. Petersburg International Economic Forum (SPIEF) has attracted thousands of companies, businessmen, and officials from around the world to discuss the global economy and Russia's place in it.

The 2019 SPIEF is wrapping up on 8 June, having drawn an impressive 19,000 visitors from 145 countries and resulting in a record high number of deals being struck on the side-lines of the venue. According to one of the SPIEF’s organisers, adviser to the Russian president Anton Kobyakov, around 1,300 foreign and 2,500 Russian companies attended the forum.

The Chinese delegation to the economic forum was the biggest this year, numbering some 1,072 participants, while the second largest delegation came from the US, despite the ongoing tensions in the country's relations with Russia. Among other major delegations were also France, Germany, Switzerland, the UK, and Japan.

© Sputnik / Alexej Danichev
SPIEF: ‘Overarching Topic for Companies Is the Question of US Sanctions’ – Frank Schauff

Concerns regarding stagnating global trade and economic development were one of the key topics at this year's SPIEF. Russian President Vladimir Putin noted in his speech on the second day of the forum that the existing model of global trade has stopped being a driving force for the world's economies.

He stressed that this has occurred because countries that benefited from the model for decades have now resorted to "unfair" non-market practices in a bid to keep their dominant positions, which have begun to slip amid competition from other states. Putin specifically slammed the practice of waging trade wars as a means to secure a commanding position in the world.

The Russian president also revealed Moscow's position on the ongoing trade war between China and the US, saying that it is akin to that of a "monkey" from a Chinese proverb.

"When tigers are fighting in the valley, a smart monkey is watching from afar awaiting the outcome", Putin quoted.

Still, the Russian president added that unlike the monkey from the saying, Moscow is calling on the "tigers" to stop fighting and start talking, stressing that Russia stands for "fair and democratic" principles in global economic ties.

The Russian head of state also slammed other malign US practices such as extending the country's domestic laws to the rest of the world. Putin noted that this could transform the globalisation trend "into a parody of itself" and result in a "fragmentation of the global economic space" and an implementation of policies of "unhindered economic egoism". The latter, in the president's opinion, could lead to "endless conflicts and wars, and not necessarily trade ones".

Vladimir Putin separately slammed the US' use of the dollar as a pressure mechanism against the rest of the world. He argued that because of this, the currency is losing trust globally, going on to say that its status should be reconsidered.

Sanctions and Start of 'Technological War'

The Russian president also touched upon the pressing issue of the US crackdown on Huawei. He accused Washington of trying to "unceremoniously" push the Chinese tech giant out of the global market.

Putin believes that this pressure campaign may be a sign of what some people call the start of a “technological war”. According to the Russian president, some countries are willing to monopolise technologies, separating the rest of the world from them, thereby creating a new source for instability.

In a statement on the first day of the SPIEF, Putin slammed the US sanctions against Venezuela, noting that no country has the right to interfere in the domestic affairs of another in such a way. The Russian president argued that the economic sanctions have affected millions of "common people" the most and not the government that the US is seeking to undermine.

Putin separately addressed the issue of mutual sanctions between Russia and the EU and assured that Moscow is ready to lift the sanctions once Brussels does the same.

As part of the SPIEF, Russian and Chinese energy firms participated in the Second Russian-Chinese Energy Business Forum. There, they stressed the importance of energy trade between the two states and vowed to intensify cooperation, despite growing pressure from Western nations, which Rosneft CEO Igor Sechin called a sign of "weakness" and an "attempt to gain a unilateral advantage by diminishing competition".

Over the the course of the SPIEF, around 650 deals valued at a total of $48 billion were struck, adviser to the Russian president Anton Kobyakov revealed. $1.5 billion alone will be invested in the Russian city of St. Petersburg, which hosted the event. Huawei has revealed plans for major collaboration with Russian companies, namely in the sphere of 5G network technologies.

In a bid to further boost investments in Russia, Russian Economic Development Minister Maxim Oreshkin announced plans to review the threshold for permitted foreign shares in certain spheres of business. Moscow is now eying lifting restrictions on foreign investors, who are currently limited to a certain percentage of shares in some businesses unless an investor receives special permission from the government.