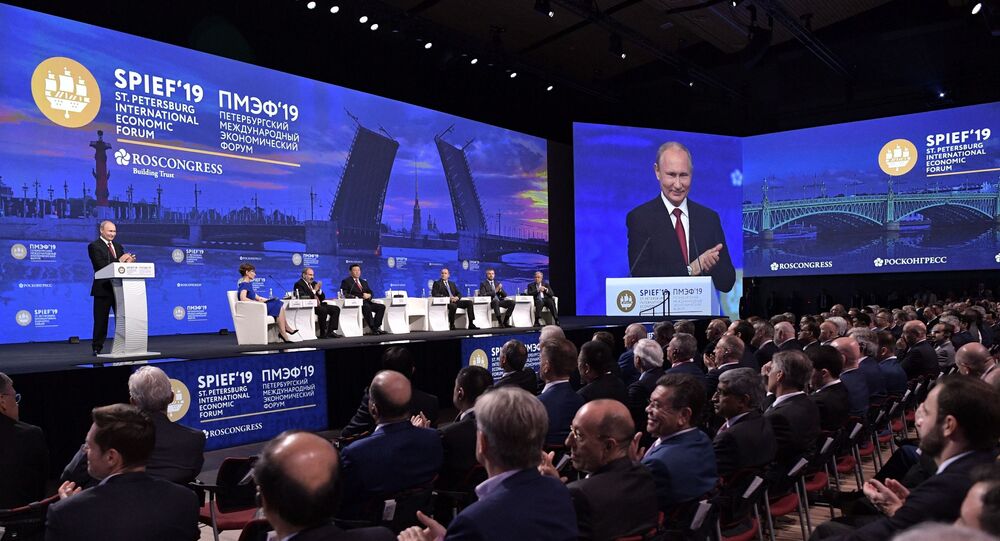 The second day of the St. Petersburg International Economic Forum took place on Friday, resulting in numerous contracts and agreements. Here are some of the noteworthy highlights, international contracts, and statements made on the last day of the SPIEF.

The leaders of Russia and China met with participants of the International Economic Forum during the plenary session on Friday. The meeting was also attended by President of Bulgaria Rumen Radev, Prime Minister of Armenia Nikol Pashinyan, Prime Minister of Slovakia Peter Pellegrini and UN Secretary-General Antonio Guterres.

After the meeting, Putin promised to carefully analyze discussions conducted during the forum, in order to improve conditions for foreign businesses in Russia.

"I would like to assure you that we will carefully analyze these discussions and our meeting today, as is usual practice, in order to make necessary improvements for the purpose of improving the conditions of your work here in Russia," the President said.

© REUTERS / Edgar Su
Huawei Reveals Cooperation Plans With Russia at SPIEF - RDIF
Russian Railways has signed an agreement with the Munich-based tech giant Siemens to buy 13 high-speed Velaro trains (known in Russia as "Sapsans"). The contract is worth about 513,5 million Euros ($582,39 million).

"We have good cooperation in the military-technical sphere, and we have some agreements. I think, our relations in this field are developing steadily," Pashinyan said about his talks with Putin.

He added that Russian Iskander ballistic missile complexes were not part of negotiations. Pashinyan said Armenia had "enough" of these weapons already.

"But we do hope to get something else. Not a little something," he said.

© Sputnik / Evgeny Biyatov
Golden Aurus, Educational Robots and VR: Most Unusual Stands at the SPIEF
The Deputy Foreign Minister on the Middle East and Africa Mikhail Bogdanov said that Russia will send 30 military specialists to the Central African Republic to take part in the UN peacekeeping mission before the end of July.

Putin ordered the relocation of a group of Russian servicemen to CAR on 15 April. According to his order, the servicemen will be funded by a UN budget. In May, Russia announced it would send a shipment of infantry weapons to CAR for free.

Russia and Cuba signed a bilateral agreement on the renovation of Cuban railways. The contract is reportedly worth almost $1 billion, according to Deputy Prime Minister of Russia Yuri Borisov.

"I have information that this intergovernmental agreement has been signed today. The project's cost is slightly less than $1 billion," he said.

According to the Deputy Prime Minister, the renovation will increase the Cuban shipping capacity threefold and will boost the island nation's economy.

"WSJ information that we had an office of 1,000 people and we now cut back now is fake news. We never had an office like that. Our office [in Venezuela] has remained at just 10 people for years. Interestingly, even Trump commented on this news," said Chemezov.

He also said that Russia will complete construction of a helicopter maintenance centre in Venezuela by 2020.

"I think we need one more year, we will finish it in 2020," he said. "The training centre is already finished, we recently signed an agreement and we already train Venezuelan pilots."