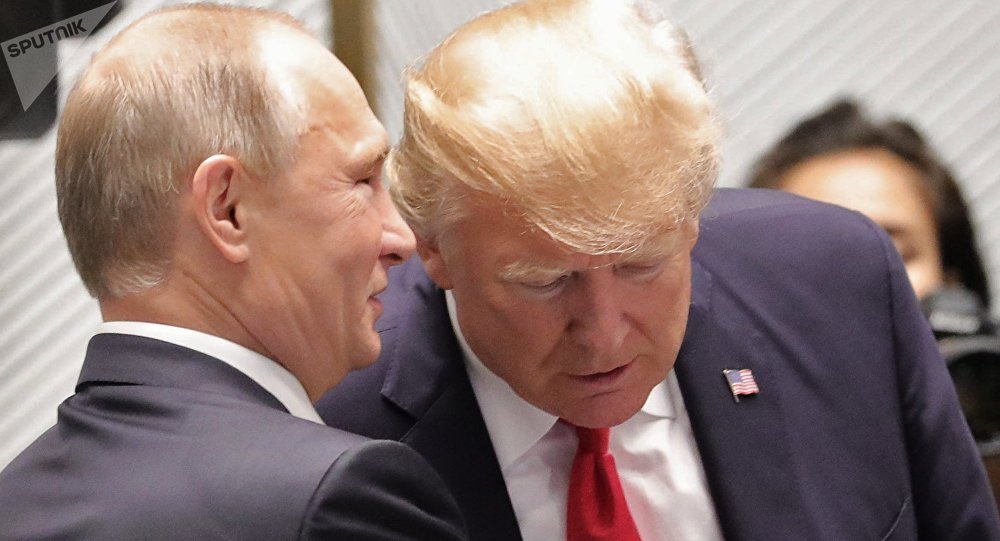 Donald Trump's antagonists have raised the alarm over the upcoming Helsinki meeting between the American and Russian presidents, comparing Trump to an "infant child" and predicting an easy victory for Vladimir Putin. Meanwhile, Russian policymakers are expressing cautious hope that US-Russia relations could finally improve.

The upcoming meeting between Russian President Vladimir Putin and his American counterpart Donald Trump on July 16 in Helsinki has already made a splash in the media.

Trump's critics jumped at the opportunity to cast doubt on the potential outcome of the summit, predicting that Putin might "outwit" the US president.

"If he is sitting across the table from Vladimir Putin, who is a highly skilled manipulator and negotiator, the chances are things could go off the rails," CNN national security analyst Samantha Vinograd presumed, commenting on Trump's apparent plan to hold one-on-one talks with Putin ahead of the summit.

© Sputnik / Michail Klimentjew
Wall Street Analyst Explains How Trump-Putin Summit May Ease Tensions in Europe
The American biweekly New York Magazine claimed that "Putin holds all the cards" in the expected summit, suggesting that the US president will easily fall under the Russian leader's spell. The media outlet recalled that earlier Trump had congratulated Vladimir Putin on his re-election "against the advice of literally everyone" and highlighted that the two "even spent an hour alone together" on the sidelines of the 2017 G20 meeting.

Speaking to CNN anchor Anderson Cooper, retired US Army Lt. Col. Ralph Peters even went so far as to compare Putin to a "Russian bear" and Trump to an "infant child" while citing lines from A. E. Housman's poem "Infant Innocence."

"If John Bolton can do one service for his country… he can to prevent a one-on-one Putin meeting behind closed doors," Peters emphasized.

"The Russian bear is huge and wild. It has devoured the infant child. The infant child is not aware. It has been eaten by the bear." — Lt. Col. Ralph Peters channels A. E. Housman, using the poet's "Infant Innocence" to detail the Putin-Trump relationship https://t.co/cLMzoqgU33 pic.twitter.com/zYjx2YtFyQ

​Former US Ambassador to Russia Michael McFaul has put some skin in the game by tweeting that the US President had already "sided" with his Russian counterpart and that Trump "continues to hint at concessions he might offer Putin."

And remember, in this tweet, the President of the United States if America is siding with Putin and is denying the findings of his own Intelligence Community. A shocking moment in American history. https://t.co/ig6emsk2Zx

Trump continues to hint at concessions he might offer Putin. Appeasement (almost always a bad idea) usually occurs in response to some threat, but Putin (to the best of my knowledge!) is not preparing to invade Europe. So what is the strategy here? I just dont get it.

​As for Anders Aslund, a Swedish economist and a Senior Fellow at the Atlantic Council, he believes that Trump isn't alone in having been enchanted by Vladimir Putin: "After decades as a hardliner on Russia, Bolton melts when he meets the Russian President. Not very impressive," Aslund tweeted.

After decades as a hardliner on Russia, Bolton melts when he meets the Russian president. Not very impressive. https://t.co/KdjAS6Yu2w

​The British newspaper The Sunday Times joined the chorus of alarmists expressing fears that President Trump may "undermine NATO by striking a 'peace deal' with President Putin." According to the newspaper, the US president "may be persuaded to downgrade US military commitments in Europe," thus exposing EU members states to a security "threat" posed by Russia.

© AFP 2019 / IAN LANGSTON
Why Trump's Idea to 'Fix' Global Trade System May Result in US Isolation
The New Yorker has adopted a more moderate stance, writing that Russia is just seeking to improve bilateral relations which have reached an all-time low over the past few months: "For months, Russia has not had much of a policy for dealing with the United States other than hoping that things do not get worse-whether in terms of new sanctions or a direct military confrontation in Syria-and waiting for a summit to materialize."

The media outlet suggested that the June 12 Singapore Summit between Donald Trump and North Korean leader Kim Jong-un was "instructive" for the Russians, instilling hope that the US President is a pragmatic negotiator.

Meanwhile, Russian analysts and policymakers have expressed cautious optimism regarding the very fact of the Trump-Putin summit, at the same time adding that they do not expect any breakthroughs.

Speaking to reporters in Madrid, Russian Deputy Foreign Minister Oleg Syromolotov suggested that the fight against terrorists is likely to come into focus at the Helsinki negotiations. For his part, Russia's Ambassador to the United States Anatoly Antonov expressed hope that the presidents might start a discussion on the Strategic Arms Reduction Treaty (New START) and Intermediate-Range Nuclear Forces Treaty (INF Treaty) among other issues and establish a joint cybersecurity group.

"I am sure that it is impossible to remove all obstacles out of the way of our mutual cooperation, but it goes without saying that there will be progress regarding bilateral relations as well as regional and global problems," Antonov told RT on July 3.