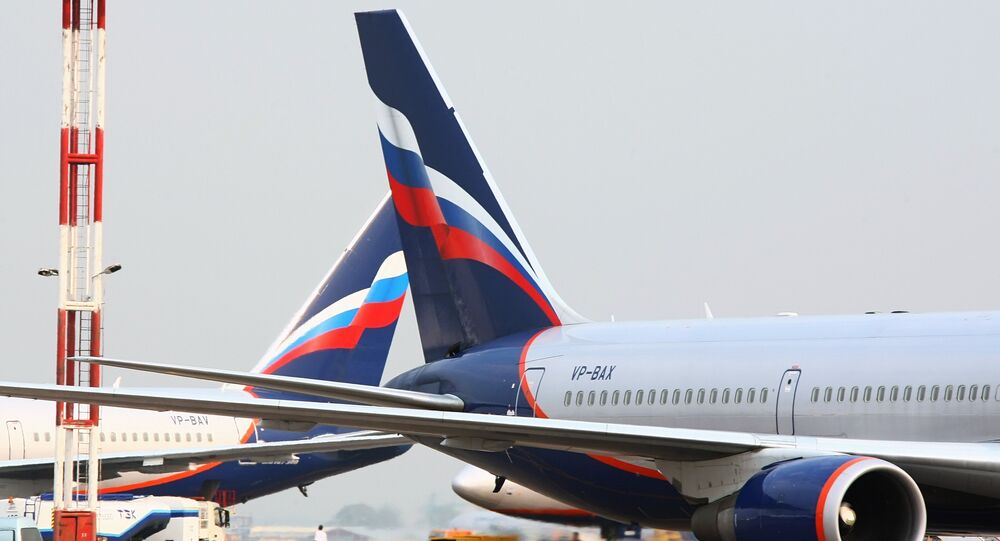 MOSCOW (Sputnik) - British authorities conducted a surprise search on Friday of Russia’s Aeroflot airliner at London’s Heathrow Airport, in what Russian diplomats said was another provocation in the deepening row between the two nations.

The search was reported on Friday afternoon. The Airbus returned to Sheremetyevo Airport in Moscow in the early hours of Saturday after completing a round trip.

"Today, we have witnessed another blatant provocation by the British authorities," the Russian Embassy in London said in a statement. "This kind of event is extraordinary."

Confusion arose over who did the search. Media reports suggested that UK police were involved, but the London’s Metropolitan Police denied a role on Twitter. Russian diplomatic mission later said the plane had been boarded by border force and customs officers, who ordered the crew off in violation of existing rules.

After long talks conducted by an Embassy officer the captain of the plane was allowed to stay, according to the mission.

© REUTERS / Stefan Wermuth/File Photo
'Another Provocation': Russian Plane Allegedly Searched at London Airport
Russia's flagship air carrier Aeroflot described the search as a violation of "the world practice of carrying out such inspections." It said UK authorities had forced the crew off and isolated the captain in the pilot's cabin.

"After the search was over, the British officers refused to provide any written document that would specify the reasons for their actions, their legal foundation and their outcome," the Russian Embassy said.

The Embassy tried to contact the UK Foreign Office to clarify the incident and "inappropriate behavior" of British officials but without success. It then sent a diplomatic note demanding explanations.

The plane’s pilot, who spoke to Russian media shortly after landing in Moscow on Saturday morning, said British officers were looking for illegal items.

"Several people turned up with a dog… and told us they needed to search the aircraft for items prohibited for carriage by air," Vitaly Mitrofanov told Rossiya 24 television channel.

The pilot said he stayed in the cabin while the officers were on board and was unaware of what they were doing most of the time. This was against common rules that require crew to accompany inspectors.

"I wasn’t allowed to see what they were doing. Under our rules, an inspector is to be accompanied by crew members," Mitrofanov said. "We agreed to this after consulting the consul and air security so that we could proceed with the flight."

The Russian Embassy blamed the incident on UK’s overall hostility toward Russia following a spat over a former spy’s poisoning.

"We will carefully analyse what has happened. At this moment, we have no other explanation but that the incident at Heathrow is in one way or another connected with the hostile policy that the UK government is conducting with regard to Russia," the statement read.

© REUTERS / Peter Nicholls
'International Provocation': Moscow Slams UK's Actions Against Russia
Russian Foreign Ministry spokeswoman Maria Zakharova suggested that the search was ordered by UK authorities to cover up for their lack of progress in the poisoning probe. Russia has demanded proof of its guilt in a murder attempt at Sergei Skripal and his daughter.

"We cannot rule out this being another provocation by the UK authorities that they need in order to save, by all means, their truly tarnished reputation in connection to the so-called Skripal case," Zakharova said.

Ties between Russia and the United Kingdom soured after a former Russian spy and his daughter were found slumped on a park bench in Salisbury on March 4 with symptoms of poisoning. London blamed Moscow for the suspected nerve gas attack and expelled 23 Russian diplomats. Russia denied the claims and reciprocated the expulsion earlier this week.