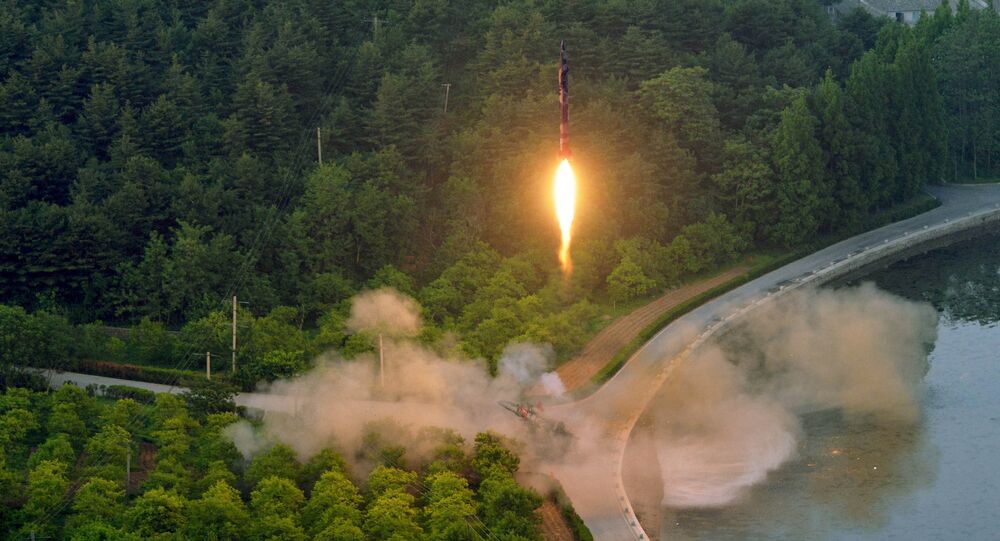 Last week, US Director of National Intelligence Daniel Coats admitted that North Korea's nuclear and missile testing efforts, while dangerous, were not irrational. Russian political observers say it's about time that Washington recognizes this basic fact.

Speaking at a security forum in Aspen, Colorado last week, Daniel Coats said that while North Korean leader Kim Jong-un's behavior was concerning, his decisions are not entirely unreasonable, since he is concerned with his regime's survival.

"He's demonstrated behavior publically that raises questions about who he is and how he thinks and how he acts and how his behavior is," Coats said. "Our assessment has resulted in the fact that, well, he's a very unusual type of person, but he's not crazy. There's some rationale backing his actions which are survival," he added.

© REUTERS / KCNA
US Intel Concludes N. Korea Leader Not Crazy, Actions Driven by Regime Survival
According to the official, Pyongyang still has a way to go toward joining the nuclear club. At the same time, Coats emphasized that North Korea is gradually becoming a "real threat" to the United States.

At the same forum, former CIA and the NSA director Michael Hayden suggested that North Korea should be recognized as a nuclear power, in exchange for restrictions regarding the number and type of nuclear weapons it is allowed to have.  Otherwise, he warned, Pyongyang will soon create missiles capable of reaching the US West Coast.

According to Hayden, it would be "illogical" for Pyongyang to abandon their nuclear weapons, since they have become a "matter of regime survival." Furthermore, the official stressed that North Korea's leaders are always mindful of the fate that was faced by Iraqi and Libyan leaders Saddam Hussein and Muammar Gaddafi, and believe that the same thing will happen to them if they renounce their nuclear weapons.

Commenting on Hayden's remarks, which marked a stark contrast to the kinds of statements presently coming out of the White House, US politics specialist Vladimir Mozhegov told Russia's Svobodnaya Pressa online newspaper that Hayden has always been someone whose views should be taken seriously.

"Hayden, of course, is a serious man," Mozhegov said. "For many years, he headed the NSA, then the CIA, and during crucial years for the United States – during September 11 and the Iraq War. He has always had an independent opinion. Forums [like the one in Aspen] are held in order to reflect on the most acute topics. Therefore, of course, the opinions expressed there are listened to. Still, this is still the private opinion of a private person."

With regard to Hayden's suggestion that the US may 'recognize' Pyongyang's nuclear status, the observer suggested that this was an entirely logical response to an existing threat. "What else can they do? Nuclear weapons are spreading. What is more dangerous – to legitimize North Korean nuclear weapons and Pyongyang itself, or to continue bullying this country, all the while expecting something unpredictable in response?"

"North Korea survives [as a country] only so long as it has the atomic bomb," Mozhegov stressed. "Otherwise, it would have been wiped out a long time ago, as happened with the Arab regimes. Everyone understands this perfectly well. Hayden…even utters it aloud. I don't think there are any conditions out there which can convince Pyongyang to part with its missiles and nuclear weapons."

The bigger problem, according to Mozhegov, is that the ideology of the US neoconservatives compels them, in the candid words of neocon writer Michael Ledeen, to "pick up some small crappy little country and throw it against the wall, just to show the world we mean business" about once a decade or so.

© Sputnik / Iliya Pitalev
Accident Waiting to Happen? US Military Sees Signs of North Korea Preparing for New Missile Test
But in the case of a nuclear-armed North Korea, doing so would be a very risky proposition, Mozhegov noted. "That is, on the one hand, enough time has passed since the Iraq war to 'pick up another crappy little country', but on the other, it is too dangerous to play such games with Kim Jong-un."

Furthermore, there is some hope, Mozhegov said, because "President Trump generally does not like the neocons' game of American messianism…He is a supporter of realpolitik. For him, the main thing is getting a 'good deal'. Therefore, everything depends on which political principle wins out" in Washington.

For his part, Igor Shatrov, deputy director of the National Institute of the Development of Modern Ideology, recalled that when it comes to nuclear weapons, only five states – Russia, the US, the UK, France and China are recognized as such under the 1968 Non-Proliferation Treaty. Other powers, including India, Pakistan and North Korea have nuclear weapons, and Israel is suspected of having them. However, as non-signatories to the NPT, none of them are actually in violation of the treaty.

However, when it comes to North Korea, Shatrov suggested that 'double standards' seem to apply. This touches on Russia's position as well, he said, "because as a member of the Security Council, Russia does not veto all the resolutions taken against North Korea."

"Still, credit should be given where credit is due," he stressed. "Russia," Shatrov noted, "occupies a constructive position. Our country does not support those resolutions which have as their single goal the strangulation of the North Korean economy. It is clear that Pyongyang, under overt pressure from the US, cannot find any other ways to ensure its national security. For the US, nuclear weapons remain the only valid argument."

© Sputnik / Iliya Pitalev
Moscow Opposes New UNSC Resolution Seeking to Suffocate North Korea
"It is also obvious that it is high time to look for other ways to solve the North Korean problem, apart from the embargo," the observer added. This is especially important given that the risks of localized nuclear conflict continue to grow, while relations between Russia and Western powers are highly strained. In this sense, Hayden's remarks may be interpreted as a sign that there are still officials in the US military and intelligence communities "who are not ready for suicidal actions," Shatrov said.

In any case, the observer noted that even though Pyongyang does not expect international recognition of its nuclear status, it's not too concerned about getting it either, since such recognition wouldn't really change much.

That said, according to Shatrov, North Korea probably "would agree to join the NPT, if it were formally included in the list of countries that have the right to possess nuclear weapons. But they would never agree to the deployment of US nuclear weapons in South Korea, something that Washington is looking to find a pretext for."

N. Korea Policy Recommendations Made by Russia, China Only Way to Avoid Disaster