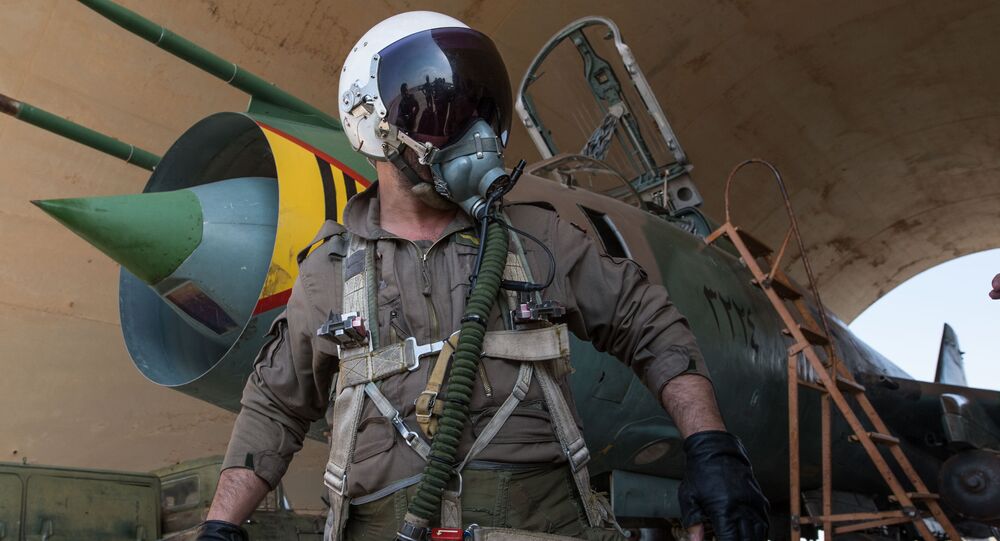 Syrian Air Incident: How Trump's 'Non-Interference' Talk Turned Out to Be Cheap

Russia should use tougher language with Washington following the air incident in southern Raqqa, Colonel General Leonid Ivashov told RIA Novosti, adding that it seems that the US-led coalition deliberately gets in the way of the Syrian Arab Army's efforts to defeat Daesh (ISIS/ISIL).

Moscow may adopt a tougher position in Russo-American dialogue on Syria after a Syrian army Su-22 was shot down by the US-led coalition over northern Syria, Colonel General Leonid Ivashov, president of the Academy of Geopolitical Problems, believes.

"Probably, we [Russia] need to talk tougher with the Americans," Ivashov told RIA Novosti. "These agreements on the coordination of military operations should be turned into reality. They [Washington] do not react to [our] diplomatic protests and continue to behave impudently, not entering into any commitments and acting only in their own interests."

The Syrian Arab Army (SAA) specified that its aircraft was shot down while conducting a counterterrorism mission against Daesh (ISIS/ISIL).

For its part, the Pentagon confirmed that it hit the warplane of the Syrian Air Force, claiming that the Su-22 was attacking positions held by the US-backed Syrian Democratic Forces (SDF).

The US-led coalition qualified the attack as "collective self-defense" and reported that it contacted the Russian military to de-escalate the situation after the strike.

The incident has become the fourth time the US-led coalition has attacked the SAA and pro-government forces in Syria.

The Russian Defense Ministry denounced the "cynical" US airstrike against the Syrian government forces, adding that it could be considered an "act of aggression."

"The repeated hostilities of US aviation against the legitimate armed forces of a UN member state under the guise of 'combating terrorism' are a gross violation of international law and de facto a military aggression against the Syrian Arab Republic," the ministry's statement said.

Commenting on the strike Ivashov pointed out that US President Donald Trump de facto continues his predecessor Barack Obama's policy in Syria.

"He talked [a lot] about non-interference, then he gave the Central Intelligence Agency and the Pentagon the task of restoring America's control over the entire Middle East, and then he voiced the need to overthrow the president of the Syrian Arab Republic, Bashar al-Assad," Ivashov emphasized, adding that it has become clear that Washington's Syria policy will bring no good to the region.

© REUTERS / Rodi Said
US Coalition's Downing of Syrian Jet Shows Who's 'Really Fighting Daesh'
To complicate matters further, it appears that the US-led coalition is deliberately throwing sand in the SAA's gears to hinder Damascus's progress against Daesh.

Ivashov stressed that it was the US who contributed to the emergence of Islamist terror groups in the Middle Eastern region due to its irresponsible foreign policies.

According to the expert, Washington turned a blind eye to the rise of the "Islamic State" — later known as Daesh — back in the 2000s. Today, the US appears to have become an indirect facilitator of the terrorist group in Syria, he added.

"The US does not wage any real war on terror in the region," Ivashov underscored.

Russian Senator Viktor Ozerov, chairman of the Council of the Federation Committee on Defense and Security, shares Ivashov's concerns regarding the US-led coalition's strikes on Syrian government forces.

"The US [coalition's] actions are lawless and criminal, this behavior can endanger not only our [Russian] aircraft but, more importantly, the life of our servicemen [on the ground]," Ozerov told RIA Novosti, referring to the recent air incident in southern Raqqa.

© Sputnik / Mikhail Voskresenskiy
Syrian Army Frees Ancient City of Sergiopolis Near Raqqa From Daesh
"We will take all measures to ensure the security of our aircraft during their combat and other tasks by all air defense and aviation assets, both from the ground and from the air, including the S-300 and S-400," the Russian senator emphasized.

Meanwhile, the Russian Defense Ministry announced Monday that it halts all interactions with the US within the framework on the memorandum of incident prevention in Syrian skies.

Furthermore, Russian missile defense systems will intercept any aircraft in the area of operations of the Russian Aerospace Forces in Syria.

"In areas where Russian aviation is conducting combat missions in the Syrian skies, any flying objects, including jets and unmanned aerial vehicles of the international coalition discovered west of the Euphrates River will be followed by Russian air and ground defenses as air targets," the Russian Defense Ministry's statement said.

The ministry slammed the US-led coalition for not using the deconfliction channel with Russia to prevent the incident in southern Raqqa.

"We consider such actions of the US command as an intentional violation of its obligations in the framework of the memo on avoiding incidents and the safety of aviation flights during operations in Syria signed on October 20, 2015," the statement read.

Raging Battle: Why ‘Liberation of Raqqa Could Take Months’