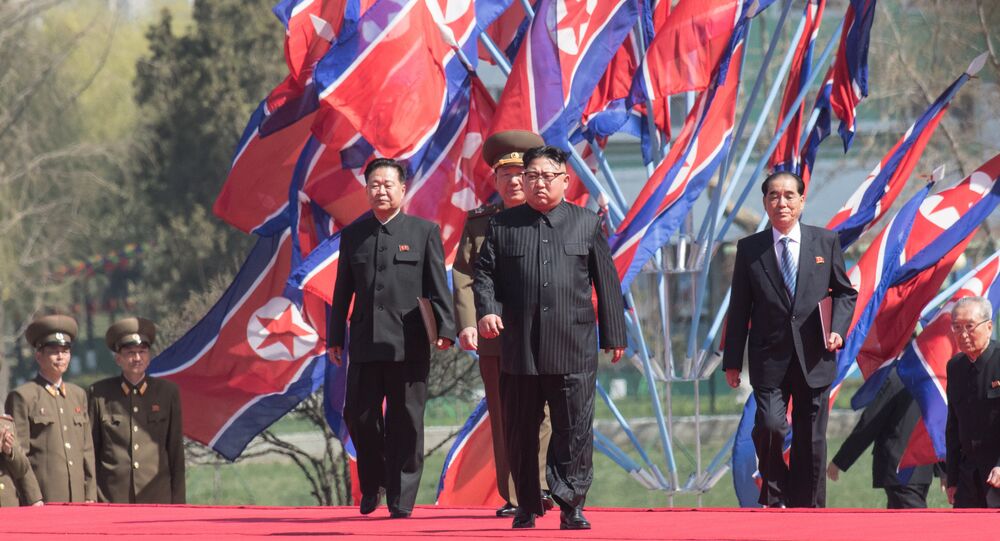 Pyongyang would give Washington the upper hand if it refuses to hold talks with US President Donald Trump, political analyst and historian Areg Galstyan told Radio Sputnik. Earlier this week, Trump said that he would meet North Korean leader Kim Jong-un under certain circumstances.

"The North Korean issue is one of priority foreign policy tasks for the United States. This is why Trump's wish to find common ground with North Korea is quite reasonable. He has made this statement to see Pyongyang's reaction. If Kim Jong-un refuses to hold negotiations, he would untie Washington's hands, giving the US the opportunity to resolve the issue through other means. In such a case, no one would lambast the US for not trying to find a diplomatic solution," the analyst explained.

Washington will benefit even if Pyongyang refrains from responding to Trump's comments or takes the White House up on its offer, Galstyan said.

"If Kim Jong-un appears to be weak by saying that he is willing to negotiate, this could spark a political crisis in North Korea. This also suits the US," he said.

© Photo : Pixabay
Washington Is the Real Threat to Peace on the Korean Peninsula
Earlier this week, Trump said that he was ready to hold talks with Kim Jong-un if it is "appropriate for me," adding that he "would be honored to do it." White House Press Secretary Sean Spicer later clarified that the conditions for such a meeting "were not there yet," saying that Pyongyang needed to tone down its bellicose rhetoric and refrain from provocative actions.

These remarks came at a time of escalating tensions between the United States and North Korea. Washington has recently adopted a hardline stance on Pyongyang, repeatedly saying that the United States could resolve the North Korean issue on its own if other nations, primarily China, do not make an effort.

The war of words between the United States and North Korea has escalated after Pyongyang stepped up its military efforts, carrying out a series of missile tests and pledging to conduct its sixth nuclear test. As a result, Washington officially ended its policy of "strategic patience" toward the reclusive nation, saying that all options are on the table.

© AP Photo / Susan Walsh
Trump Says Will Not Draw 'Red Line' With North Korea Like Obama Did in Syria
In addition, the US Navy sent its Carl Vinson Strike Group to the Korean Peninsula, prompting many to question whether Washington could carry out an attack against Pyongyang. These concerns have also been fueled by the Pentagon's unexpected and unwarranted airstrike on a military base operated by the Syrian Arab Army.

However, President Trump has adopted a less assertive approach to North Korea in recent days. Last week, he limited his reaction to Pyongyang's failed missile test by tweeting that North Korea "disrespected the wishes of China." In addition, Trump described Kim Jong-un as "a pretty smart cookie" for holding on to power.