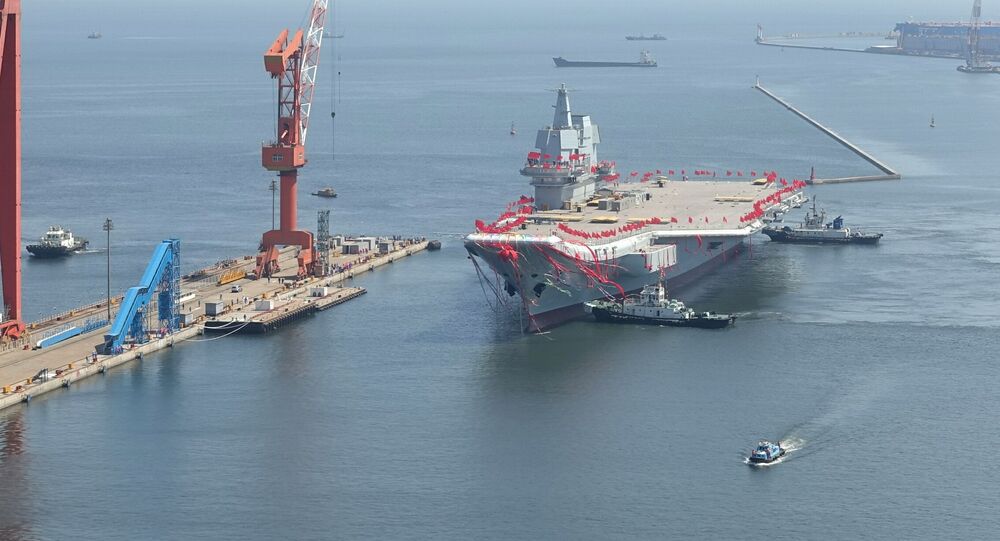 Following the launch of the Chinese Type 001 aircraft carrier, the question arises whether it marks the shift in the balance of power in the Asia-Pacific region. Although in the near future the US and China are likely to maintain the established status quo in the region, in the long run the situation may change, observers assume.

Beijing's launch of the Type 001A aircraft carrier from the Dalian shipyard of the China Shipbuilding Industry Corp. has become a national event. Meanwhile, observers wonder whether or not the People's Liberation Army Navy (PLAN) is going to shift the balance of power in the Asia-Pacific region.

"The Chinese fleet is the second to that of the US, in some respects, it is comparable to the Japanese one and surpasses all other fleets [in the region]," Andrei Frolov, Russian military expert and editor-in-chief of Arms Export, told Russian online newspaper Vzglyad.

He believes that the Chinese fleet surpasses even the Russian Pacific Fleet, "maybe with the exception of the submarine component."

© REUTERS / Stringer
China's New Carrier 'Just First Stage in Creation of Fleet of Supercarriers'
The new Chinese aircraft carrier is due to enter into service by 2020-2021. Its air group will reportedly consist of J-15 fighters (a Chinese copy of the Soviet Su-33 aircraft) or carrier-capable versions of the J-16 fighter jets, including special electronic-warfare aircraft J-16D. China is also developing carrier-borne "flying radars," sometimes referred to as the JZY-01.

Commenting on the historic launch, Russian media outlet Lenta.ru remarked that some observers noticed steel constructions near the dock, which prompted speculations on China preparing to build a third aircraft carrier.

The media outlet noted that although it's hard to compare the US Pacific Fleet and China's Navy in terms of the number of aircraft carriers and warplanes in their air groups, it is obvious that Beijing is determined to boost PLAN's military capabilities of its fleet in the region.

"Previously the Chinese fleet and long-range bomber missile carriers didn't command support from fighter jets at a distance of more than several hundred kilometers off the continental coast," the media outlet underscored, suggesting that the world may soon witness a naval race between Beijing and Washington in the Asia-Pacific region.

© REUTERS / Stringer
Homegrown Aircraft Carriers: Is China Seeking to Challenge US Naval Dominance?
It appears that the US has serious concerns about China beefing up its military presence in the Pacific. Donald Trump's election promise to raise the US Navy's fleet from a planned 308 to 350 ships and to add about 100 fighter planes reflects such concerns.

According to some observers, one of the main reasons for Washington's plans to boost its fleet is the need to maintain military predominance over China in the region.

"The US Navy is perhaps the greatest source of regional stability in Asia," then Republican nominee Donald Trump's aides Alexander Gray and Peter Navarro wrote for Foreign Policy on November 7, 2016.

"With the Chinese already outnumbering the US Navy in Pacific-based submarines and projected to have 415 warships and nearly 100 submarines by 2030, the mere initiation of the Trump naval program will reassure our allies that the United States remains committed in the long term to its traditional role as guarantor of the liberal order in Asia," Gray and Navarro said.

Still, Russian military expert Vasily Kashin believes that the two geopolitical players will largely maintain the established balance of power in the Asia-Pacific region in the next few years.

"Given the fact that the Chinese aircraft carrier will be completed and enter Navy service only by 2020, the balance of power in the Pacific region won't change in the near future," Russian military expert Vasily Kashin told Vzglyad.

© AP Photo / Stephen Shaver, Pool
Construction of New Chinese Destroyers Picks Up Pace
However, in the long term, having increased the number of warships, China is likely to "solve more diverse tasks in the adjacent seas of the Western Pacific to increase its chances in potential operations against Taiwan and in the South China Sea," the Russian expert believes.

He admitted that in comparison with the US naval fleet Chinese warships have lesser capabilities, but they are intended for another set of tasks:

"They won't be used for missions around the world, they are intended solely for operations in the seas adjacent to China," Kashin stressed.

Indeed, while commenting on the question of whether or not China is planning to establish new naval bases overseas spokesman for China's Ministry of National Defense (MND) Senior Colonel Yang Yujun remarked: "You just mentioned that naval bases should be built all over the world because China has aircraft carriers. I think you think too much."