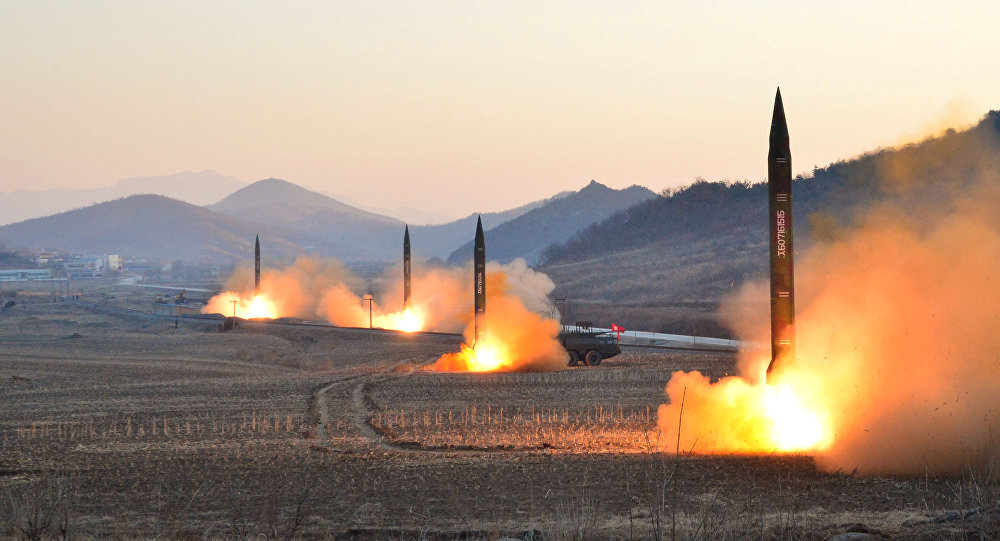 Seoul should become more actively engaged in the process of resolving the North Korean issue and "take matters into its own hands," Director of the International and Strategic Studies Division at Korea Institute for National Unification Shin Jong-Ho told Sputnik Korea.

"The fact that no progress has been made on determining the ways to resolve the North Korean nuclear issue during the talks between United States President Donald Trump and Chinese President Xi Jinping shows that the moment has come to search for innovative ways to turning North Korea into a nuclear-free state," he said.

© REUTERS / US Department of Defense
Who's Next: US Drops 'Mother of All Bombs' in Afghanistan Amid Rising Tensions With N Korea
Shin Jong-Ho noted that South Korea should come up with its own approach to dealing with the North Korean nuclear issue. The analyst referred to this strategy as the "Korean Solution," saying that it is particularly needed at a time when China could chose to play a greater part in the matter.

The "Korean Solution," in his view, should focus on creating conditions for a comprehensive dialogue which will lead to resolving the issue. Agreements with the United States are expected to be significant for this process, he added.

This is not to say that Seoul should not work with other nation to encourage Pyongyang to give up its nuclear ambitions.

"First of all, South Korea, North Korea, China and the United States need to reach a complete understanding and agreement on the ways of building peace. Then the six-party talks, including Russia and Japan, should be relaunched," he told Sputnik Korea.

© REUTERS / KCNA
N Korea Vows to Launch 'Preemptive Strike' on US Military Bases in Japan, S Korea, US Aircraft Carrier
Six rounds of the six-party talks were held in 2003-2007. In 2009, North Korea announced its formal withdrawal from the format following Pyongyang's unsuccessful launch of a satellite, which drew international condemnation. Several attempts to reboot the negotiations were made in 2012 and 2014, but failed to produce any results.

The North Korean military efforts have recently come into the spotlight following a series of missile test. As a result, the United States officially ended its policy of "strategic patience" toward North Korea in March, saying that all options are on the table.

This week, President Trump made several statements, saying that the US is ready to resolve the North Korean issue unilaterally. Meanwhile, the US Navy dispatched its Carl Vinson Strike Group to the Korean Peninsula, fueling concerns that Washington could carry out a missile airstrike against Pyongyang.

"If North Korea resumes its provocations, they are likely to draw a military response from Washington. In addition, it cannot be ruled out that 'secondary sanctions' could be imposed on Chinese companies engaged in trade relations with North Korea. However, taking into account the trends in US-Chinese relations and the economic situation in the United States, it would be hard for Washington to go for these options," the political analyst wrote in an opinion piece on the first face-to-face meeting between Donald Trump and Xi Jinping.