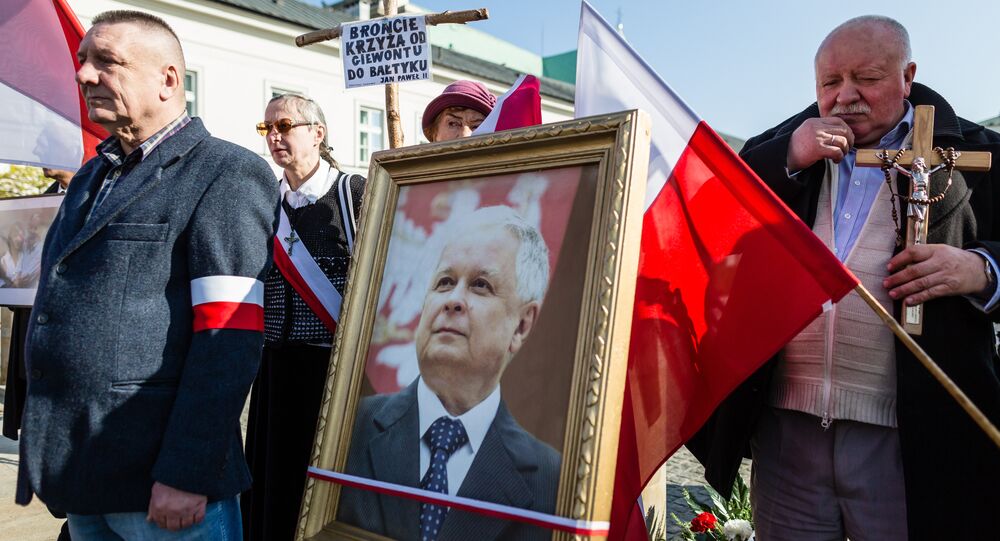 April 10 marks the 7th anniversary of the 2010 plane crash in Smolensk, Russia which killed Polish President Lech Kaczynski and dozens of high-ranking officials. Warsaw recently announced that it had restarted its investigation of the crash, in an attempt to blame Russia. Polish commentators told Sputnik why it's time to stop this madness.

On April 10, 2010, the Polish presidential Tu-154M, on its way to Russia to mark the 70th anniversary of the Katyn massacre, the mass execution of Polish officers by the Soviet NKVD during WWII, crashed outside Smolensk, western Russia, killing all 96 passengers and crew onboard. Official investigations by both Warsaw and Moscow concluded that pilot error and poor weather conditions caused the disaster.

In the years since, conspiracy theories have circulated in Poland among anti-Russian forces which suggested that the tragedy was really a plot by the Russians to assassinate Polish leaders. For many years, these claims were ignored by Warsaw, whose own inquiries found absolutely no evidence to back up the ludicrous claims.

© AFP 2021 / JOE KLAMAR
The Other Side of 2010 Polish Presidential Tu-154 Crash
However, following elections in 2015, the conservative Law & Justice Party, led by President Kaczynski's twin brother Jaroslaw, came to power. Since then, conspiracy theories about the accident have slowly but surely turned into an official dogma. Jaroslaw Kaczynski has long maintained that the Kremlin 'murdered' his brother, with other officials, including Defense Minister Antoni Macierewicz going even further, claiming that Moscow and Warsaw have been 'in a state of war' since the 2010 catastrophe.

Still, experts fear that the politicization of the 2010 tragedy threatens to further strain already rocky Russian-Polish relations. Naturally, Moscow isn't expected to take kindly to false claims that it murdered another country's president in cold blood in peacetime, but then again, this may very well be what Warsaw is counting on. Sputnik Poland spoke with Jan Hartman, a well-known Polish philosopher, journalist and professor at Krakow's Jagiellonian University to discuss the issue.

Last week, Hartman wrote a hard-hitting piece in his blog titled 'Stop the Smolensk Madness', blasting authorities for their harassment of the dead Polish officials even in their graves, and their "readiness to resort to slander and outright fabrications" in their "cynical exploitation of the dead," for political gain. The journalist called on Poles to honor the dead but to reject the government's attempts to ignite a new political scandal.

"First of all, I would like to emphasize that the majority of Poles have known for a long time that the tragic accident which took place outside Smolensk on April 10, 2010 was not the result of someone's deliberate malfeasance, of a conspiracy or assassination plot," Hartman told Sputnik Poland.

© AP Photo / Alik Keplicz
Polish Tu-154 Crash Investigation: Claims Against Moscow Not Just Distasteful, but Detestable
"This was a great tragedy, something that was clearly ascertained by the Polish government commission. There are no doubts that the accident occurred due to negligence, and due to the fact that the aircraft was landing in poor weather conditions," he added.

"For this reason, all reasonably thinking Poles feel uncomfortable about the behavior of their government, which seeks at all costs to prove that the report of the previous government, the report of the investigative commission, is false, and that the catastrophe in Smolensk was the result of an assassination plot. The additional charges against the Russian air traffic controllers are simply a continuation of this line of government propaganda – an attack on the Russian state, pure slander and another hostile act," Hartman stressed, adding that this will be sure to harm Russian-Polish relations.

Hartman said that he is convinced that most Poles cannot even imagine that Russia could have deliberately murdered their president and 95 other people in cold blood, for no reason whatsoever. "We are ashamed that our government is pushing such insinuations. We want for relations between our countries to be better. After the disaster, it seemed that one consequence of this tragedy would be a warming of relations between our peoples. The opportunity was there, but the chance was missed."

The journalist stressed that he is very concerned by the deterioration of relations, saying that bad state to state relations could lead to something much worse. Ultimately, Hartman stressed that politics between the two countries aside, most Poles see Russians as their friends. "Please be assured that the overwhelming majority of Poles see in Russians kindred spirits – as [fellow] Slavs, and just as interesting people with whom relations are valuable…What the Polish government is doing around the Smolensk disaster is simply embarrassing!"

"How can I put this more delicately…Antoni Macierewicz, who [earlier] said that he had evidence that an explosion had taken place on board the plane, that the plane crash was an assassination and that the president and passengers of the presidential liner had been murdered, was confronted with the fact that even members of the investigative commission he himself assigned…haven't been able to prove these claims. What can be done in this case? It's necessary to find a culprit, and better if it was a non-Polish one…The choice fell on the Russian dispatchers."

Recalling the investigations into the disaster, Rozenek pointed out that "first off, no one ordered the plane with the Polish delegation to land. Secondly, everyone understood the condition of the airport. It was known that the Smolensk North Airport was closed to regular air traffic, and hadn't been used in several years – that it was not completely safe. Our delegation made a conscious decision to land there anyway, and the pilots made a series of mistakes, which ultimately resulted in the catastrophe. Of course, there may be doubts about the work of the air traffic controllers. This is discussed both in the IAC report and in [the Polish government commission's] report."

"But there is a fundamental difference between mistakes and the deliberate provocation of a catastrophe. I do not see any evidence that dispatchers deliberately provoked the disaster," the journalist stressed.

© AFP 2021 / JANEK SKARZYNSKI
'The Point of No Return': Why Poland Plans to Spend Billions on Patriot Missiles
Ultimately, Rozenek indicated that the broad range of theories peddled by the defense minister in previous years (from remotely detonated TNT onboard the plane's wings, to helium sprayed into the air, and even allegations that Russian rescue workers murdered survivors on the ground) indicates that Macierewicz "is not really looking to reveal or explain the reasons for the accident." Instead, "he only sees the Smolensk disaster as a kind of weapon for internal political struggle, but one which is also becoming a weapon for external political struggle" (i.e. with Russia).

According to Rozenek, only the data on the black boxes, documents from the official investigations, and the views of experts, all of whom assert unanimously that the 2010 tragedy was an accident, can be seen as authoritative. Macierewicz's series of theories are "not at all interesting" in this regard, he concluded.