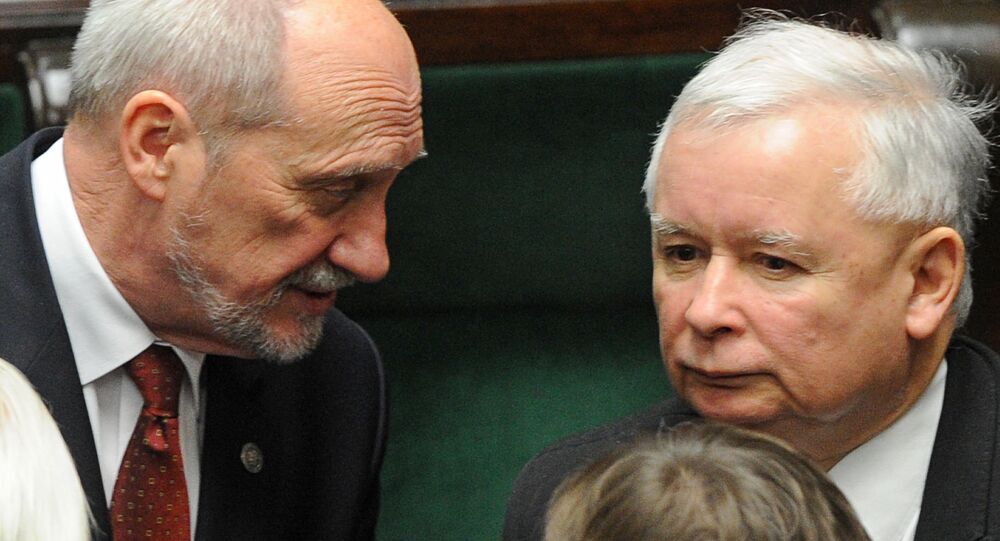 Polish prosecutors say they have evidence proving that Russia "deliberately provoked" the 2010 plane crash over Smolensk which resulted in the death of President Lech Kaczynski. Commenting on the claims, journalist Andrei Veselov lamented that Polish politics seems to have degenerated into paranoia over a mysterious 'hand of Moscow' at every turn.

Almost seven years ago, on April 10, 2010, the Polish Presidential Tu-154M airplane carrying President Kaczynski, his wife, and a number of high-ranking Polish civilian and military officials crashed outside Smolensk, western Russia, killing all 96 passengers and crew onboard.  Official investigations by both the Russian and Polish sides concluded that pilot error was to blame. The pilots, according to investigators, lacked adequate training for operations in adverse weather conditions, and did not approach the landing field in a safe manner amid foggy weather in the area on the day of the crash.

In the years since, conspiracy theories have circulated in Poland, particularly among the country's conservative anti-Russian forces, claiming that the crash was a deliberate plot by Moscow to assassinate Polish leaders. Until recently, these conspiracy theories were generally ignored by the country's leaders, who said that there was absolutely no evidence to support this claim in the official findings.

© RIA Novosti . Ilya Pitalev
People lay flowers to mark their condolences to Poland following the deadly crash of the Polish presidential Tu-154M which killed everyone onboard, April 2010.

However, following presidential and parliamentary elections in 2015, which resulted in the Law and Justice Party, led by Kaczynski's twin brother Jaroslaw coming to power, the 'Russian trace' conspiracy quickly transformed into official dogma. Jaroslaw Kaczynski has long maintained that the Kremlin deliberately 'assassinated' his brother. Defense Minister Antoni Macierewicz has gone even further, claiming that Poland and Russia have actually been 'in a state of war' since the 2010 catastrophe.

On Monday, Poland's Public Prosecutor's Office gave ammunition to the conspiracy theorists, announcing that prosecutors had amassed evidence against Russian air traffic controllers which showed that Russia had "deliberately provoked" the disaster. The Prosecutor's Office claimed the presence of a mysterious "third person" in the air traffic control tower on the day of the crash, but did not elaborate.

© Sputnik / Maksim Blinov
Poland Knows Russian Air Traffic Controllers Not Involved in 2010 Plane Crash - Moscow
Moscow responded in an extremely calm manner to the offensive claims. Foreign Ministry spokeswoman Maria Zakharova recalled that Russia had carried out its own, very detailed investigation, which concluded that the air traffic controllers had nothing to do with the crash. "Warsaw knows this very well," she noted. Presidential spokesman Dmitri Peskov added that as far as the Kremlin is concerned, the causes of the catastrophe had been determined, "and of course it is not seen as possible to agree with [the] conclusions" reached by prosecutors.

Polish authorities, Zakharova noted, were actively trying to "use the tragedy to settle political scores in their country. We consider this tactic futile [and] damaging to Russian-Polish relations, which are already not in the best condition," she added.

What are these political scores? Well, for one thing, they include Warsaw's longstanding conflict with European Council President Donald Tusk. Authorities have accused the politician of everything from shady contacts with Russian intelligence, to illegal dealings with Russian companies on the repair of the presidential plane shortly before it crashed, to bending to Russian interests following the disaster to prevent an objective investigation from taking place. "Prime Minister Tusk and Vladimir Putin made an illegal deal to the detriment of Poland, and he must answer for this before a court," Defense Minister Macierewicz has said.

In reality, anyone familiar with Tusk's record on Russia, both as prime minister and as the head of the EU, has a pretty good understanding that the politician is anything but pro-Russian. As European Council president, Tusk has been at the forefront of EU politicians accusing Russia of 'aggression', and has repeatedly said that sanctions must be extended. Meanwhile, during his time as prime minister, Tusk balanced a policy of 'rapprochement' with Moscow with an active effort by his foreign minister, Radoslaw Sikorski, to rip Russia's western partners out of Moscow's orbit via the so-called 'Eastern Partnership' program. That effort ultimately culminated in the 2014 Maidan Coup in Kiev.

© AFP 2020 / JANEK SKARZYNSKI
'The Point of No Return': Why Poland Plans to Spend Billions on Patriot Missiles
Furthermore, as RIA Novosti contributor Andrei Veselov points out, Warsaw has yet to present any hard evidence to back up its conspiratorial accusations, even against Tusk, much less about Russia's alleged role in the Smolensk tragedy.

Lawmakers from the Civic Platform Party, Poland's main opposition group, have sent a letter to Prime Minister Beata Szydlo, demanding an explanation for why the full version of the official Polish government report on the plane crash, published in July 2011, is being taken down from public sources online.  The party complained that the subcommission convened by Macierewicz is not working with the official report, and noted that its removal from official internet resources makes the Russian side's report the only official document on the investigation that's publically available.

However, as Veselov pointed out, Civic Platform lawmakers too are not being entirely honest: "The Russian report is not the only one. In 2011, the Interstate Aviation Committee (IAC) released its final report on the technical investigation into the disaster. According to its experts, the crash was caused by the crew's decision not to go to the alternative aerodrome. Furthermore, it said, there were shortcomings in flight support and the crew's training."

In other words, Warsaw's decision to dig up the investigation, and to ignore the findings of a diverse collection of aviation experts, all of whom have reached nearly identical conclusions, indicates that spokeswoman Zakharova is right: Warsaw is out to settle old political scores, not find any hidden 'truth'. And given the stakes involved (including the alleged murder of a statesman in peacetime by another state), the campaign is not only distasteful, but simply detestable.