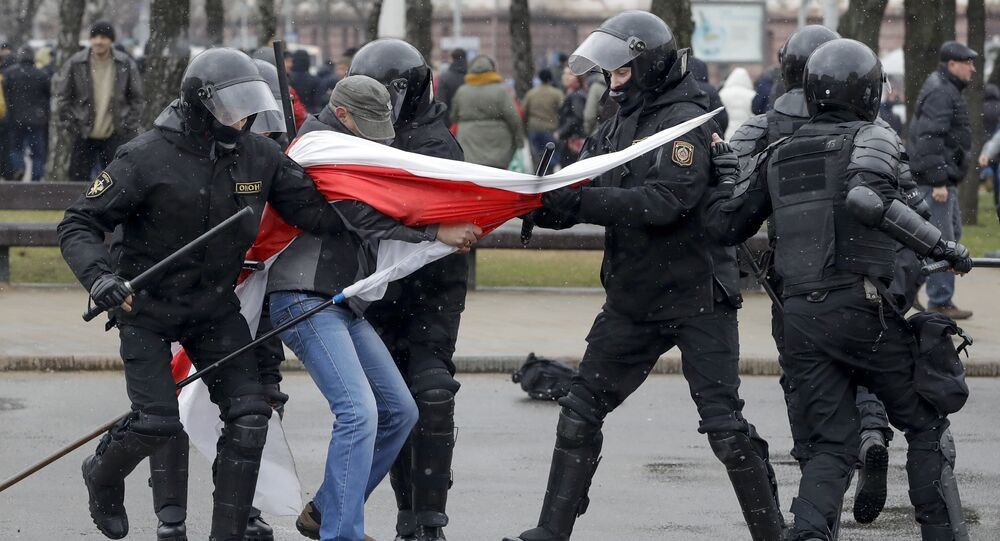 The US Embassy in Belarus is demanding that Belarusian authorities release all protesters detained at Saturday's unauthorized rally in Minsk. The request comes just days following revelations that US aid agencies have increased their spending on 'democracy promotion' initiatives in Belarus to the tune of several million dollars.

On Saturday, Belarusian police detained several hundred people after opposition activists attempted to carry out an unauthorized rally in the center of the Belarusian capital of Minsk. According to human rights organizations, some 700 people were detained; about 100 of them were still in custody as of Sunday morning. Some of the protesters who have been released now face administrative charges for participation in an unauthorized mass event, while others were let go without being charged.

In a statement late on Saturday, the US Embassy marked its "deep concern" with the Belarusian government's refusal "to allow peaceful demonstrations in Minsk for the annual 'Freedom Day' commemoration."

© Photo : Redline
Russia 'Must Outwit, Outmaneuver EU, US in Struggle for Belarusian Hearts & Minds'
Marking its distress over reports of the use of force against detainees, the statement emphasized that "the authorities' large-scale detention of peaceful protesters, human rights observers and journalists infringes upon basic democratic values."

"The United States will continue to closely monitor this situation, and calls on the government of Belarus to immediately release all remaining peaceful protesters, human rights advocates, and journalists, to guarantee the rights of citizens to peaceful assembly and free speech, and to uphold its international commitments," the Embassy's statement concluded.

The US request comes just days after revelations in Russian-language media that US agencies and NGOs, including USAID and the National Endowment for Democracy, have raised the amounts earmarked for media, human rights and civil society initiatives in Belarus. For example, USAID committed $9 million in support for 'democracy development' in 2017, compared with $8.3 million in 2016 and $7 million in 2015. The State Department and other government and private organizations have committed millions of dollars more on other initiatives, including the training of independent journalists.

© REUTERS / Vasily Fedosenko
Importing Democracy: US Breeding Activism in Belarus Raises Color Revolution Concerns
Belarusian opposition activists had been planning Saturday's protests over the course of several months. Activists hoped that large numbers of people, including those who are normally apolitical, would come out into the streets to protest recent unpopular government decisions, including a proposed tax on the unemployed.

Failing to get the necessary permits from authorities in the Belarusian capital, protesters hoped to go ahead with the protest anyway. But on Saturday, police blocked off the expected meeting point, detained several protest leaders at the Academy of Sciences metro station, and then began driving protesters off central streets, where they were broken up into smaller groups and detained. Other potential staging areas were also blocked off as protesters attempted to reorganize in other areas.

Before being broken up, protesters whistled and cried the slogans "Freedom," "For Shame," and "Resign," presumably directed at Belarusian President Alexander Lukashenko.

Some residents of the Belarusian capital criticized the protesters, blaming them for the traffic jams and the inconvenience they caused. One woman was reported to have yelled at the protesters, telling them they should have staged their rally somewhere else, and asking them "Do you want it to be like in Ukraine?"

© AP Photo / Sergei Grits
Lukashenko: US, German Funds Sponsor Provocateurs in Belarus
Earlier this month, Lukashenko ordered the detention of over two dozen persons whom he said were provocateurs being trained to organize riots during Saturday's protest. The agitators were being trained at several makeshift camps in Belarus, as well as in neighboring Ukraine, according to Lukashenko. On Friday, the president said that US and German funding sent through Lithuania and Poland had been used to finance the camps.

Last week, Belarusian border guards opened fire on an SUV attempting to ram through a checkpoint at Alexandrovka, on the Ukrainian-Belarusian border. Authorities found weapons and explosives in the vehicle, and the SUV's occupants were detained. An investigation has been launched into that incident.

Throughout preparations for the disturbances, Lukashenko complained that opposition activists were trying to use popular dissatisfaction over the tax law for political gain to try to "destroy" the country. "We need to pluck these provocateurs as one would pick raisins out of a bun; they must answer in accordance with the full extent of the law…There will be no Maidan in Belarus."