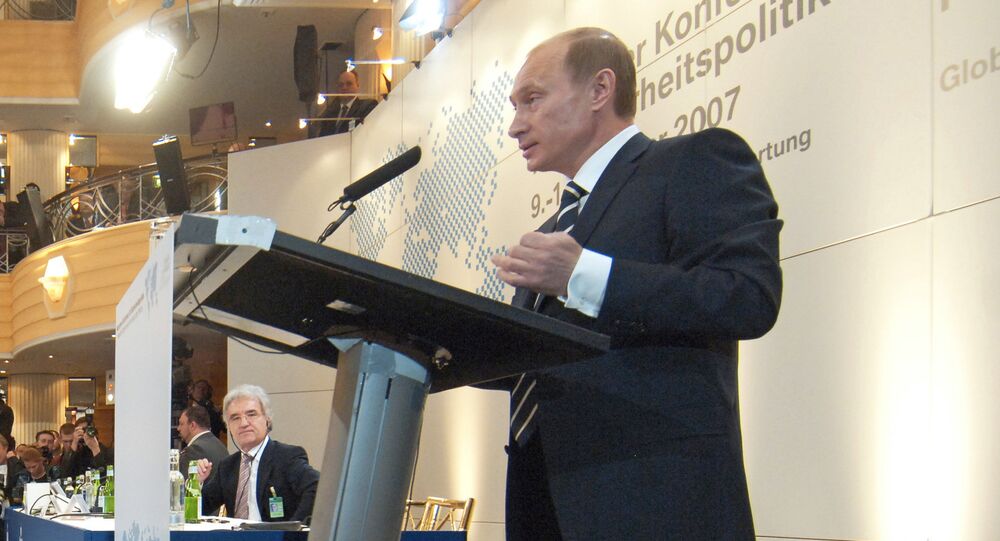 On February 10, 2007, Russian President Vladimir Putin delivered his Munich speech in which he outlined major principles of Russia's foreign strategy and predicted the inevitable demise of the unipolar world order. Ten years after the 2007 Munich Security Conference Putin's warnings remain more relevant than ever before.

In his speech the Russian President called attention to the crumbling system of international relations in the post-Cold War era and the inevitable doom of the unipolar world order. In many respects his warnings proved prophetic.

At the same time, Putin outlined major principles of Russia's foreign policy, including Moscow's long-term commitment to the multi-polarity and fundamental principles of the Charter of the UN.

Speaking at the Munich Security Conference the Russian President highlighted the importance of the UN, stressing that the international institution which was founded back in 1945 cannot be replaced with any political or military alliance, such as NATO or the EU.

"We do not need to substitute NATO or the EU for the UN," Putin said, referring to illegitimate and extensive use of force by some UN members.

"The use of force can only be considered legitimate if the decision is sanctioned by the UN… When the UN will truly unite the forces of the international community and can really react to events in various countries, when we will leave behind this disdain for international law, then the situation will be able to change," he said.

"Otherwise the situation will simply result in a dead end, and the number of serious mistakes will be multiplied," the Russian President warned.

He highlighted that depressed and war-torn regions in the Middle East remained a powder-keg and a potential source of global destabilization and called upon the world's countries to contribute to building a more democratic and fairer system of global relations, "a system that would give everyone the chance and the possibility to develop." 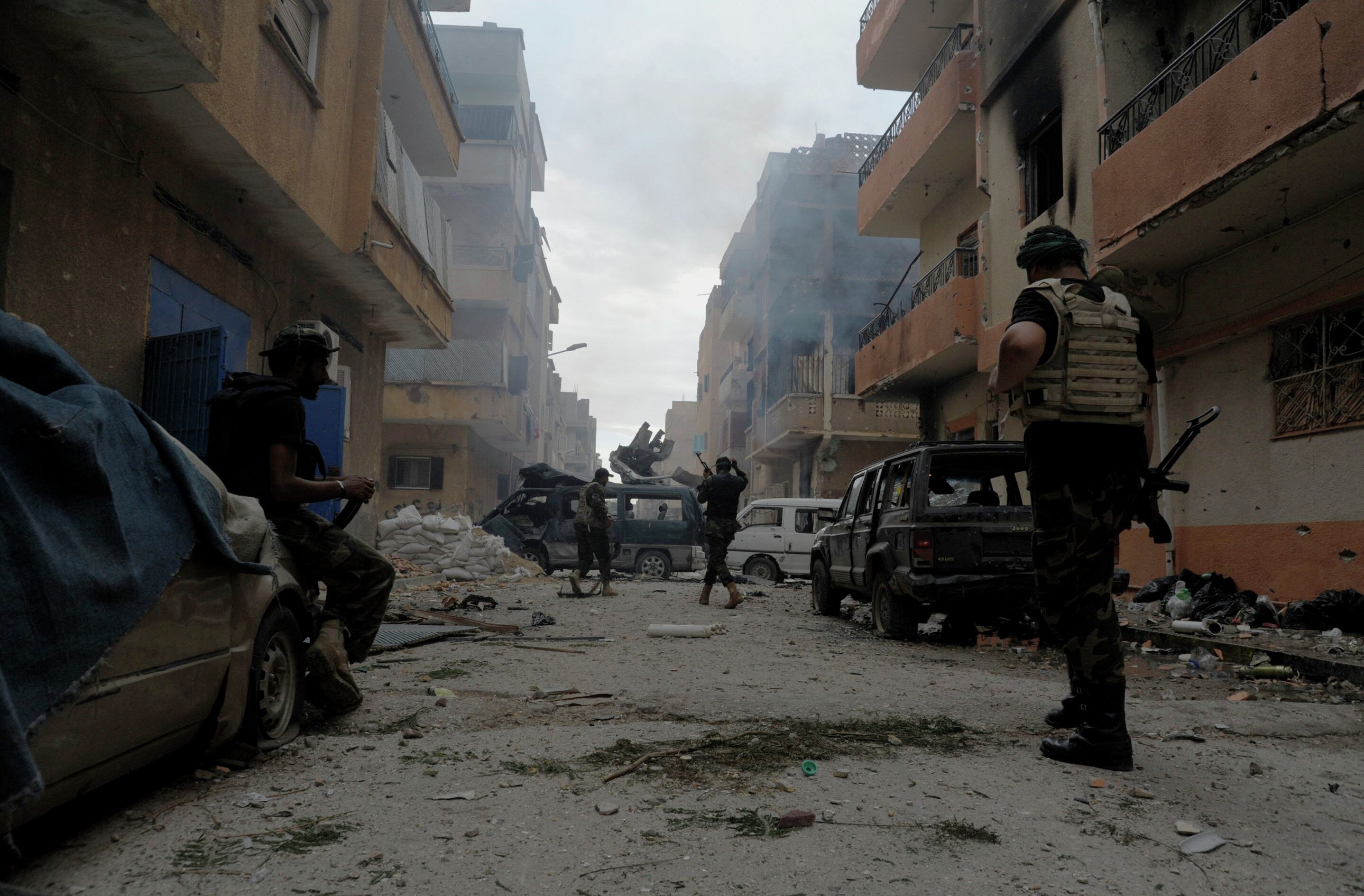 © AP Photo / Mohammed el-Sheikhy
The decrepit state of Libya today is largely a result of the NATO-led war that was launched in 2011. It is currently in the throes of a massive terrorist-on-terrorist war in Tripoli and Benghazi

'Uncontained Hyper Use of Force' Leads to More Violence

However, a series of overseas operations in Libya, Syria, and Yemen and military actions in Iraq and Afghanistan indicated that major NATO member-states failed to heed Putin's warning.

Operation Iraqi Freedom kicked off by Washington back in 2003 created a vacuum of power in Iraq which was immediately filled by al-Qaeda extremists — forerunners of modern-day Daesh (ISIS/ISIL). Islamic extremism has spread fast across the region and beyond.

The US-led invasion of Libya and the Syrian military campaign added fuel to the fire, prompting an unprecedented outflow of migrants from the Middle East and North Africa to Europe.

"Unilateral and frequently illegitimate actions have not resolved any problems. Moreover, they have caused new human tragedies and created new centers of tension. Judge for yourselves: wars as well as local and regional conflicts have not diminished… And no fewer people perish in these conflicts — even more are dying than before. Significantly more, significantly more!" Putin remarked prophetically in 2007.

"I think it is obvious that NATO expansion does not have any relation with the modernization of the Alliance itself or with ensuring security in Europe," Putin said in 2007, "On the contrary, it represents a serious provocation that reduces the level of mutual trust."

After the collapse of the Soviet Union the military bloc absorbed many of Russia's Warsaw Pact allies including the Czech Republic, Bulgaria, Romania, Slovakia, Slovenia, as well as former Soviet Republics —  Estonia, Lithuania and Latvia.

"And what happened to the assurances our western partners made after the dissolution of the Warsaw Pact? Where are those declarations today? No one even remembers them," the Russian President added. © AP Photo / Czarek Sokolowski
Soldiers park their amphibious vehicles on a ship as they participate in a massive amphibious landing during NATO sea exercises BALTOPS 2015 that are to reassure the Baltic Sea region allies in the face of a resurgent Russia, in Ustka, Poland, Wednesday, June 17, 2015

However, following Putin's speech the bloc's member states amended the North Atlantic Treaty to permit Albania and Croatia's membership in NATO in 2009. While the Alliance determined that Macedonia met the requirements for NATO membership its bid was blocked by Greece. Today, the Alliance is discussing Montenegro's accession, while keeping the door open for Ukraine and Georgia.

"Just like any war, the Cold War left us with live ammunition, figuratively speaking. I am referring to ideological stereotypes, double standards and other typical aspects of Cold War bloc thinking," Putin said ten years ago.

© CC BY-SA 2.0 / Heinrich-Böll-Stiftung / George Soros
US' Bill on Info War Against Russia Has Soros' Fingerprints All Over It
Again, from 2007 to 2017 nothing has really changed.

Speaking to Radio Sputnik Wednesday Pamela Geller, US journalist and President of the American Freedom Defense, said US policymakers and their European counterparts remain stuck in a Cold War mindset on Russia.

"It's amusing to me — demusing, I should say — that long after the Cold War ended… after ignoring, denying and downplaying the Soviet threat and ridiculing those who called attention to it," US policymakers have turned Russia into their "all-purpose bogeyman now," Geller told Radio Sputnik, adding that they consider Russia a "genuine threat" to their globalist agenda.

The Rise of Emerging Economies to Strengthen Multi-Polarity

It is not only Russia that triggers concerns in Washington and European capitals: in the eyes of US and EU policymakers the rise of Asia's and Latin America's emerging economies pose a challenge to the "unipolar" world order.

"The combined GDP measured in purchasing power parity of countries such as India and China is already greater than that of the United States. And a similar calculation with the GDP of the BRIC countries — Brazil, Russia, India and China — surpasses the cumulative GDP of the EU," Putin highlighted in 2007. 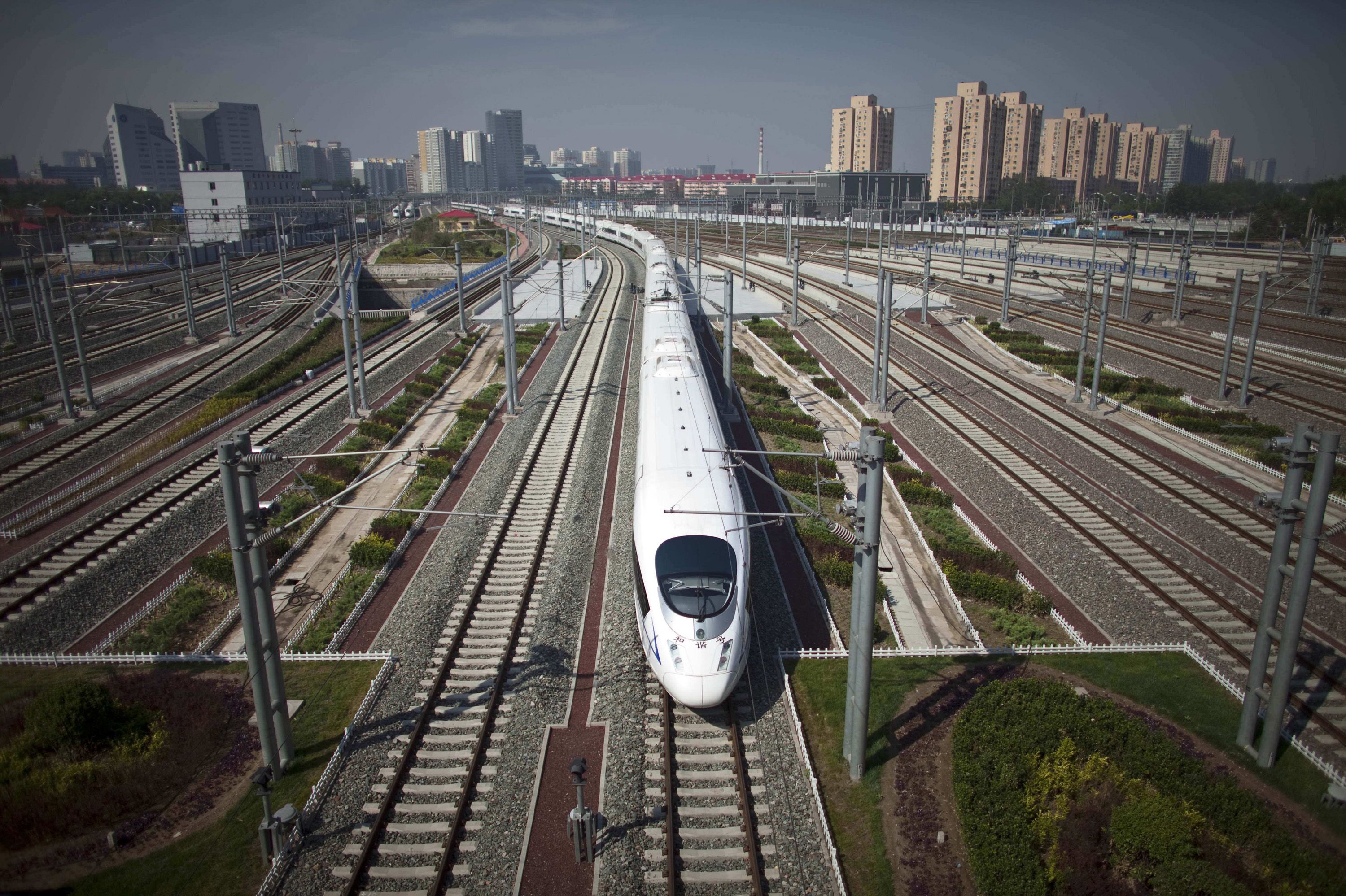 "There is no reason to doubt that the economic potential of the new centers of global economic growth will inevitably be converted into political influence and will strengthen multi-polarity," he said.

Indeed, according to the International Monetary Fund's estimates the US has failed to surpass China in terms of gross domestic product (GDP) based on purchasing power parity (PPP).

"The IMF now calculates that China accounts for 18.3 percent of world output compared with 15.4 percent of the United States," American economist Jeffrey D. Sachs notes in his recent op-ed for the Boston Globe.

Why the Demise of the 'Unipolar World Order' is Inevitable

In this context the Russian President drew attention to the fact that the post-Cold War unipolar world order was predestined to fail from the very beginning.

"I consider that the unipolar model is not only unacceptable but also impossible in today's world," Putin said, "However, what is a unipolar world? However one might embellish this term, at the end of the day it refers to one type of situation, namely one center of authority, one center of force, one center of decision-making."

"It is a world in which there is one master, one sovereign. And at the end of the day this is pernicious not only for all those within this system, but also for the sovereign itself because it destroys itself from within," the Russian President said.

"The end of the Cold War, in 1991, should have been the occasion for a fundamental reorientation of US guns-versus-butter policies… Alas, the blinders and arrogance of American imperial thinking prevented the United States from settling down to a new era of peace," Sachs wrote in his October article for the Boston Globe, dubbing America's problem an "imperial overreach." For its part, Henry Kissinger admitted in his speech at the Davos Economic Forum that the world has significantly changed since the end of the Cold War and opened the door to new powerful global players.

"One of the key problems of our period is that the international order with which we were familiar is disintegrating in some respects, and that new elements from Asia and the developing world are entering it," Kissinger said adding that it's time to recognize Russia's role in maintaining the equilibrium of the world.

Putin's Munich Speech is As Relevant as Ever

Speaking to Sputnik Chinese Jia Lieying, an expert at the School of International Relations, Beijing Language and Culture University, emphasized that Putin's Munich speech remains as relevant as ever.

"In my opinion, the theses of [Vladimir] Putin's speech [delivered] at the Munich Security Conference in 2007, are still very relevant today. After ten years, his words are by no means out of date," Jia said.

"Now, looking back at what has happened [in the past years], we see that the confrontation between the power has gradually intensified, having negative effect on regional security and maintenance of peace on global arena. Therefore, the new US president needs to remember well the Russian President's speech delivered ten years ago, because its meaning still cannot be overestimated."