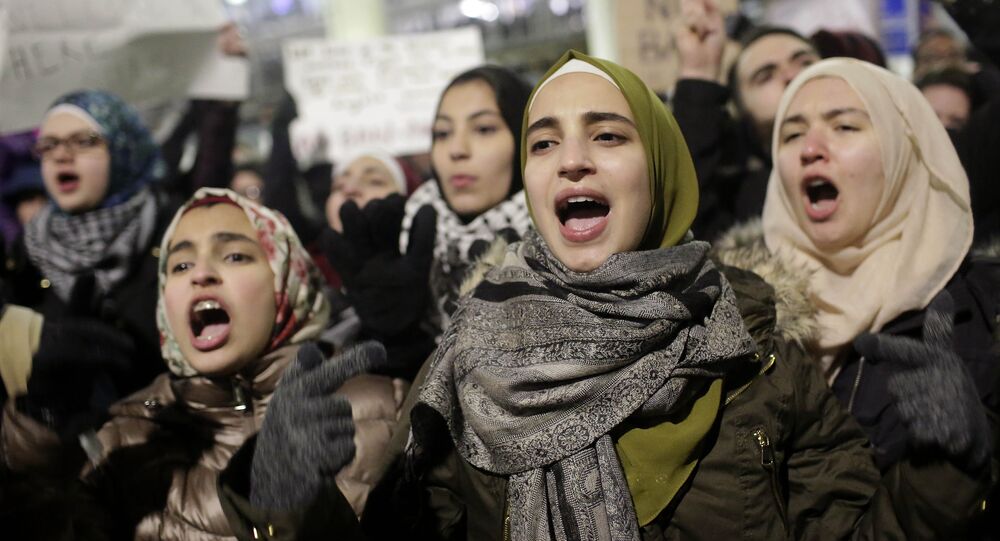 The ongoing protests over Donald Trump's executive order lack a genuine democratic message and sincere regret about the US' policies toward Muslims, Iranian political commentator Ali Reza Rezakhah told Sputnik. According to Rezakhah, what is going on is an all-out anti-Trump campaign launched by his political rivals.

However, according to Ali Reza Rezakhah, an Iranian political commentator and expert in international affairs,the  ongoing protests against Trump's order shouldn't be regarded as "regret" about Muslims.

In his interview with Sputnik Persian Rezakhah drew attention to the fact that during the Obama presidency a number of Muslim countries had been subjected to extensive bombing. However, nobody took to the streets to protest against the US' aerial campaigns.

The Iranian expert believes that what we  are witnessing today resembles nothing so much as an anti-Trump campaign launched by his political rivals and liberal media pundits.

"Donald Trump came into conflict with a number of American liberals and the mainstream media. One shouldn't expect that the [mainstream] media's coverage of protests against Donald Trump is adequate. One shouldn't believe what CNN and the New York Times say about it, since they exaggerate and overstate the scale of these protests," Rezakhah said.

It appears that US political analyst and conservative columnist Patrick J. Buchanan shares a similar stance.

"Was that weekend-long primal scream really justified?…  All five stories on page one of Monday's Washington Post were about the abomination. The New York Times' editorial, 'Trashing American Ideals and Security,' called it bigoted, cowardly, xenophobic, Islamophobic, un-American, unrighteous," Buchanan noted in his op-ed for The American Conservative nailing the media pundits for hypocrisy.

The Iranian expert cited the recent Rasmussen Reports national telephone and online survey which found that "most voters approve of President Trump's temporary halt to refugees and visitors from several Middle Eastern and African countries until the government can do a better job of keeping out individuals who are terrorist threats."

According to Rasmussen Reports, 57 percent of US voters favor the temporary ban on refugees from seven Muslim-majority countries — Syria, Iraq, Iran, Libya, Somalia, Sudan and Yemen — citing security concerns. Only 33 percent oppose the measure while ten percent are undecided.

© REUTERS / Jim Young
DoS Memo Warns: Trump's Immigration Order May Jeopardize Iraq-GE Deals
Likewise, 56 percent approve a temporary block on visas prohibiting residents from aforementioned states from entering the US "until the government approves its ability to screen for likely terrorists." Thirty-two percent are against this temporary ban, and 11 percent are undecided, the survey indicated.

Rezakhah noted that the US' foreign policy "has always been discriminatory." However, the countries affected by the order were designated as "state sponsors of terrorism" not by Trump but the Obama administration, the Iranian expert pointed out.

According to Rezakhah this list is politically biased and bears no relation to reality: Over the past 30 years none of the residents of the countries, affected by the measure, have committed any terror act on the territory of the US. The Iranian expert argues that in contrast, the Persian Gulf monarchies, which have long been known for fuelling extremism in the Middle East, have yet to be included in the list.

"The reason behind [this] is a political game, aimed at hiding the truth. Similarly one should regard the protest in defense of Muslim refugees and migrants. These protests are also politically biased and devoid of genuine democratic message," Rezakhah stressed.

© REUTERS / Jonathan Ernst
Why Trump's Executive Order Has Nothing to Do With 'Muslim Ban'
It is symbolic that there were no such protests and demonstrations during the Obama presidency, he noted.

The expert recalled that the Obama administration launched an all-out bombing campaign against Muslim nations in the Middle East, North Africa and Central Asia.

In his January article Micah Zenko, a Senior Fellow at the Council on Foreign Relations (CFR), reported that in Obama's last year in office the US has dropped 26,171 bombs in seven Muslim-majority countries.

"In President Obama's last year in office, the United States dropped 26,172 bombs in seven countries. This estimate is undoubtedly low, considering reliable data is only available for airstrikes in Pakistan, Yemen, Somalia, and Libya, and a single 'strike,' according to the Pentagon's definition, can involve multiple bombs or munitions," Zenko wrote.

Given this it looks strange that no large-scale protests were conducted in America over Obama's bombing campaigns, Rezakhah told Sputnik.

Therefore, the protests could be qualified as anti-Trump in the first place, the Iranian expert said, adding that the President's political rivals continue to target him after he won the 2016 elections.